Skip to content
Home > Word Songs > 25 Best Thursday Songs – Songs with Thursday in the Title
My Wedding Songs is a reader-supported website. As an Amazon Associate, we earn revenue from qualifying purchases. Purchases made through links on this page may earn us a commission but also support the artists.

Thursdays get no respect. Thursdays are even known as Friday Eves. Wednesdays are hump days. Mondays begin the workweek. We want to give the day much respect by creating a list of popular Thursday songs – songs with Thursday in the song title. 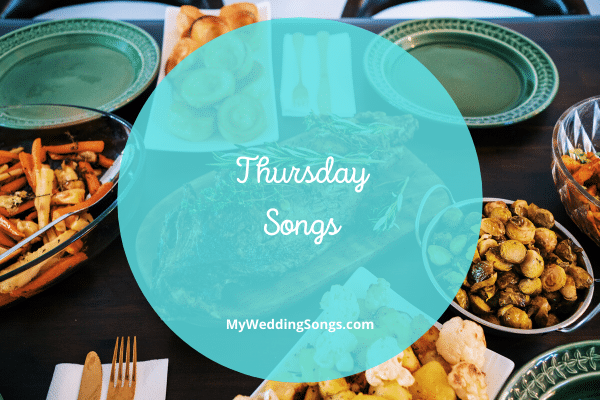 Outlook For Thursday – DD Smash
1983, Live: Deep In The Heart Of Taxes
Rock

(Thursday) Here’s Why I Did Not Go to Work Today – Harry Nilsson
1976, The Point
Rock

Like a Summer Thursday – Townes Van Zandt
1969, Our Mother the Mountain
Country

Do you have a favorite Thursday song, not on our list, or one that you love? Please share your song below so that we can add it or move it up!

Other days of the week song lists: