Skip to content
Home > Wedding Music > 30 Combined Parents Dance Songs at Weddings – Classic & Modern
My Wedding Songs is a reader-supported website. As an Amazon Associate, we earn revenue from qualifying purchases. Purchases made through links on this page may earn us a commission but also support the artists.

What is a combined parents dance at a wedding?

A combined parents dance happens during a wedding reception.  The father-daughter dance and the mother-son dance are combined into one song playing while the dance occurs.  This is a great way to save time by combining two formal dances into one. 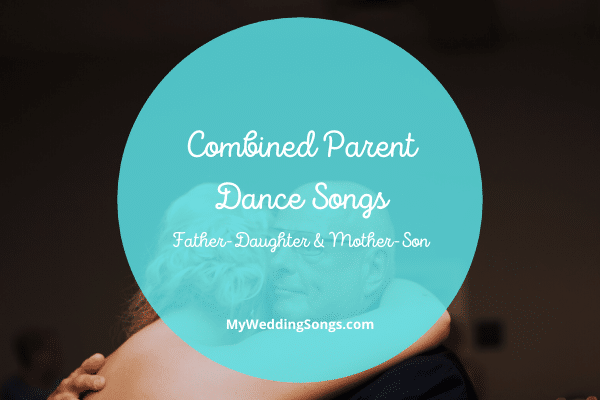 What is a good song for a combined parent dance?

And if you want to, tell me what you gon’ do
You could put it all, put it all on me
You can count on me, one, two, three

Most People Are Good – Luke Bryan
2018, What Makes You Country
Country

The House That Built Me – Miranda Lambert
2010, Revolution
Country

So when hard times have found you and your fears surround you
Wrap my love around you, you’re never alone

My wish, for you, is that this life becomes all that you want it to,
Your dreams stay big, your worries stay small

Find Your Wings – Mark Harris
2005, The Line Between The Two
Christian

You Raise Me Up – Josh Groban
2003, Closer
Operetic Pop

And you, you’ll be blessed
You’ll have the best
I promise you that

I’ll Stand By You – The Pretenders
1994, Last of the Independents
Rock

But whatever road you choose, I’m right behind you win or lose,
Forever young

Shower the People – James Taylor
1976, In the Pocket
Soft Rock

You Are The Sunshine Of My Life – Stevie Wonder
1972, Talking Book
R&B

And I think to myself
What a wonderful world

For people and things that went before
I know I’ll often stop and think about them
In my life, I’ll love you more

They look so natural together
Just like two newlyweds should be

Smile, what’s the use of crying
You’ll find that life is still worth while
If you just smile

Do you have a favorite combined parent dance song, not on our list? Please share your song below so that we can add it!

What is a parents dance at a wedding?

A parents dance is when the bride dances with her father and the groom dances with his mother.  If either parent is not able to attend, a sibling, friend, or another parent can fill in as a replacement.   These are commonly known as the father-daughter dance and mother-son dance.