Skip to content
Home > Love Songs > Top 17 1980s Love Songs + Lyric Quotes
My Wedding Songs is a reader-supported website. As an Amazon Associate, we earn revenue from qualifying purchases. Purchases made through links on this page may earn us a commission but also support the artists.

It’s hard to believe the 1980s were twenty-plus years ago. With phrases like totally and awesome, we will never forget them.  We already have a list of the best hair band power ballads.

However, we wanted to encompass all of the best 1980s love songs.

Many songs on our list are tried and true to this day. Many brides and grooms danced to the songs below as their first dance as a married couple. 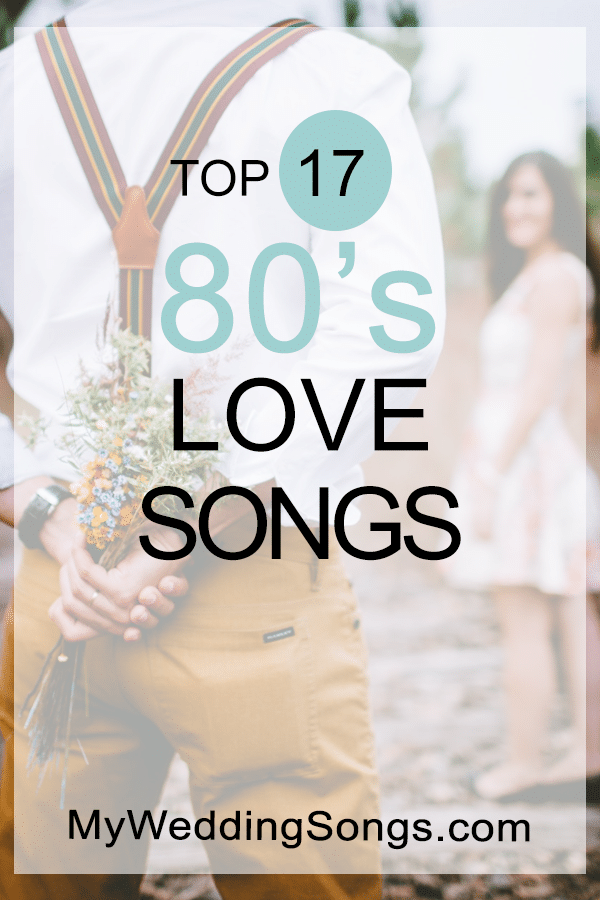 We tried our best to give a cross-genre sampling of many styles including fold, r&b, and rock.

If you have a favorite that you think we missed, don’t hesitate to comment on your favorite removed from the list. You can also comment on why you think a song on the list should be there.

Are you interested in more 1980s music? Be sure to check out our list of 100 of the best songs of the 80s. However, below you will find our list of the best 1980s love songs.

In Your Eyes – Peter Gabriel
Released in 1986, So
Rock

In your eyes
Oh, I want to be that complete
I want to touch the light
The heat I see in your eyes

Through the years, as the fire starts to mellow
Burning lines in the book of our lives
Though the binding cracks and the pages start to yellow
I’ll be in love with you

Crazy For You – Madonna
Released in 1985, Vision Quest Soundtrack
Pop

Lady
For so many years, I thought I’d never find you
You have come into my life and made me whole
Forever

The Search Is Over – Survivor
Released in 1984, Vital Signs
Pop

Let ’em say we’re crazy, what do they know
Put your arms around me baby don’t ever let go
Let the world around us just fall apart
Baby, we can make it if we’re heart to heart

And lovin’ a music man ain’t always what it’s supposed to be
Oh, girl, you stand by me
I’m forever yours
Faithfully

Eternal Flame – The Bangles
Released in 1988, Everything
Pop

Close your eyes, give me your hand, darling
Do you feel my heart beating
Do you understand?
Do you feel the same
Am I only dreaming
Is this burning an eternal flame?

The Lady In Red – Chris De Burgh
Released in 1986, Into the Light
Rock

I’ve never seen so many people want to be there by your side
And when you turned to me and smiled, it took my breath away
And I have never had such a feeling
Such a feeling of complete and utter love, as I do tonight

Tonight there’ll be no distance between us
What I want most to do, is to get close to you

‘Cause you
You mean the world to me
I know I know
I’ve found, I’ve found in you
My endless love

If you have a favorite 80s love song, please share the song below and why it is special to you.