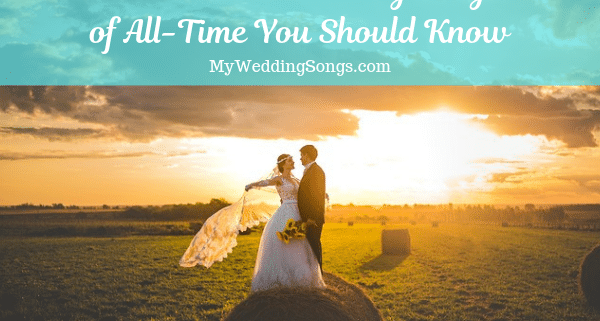 Songs cement memories of your wedding day for you — as the wedding couple — and your guests. Here are the greatest wedding songs of all time. How do you choose the best one? We have some tips for you.

What Makes a Song a Great Wedding Song?

A great wedding song captures the joy of love, excitement of the wedding day, and faith in the relationship. The greatest wedding song may be a love song or a song that fills the dance floor with guests partying and dancing the night away.

Today’s wedding couples want a different experience than every other bride. What gives? If you want to be different, do not select a song below as these are the most popular songs ever to be played at weddings. If, however, you’d like to work for the crowd, choose from our list of the greatest wedding songs of all time. These songs will be known by every guest and will give you and them goosebumps.

We reviewed wedding songs through the years that are both in current circulation and stand the test of time. We also looked at songs that were recently released. We predict that will be played for years to come. Our list of the greatest wedding songs of all time represents an array of music genres and eras. 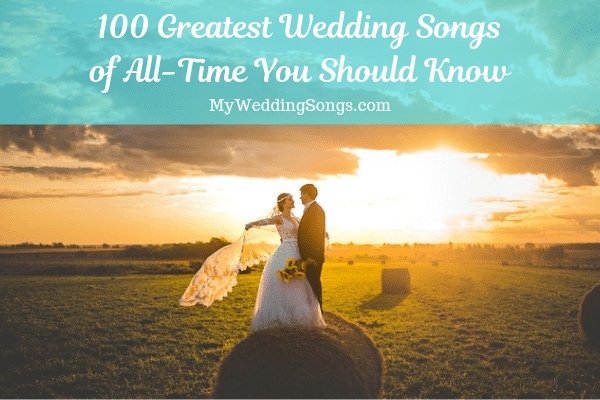 Before you comment about your favorite song not being on our list of top all-time wedding songs, please know that we chose only 101 songs. Yes, there are fantastic wedding songs not on our list. You may be thinking of Anne Murray’s “Could I Have This Dance.” Before you mention Patsy Cline’s “Crazy,” read the lyrics. It’s not the best song for a wedding.

The soulful Etta James captures the emotion of finding your forever love in song. “At Last” has stood the test of time. It’s amazing to think that this song came from her very first album.

Although this song is the newest song on the list, we believe it will be played for years to come. Sheeran is a global superstar and this song has the perfect video and love story.

Although the song was originally produced by Nitty Gritty Dirt Band, Rascal Flats turned it into a mega-wedding-hit. This song captures the gratitude for past relationships as the path for meeting one another through God.

John Legend will go down as one of the greatest R&B artists of his time. “All of Me” highlights his talent with words. Love isn’t about perfection; it’s about the acceptance for one another’s defaults.

Elvis, the king of Rock and Roll, slowed the tempo way down for this sensual love ballad. In 2017, Haley Reinhart’s cover of the song became extremely popular for the wedding circuit.

Brought from the big screen to the hearts of wedding couples and wedding guests for a love that will last forever.

This song, sung by Louis Armstrong, gives a great vibe of happiness and causes us all to smile — unless you say “Good Morning, Vietnam” then all you think of is war. Be aware of this connection if your parents served in the Vietnam Conflict.

The song resurfaced as a wedding song in 1991. It then was featured in “My Best Friend’s Wedding” in 1997. Since then, the song can be played for the father-daughter dance, money dance, or any song shining the spotlight on the bride.

What Are The Most Popular Wedding Songs Now?

We have scoured the Earth reviewing DJ wedding playlists, music charts, and popular streaming songs to bring you our list of the greatest wedding songs of all-time. This list incorporates all aspects of a wedding including the processional, recessional, grand entrance, first dance, parent dances, and party songs. There’s a lot of opportunities to use music at a wedding.

What Is Best Wedding Song Ever?

Ed Sheeran’s “Thinking Out Loud” is the greatest wedding song ever -or- is it Etta James’ “At Last”? Even though it was released in 2014, many couples relate to the emotion of “Thinking Out Loud” and will have everyone dancing to this great love ballad. The song stayed on the Billboard charts for 118 weeks (more than 2 years!). That’s tough to beat.  “At Last” is a timeless classic of finding your forever love.

What type of song makes for the best wedding song ever?

It must be the epitome of love. The song must express love for another as that is what a wedding is all about. Getting married was a popular theme recently with Marry Me by Train, Marry You by Bruno Mars, and also not on the list Marry Me by Jason Derulo.

Movies also played a big role in the list of best wedding songs ever. Movies feature mega-hits like Armageddon with I Don’t Want To Miss A Thing and Swing Time with The Way You Look Tonight.