One of the most popular types of wedding music we see at a Scottish wedding is that of ceilidh music. Ceilidh has become the traditional type of music for Scottish weddings over the years.

So there is a high chance you will have hired a ceilidh band for your wedding. With this in mind Music for Scotland who offers the top wedding bands in Glasgow have put together a list of the best first dance songs that you could have a ceilidh band perform. 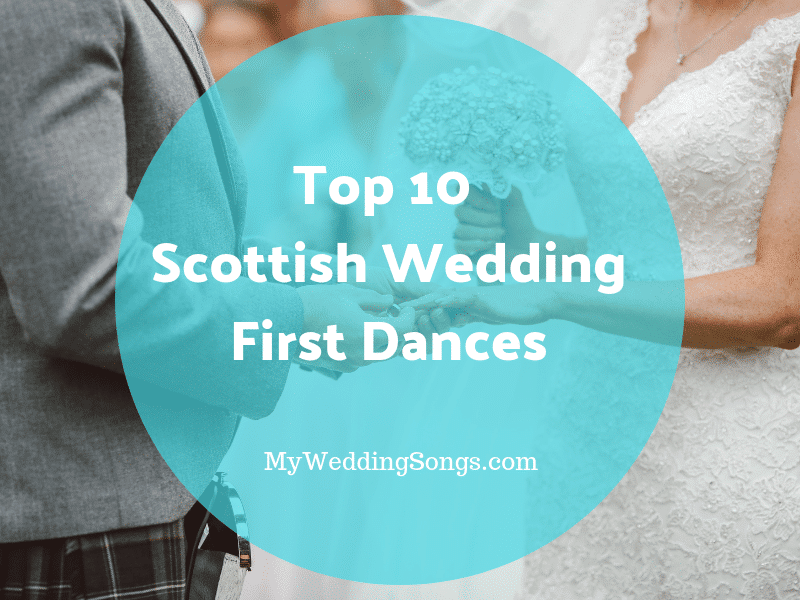 The first dance is a personal moment for the bride and groom and often a special song is chosen which holds meaning for the happy couple.

So without further “I do”… Here are our top 10 first dance ideas for a ceilidh band to play at your Scottish themed wedding;

Great song – made famous from the film PS I love you. Contemporary Celtic sound and feel that everyone can dance along to. ‘Her hair was black and her eyes were blue…’ great for most Irish brides.

2. My Love Is Like A Red Red Rose (Robbie Burns)

Eddi Reader (of Fairground Attraction) does a lovely version. Very much of the ‘old school’ but incredibly romantic, penned by an acknowledged genius.

Not strictly folk, but we’ve slipped it in here for the beautiful melody, and the fact it’s so well known, with potential for stunning harmonies with the right band.

Good old Van Morrison. He might not be the best-tempered man on the music circuit, but he certainly knows how to woo in words. Who could resist melting when they’re told; ‘you fill my heart with gladness, take away my sadness, ease my worries that’s what you do.

A slow, sincere song with beautiful lyrics, all about finding the right person, and feeling that you’ve ‘come home’ at last. It also featured in the film ‘My Sister’s Keeper’. There’s a more pared-down version too, by Edwina Hayes.

This has become a classic, from the film Once. Written by Glen Hansard of The Commitments fame; ‘Take this sinking boat and point it home, we’ve still got time……. Falling slowly, eyes that know me, and I can’t go back.’ Over 3.5 million hits on YouTube – it’s a winner!

A traditional tune with Scottish origins, this can be performed as a musical piece, or sung. Lovely up-tempo with a jig feel, ‘step we gaily on we go, heel to heel and toe to toe; round and round and off we go; off to Marie’s wedding.” Perfect for a high-energy start to the night.

Strangely enough, this is about a dying man. But he’s having such a good time at his own wake, he puts off dying until the next day. The actual sentiment is lost in the feel of the song – (nobody really gets the story) – it’s just the Reggae/Celtic feel that dominates. Great words, ‘I’ve had a life that’s full, fire up that fiddle boy and give me one last drink, the world is mine tonight….’ Can’t argue with that, can you?!

A modern classic. Don’t worry about the time of year – there are lots of poetic licenses where this song is concerned. You can be sure of audience participation in this one, even if they don’t know all the words everyone will be joining in on the “you’re a bum you’re a punk” bit at the very least.

A dear old Irish song, sung delightfully by Barney McKenna from the Dubliners. It’s a great tune to waltz to, or simply to lean and sway upon each other if you’ve had too much drink. There won’t be a dry eye in the house.

Choose the Best First Dance Ceilidh Song for You

Just be sure when you’ve made your choice to give your Ceilidh wedding band plenty of notice as if they don’t already have the tune in their repertoire, they’ll need time to learn it and do it justice.

The first dance is such an important part of the wedding that they’ll want it to be absolutely
perfect for you.

Be sure to read these other first dance song lists:

Robbie has the ear for unearthing musical talent and in his spare time loves writing about his first love, music.

E. Walter Smith Interview About His Songs For Your Wedding Day