Skip to content
Home > Wedding Music > Top 33 Brother Songs For and About Brothers + Lyric Quotes
My Wedding Songs is a reader-supported website. As an Amazon Associate, we earn revenue from qualifying purchases. Purchases made through links on this page may earn us a commission but also support the artists.

Brothers are commonly left out at weddings in themed songs.

We have you covered — as always with a list of songs about brothers. 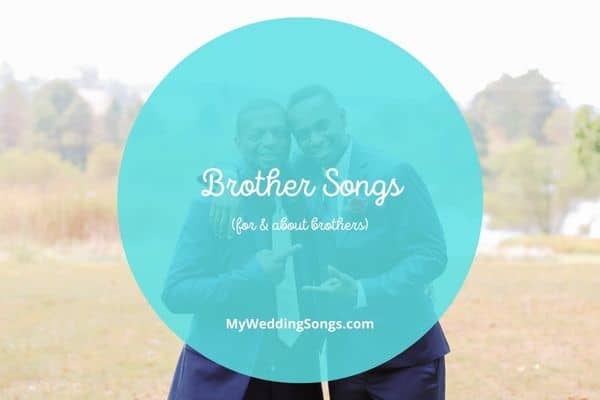 What Are the Best Brother Songs?

Below you will find our favorite brother songs that can be used to celebrate a groom and his brother(s).

We’ve talked to wedding couples through social groups and analyzed hundreds of wedding DJs’ playlists across the U.S. that provide reception music.

We selected a list just for you of the most popular and unique brother songs for your reception.

Every groom’s music tastes are different.

Thus, we selected brother songs that include many different genres.

Survival of the fittest what it is
I got your back, you got my back, and that’s the biz’

And it’s a ride, ride, ride, and there ain’t much cover
With no one running by your side my blood brother

My brother, if you could take a little time to slow down
It’s more your style

Louie nearly caused a scene
Wishin’ it was a dream
Ain’t no difference if you’re black or white
Brothers, you know what I mean

Sighing, the swirl through the streets
Like the crust of the sun
The Bewlay Brothers

Hey big brother, as soon as you arrive
You better, get in touch with the people, big brother
And get them on your side

Little brother, a ship can’t sail without the water
The world could be yours if you want her

Brother, let me be your fortress
When the night winds are driving on
Be the one to light the way
Bring you home

Picked me up on the side of the road
We jammed out the whole ride home
Damn, where did time go, brother?

Fell for the same girl once or twice
And somehow made it out alive
But in the end, always there for each other
Brother, oh, brother

My little Brother just discovered Rock & Roll
There’s a noise in his head and he’s out of control.
And yes it frustrates, let’s let him make his own mistakes

Brother, let me be your fortress
When the night winds are driving on
Be the one to light the way
Bring you home

’cause I know you’re just a kid
But I can’t always tell
What’s on your mind, half of the time, brother mine

Brothers on a Hotel Bed – Death Cab For Cutie
2005, Alternative/Indie

Brother, brother oh brother of mine
We used to be down as partners in crime
From our parents our name was forged
I was the Beaver, you Curious George

I can tell my sister anything, and I don’t scare me
But you’re the person I’d like to be
Tenderness, you’r? my brother

Hey Brother, there’s an endless road to re-discover
Hey Sister, do you still believe in love I wonder?

Me and baby brother
Used to run together

I hope you enjoyed our list of brother songs. If you have a song not on our list, please comment on it below as we do read and respond to all comments.

Who are some of the most famous “Brother” groups?

Brothers make great musicians and that is apparent when you listen to Van Halen, The Everly Brothers, and The Allman Brothers Band.

Why Would I Want a Brother Song?

Brothers sort of getting the short stick with regard to weddings, don’t they?

They tend to be “honored” with guest-book duty or being an usher. It does seem odd to put a family member to work as a way of honoring them.

Then again, it was a tradition for the bride’s family to offer hospitality at the wedding.

Mothers and grandmothers are seated first at the wedding. Fathers give the bride away and get to dance with the bride in the spotlight at the reception.

What about brothers? Ushers? That’s it?

You can do better. You can include your brother in an honorable way at your wedding.

How Do I Honor My Brother At My Wedding?

Whether you want to involve your brother at your wedding or honor him is up to you. Honor doesn’t only apply to the deceased. You can honor the living. With the way our families are blended these days, your brother might be the person who walks you down the aisle. He may be your best man or he may be asked to be the officiant.

Our preferred way to honor someone at a wedding is, you guessed it, a special song. It can be as obvious or subtle as you like. Talk to your professional wedding planner and DJ to find what best suits you.

If your brother walks you down the aisle, maybe he can help you choose that song. Maybe your brother stands in for your father in the father-daughter dance. If you and your brother are goofballs, then you may even do a coordinated dance. Don’t forget Brother’s Day is celebrated on May 24, so if your wedding is near that date, you may want to have a plan.

What If I Don’t Have a Brother?

Honoring a brother can be more than the full-sibling role. He can be your mentor, a family friend, a teammate, or a fellow officer in the military or police.