Skip to content
Home > Love Songs > Top 20 1970s Love Songs + Lyric Quotes
My Wedding Songs is a reader-supported website. As an Amazon Associate, we earn revenue from qualifying purchases. Purchases made through links on this page may earn us a commission but also support the artists.

We will offer our favorite 70’s love songs by year with 2 songs from each year. 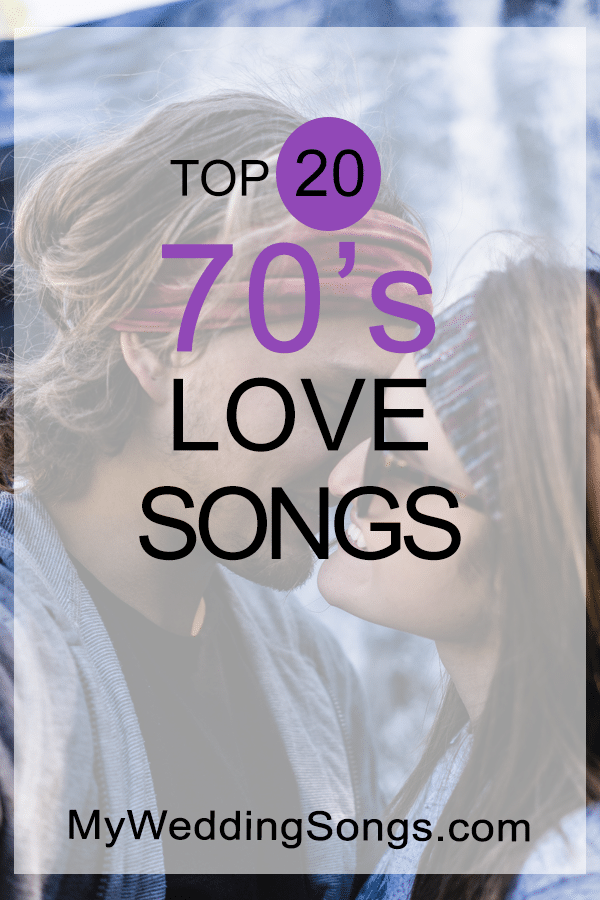 The 70s were about love and peace and war. Those feelings were expressed through popular music.

However, we want to showcase the love songs of the 1970s that reflect the love in a relationship only.

We feature songs in many different styles including rock, R&B, and pop music.

Your time has come to shine
All your dreams are on their way
See how they shine
Oh, if you need a friend
I’m sailing right behind

I’ll be there with a love that’s strong
I’ll be your strength
I’ll keep holdin’ on (holdin’ on)
Yes I will, yes I will

You just call out my name
And you know wherever I am
I’ll come running, oh yeah baby, to see you again

Ooh, loving you forever
Is what I need
Let me, be the one you come running to
I’ll never be untrue

5. The First Time Ever I Saw Your Face – Roberta Flack
Released in March 1972, Album: First Take
Won Record of The Year and Song of the Year.

Lean on me, when you’re not strong
And I’ll be your friend
I’ll help you carry on

7. You Are The Sunshine Of My Life – Stevie Wonder
Released in March 1973, Album: Talking Book
Won Best Pop Vocal Performance by a Male.

9. I Honestly Love You – Olivia Newton-John
Released in September 1974, Album: If You Love Me, Let Me Know
Won Song of the Year and Best Pop Vocal Performance by a Female.

10. You’re the First, the Last, My Everything – Barry White
Released in December 1974, Album: Can’t Get Enough

I see so many ways that I
Can love you ’til the day I die
You’re my reality, yet I’m lost in a dream
You’re the first, the last, my everything

14. Love Theme From A Star Is Born (Evergreen) – Barbra Streisand
Released in December 1976, Album: A Star Is Born Soundtrack
Won Song of the Year in 1977.

15. When I Need You – Leo Sayer
Released in February 1977, Album: Endless Flight

When I need you
I just close my eyes and I’m with you
And all that I so want to give you, babe

17. Always and Forever – Heatwave
Released in January 1978, Album: Too Hot to Handle

Take time to tell me you really care
And we’ll share tomorrow together
I’ll always love you, forever, forever

Yes, your once, twice
Three times a lady
And I love you!

19. Stumblin’ In – Suzi Quatro & Chris Norman
Released in January 1979, Album: If You Knew Suzi…
This is the fastest tempo song on the list but one of our favorites of the 70s.

I’ve fallen for you, whatever you do
‘Cause, baby, you’ve shown me so many things that I never knew
Whatever it takes, baby, I’ll do it for you

Why do stars fall down from the sky
Every time you walk by?
Just like me, they long to be
Close to you

I know that my emotions
Are somethin’ I just can’t tame
I just got to have ya, baby

She don’t ask for things, no diamond rings
(So together, like a hand in glove)
Like pages in a letter
(Ain’t no woman like the one I love)

This Will Be (An Everlasting Love) – Natalie Cole
1975

I believe in you
You know the door to my very soul
You’re the light in my deepest, darkest hour
You’re my savior when I fall

I would not leave you in times of trouble
We never could have come this far, mmm
I took the good times, I’ll take the bad times
I’ll take you just the way you are

And then she asks me, “Do I look alright?”
And I say, “Yes, you look wonderful tonight”

You Decorated My Life – Kenny Rogers
1979

Do you have a favorite love song of the 1970s? Please share your song below in the comments!