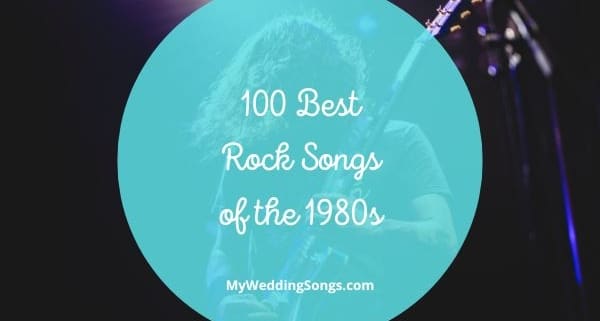 If you grew up in the 1980s, or even if you just heard a few people from this time talk about it, you will understand that the 80s were a glorious time.

The ‘80s was a golden time that gave us the biggest trilogies and movies that we still remember.

From Star Stars: The Empire Strikes Back, Spielberg’s ET, and Indiana Jones to Ghostbusters and Gremlins, we all have heard of these films at some point in our lives.

But it isn’t just the 1980s movies that have become real classics. Also, the music from this decade is still part of fond memories of many generations.

This is particularly true for rock music which emerged in the late ‘70s, and gained momentum in the ‘80s.

New bands came onto the scene and developed some unique styles. We saw metal and hard rock at the top of the charts during this time.

Some of these songs are still very popular playing on the radio or at events, such as birthdays or weddings.

Let’s take a look at the 100 best rock songs from this memorable decade. 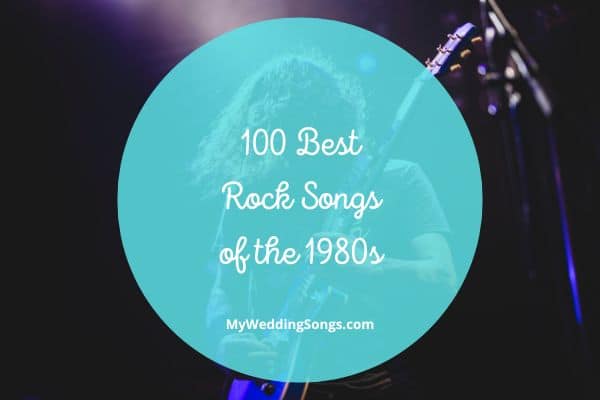 What Are The Best Rock Songs From the ’80s?

Just like today, the ‘80s saw a huge boom in rock bands touring across the country but also internationally.

Album-oriented rock (AOR), also known as anthem rock or arena rock, saw a real leap in popularity at this time.

Rock fans were looking for something a little more gentle but at the same time, the music had to be dramatic enough.

This is what made rock songs generally popular with young people across the country, and the world.

In the USA, rock songs became a new trend on the radio where they managed to reach a greater audience.

Depending on your taste at that time, there was a contrast in music emerging between heavy metal, which was already fashionable, and soft rock ballads which just started to appear on the music scene.

The mainstream music audience was more interested in melody and anthem-like choruses which were the signature of power ballads at the time.

This diversity between soft rock with hard-hitting notes and heavy metal shaped the 1980s until its end.

Our list of extraordinary ‘80s rock songs starts with some of the most famous songs that we all know, and love.

While some of these songs were a one-off success, the majority of the top ten best rock songs from the ‘80s were written by bands that went on to have other successful songs.

One of these bands was Bon Jovi, who had a number of different titles on the top charts at any time in history.

His song “Livin’ on a Prayer” is a typical rock mainstream example that almost everyone in the audience can relate to.

Although it does have hard-hitting notes, there is vibrant energy flowing through the entire song that simply lifts you out of any bad moment.

That’s why it is not just number three in our top ten but it is still one of the most popular songs played on the radio today.

Following on from the top ten, we find songs that played up and down the radio in the ‘80s, ‘90s, and even today.

When you listen to a couple of these songs, you may even recognize some as they were used as film music.

Although a lot of rock songs were structured very simply, the ‘80s were a time when structures in songwriting changed.

Journey’s song “Don’t Stop Believin’” makes this very clear because the chorus comes up only near the end.

It is the band’s most famous title, and the instrumental really captures the audience’s attention. It gives you this wonderful energy boost, rocking along with the melody.

This is what makes this song almost unforgettable.

As we continue our list of the most popular rock songs from the ‘80s, there are slightly less known titles from still very famous bands.

One genre that became particularly popular was glam metal. This heavy metal music had its peak in the ‘80s, for very good reasons.

Together with this, bands also started to sing about their struggles in the music industry, and how difficult it was to get to fame.

Songs like “Welcome to the Jungle” written by Guns N’ Roses became a true hard rock anthem at the time.

The blazing guitars and hard-hitting beats show very clearly that fame can also have a dark side, as the lyrics tell us.

In music history, there are some decades that are relatively calm and little happens, while other times a whole new movement emerges.

We saw this in the ‘60s when music was an expression of political movement and lifestyle changes.

Although the ‘80s did not have the same political drive as two decades earlier, there were some very powerful changes in the music rock bands wrote at the time.

One of these changes was the rise of acoustic intros in the newly emerging power ballads and rock ballads.

They shaped a new meaning for the entire song and made them widely popular amongst the youth around the globe. However, hard-hitting notes from rock albums also topped the charts.

One of the reasons why rock music was able to reach a wider audience was not just its appearance on the radio, but also on music television channels, such as MTV, which became a huge hit.

These channels helped a range of already famous but also non-mainstream bands to get their music out to listeners.

Similar to musicians from the ‘60s and ‘70s, rock bands in the ‘80s also relied on promoting their music independently at concerts or other music gigs.

This is what made ‘80s music a large underground movement at first, and then lifted it into the spotlight.

Particularly songs like “Born in the U.S.A.” by Bruce Springsteen were so popular that they ended up number one on the charts.

Springsteen’s song talked about the difficult time in America then, which made it one of the most patriotic hymns in the ‘80s.

The 1970s saw a solid hard rock scene coming out of nowhere. This scene changed significantly in the ‘80s when guitar-driven hard rock merged with guitar solos and riffs.

This combination shaped the entire rock music scene of the decade, and it made some excellent guitar players, such as Aerosmith, very famous simply for their instrumental solos.

This focus on guitar music brought forward some interesting new guitar techniques, including tapping techniques which were widely used in a range of hard rock songs.

This musical development also influenced other genres, where guitar solos were combined with drum solos for live performances.

Live rock concerts were hugely popular in the ‘80s, and fans would wait sometimes days outside a concert hall just to get to the front of the queue.

One band that put on an impressive show for their live performance was the Swedish band Roxette.

Their songs “Joy Ride” and “The Look” appealed to the mainstream audience, and attracted a large following during the ‘80s and beyond.

Roxette was initially only popular in Europe, where “The Look” became a great hit in their native country, but after a couple of years, they also toured the US and the rest of the world.

Rock helped a number of different subgenres to emerge from the underground music scene.

Genres, such as thrash metal and speed metal, finally found an audience and these bands gathered a fan base in the 1980s.

This paved the way for a prominent scene of extreme music subgenres today.

Some of today’s rock bands found their inspiration in these speed or thrash metal bands from the ‘80s which shows that this decade was an essential experimental ground for new wave rock acts.

But also bands that produced soft rock ballads found their home in the 1980s. One of these bands was Duran Duran, who rose to such fame that several of their songs ended up on the US Billboard Charts.

Another band that is best known for one of their songs but has produced almost an entire genre for themselves is Pink Floyd.

Their impressive live performances made use of light, different sounds, and vocals in a way that had never been heard before.

The 1980s paved the way for some of the most influential rock bands of all time. Although rock emerged mostly from the underground music scene, this glamorous decade helped smaller bands to rise to great fame.

This is not just thanks to the many live concerts and performances across the globe, but also the rise of music TV channels, the mixtape, and the Walkman.

These technological advancements contributed to the great success of rock bands at the time.

And although the ‘80s are now long gone, we still find ourselves drawn in by the thrilling guitar beats and dramatic vocals.

What are your thoughts on these 1980s rock songs? Do you have a favorite that we didn’t mention? Let us know in the comments below!