You are here: Home1 / Popular Wedding Songs By Year

Celebration of Wedding Songs Through History

Our Wedding Songs by Year List is a collection of popular wedding songs, world events, celebrity weddings, pop culture, and more. Anniversary parties playlists have never been easier to create.

One of the most common questions we get is this:

What songs were popular the year my parents were married?

Depending upon the age, we also are asked which songs were popular when their grandparents were married. In order to create a good playlist for anniversary parties or to remember popular songs the year you were married, we assembled popular wedding songs by year.

Why Popular Wedding Songs By Year?

It’s nice to be able to look back at your own wedding year to see what was popular during that time from a nostalgia standpoint. But also, this is helpful for birthdays and to create anniversary playlists. Would you like to know which wedding songs were popular the year you were born? That’s rather fun, too.

There are many ways to search for the perfect wedding song. Exploring songs by year is an effective way to locate the tunes that form the soundtrack of your life. Perhaps you and your partner grew up listening to songs from the same era. The best wedding songs strike a nostalgic chord that reminds wedding couples of the shared experiences of their youth.

We’ve provided wedding songs by year so that your search is simplified. In our lists, you can expect to find a broad representation of musical genres and styles. These collections will offer choices for both your wedding ceremony and reception.

Wedding Songs The Year You Married

Wedding Songs By Year — The Process

These lists are curated by analyzing the most popular wedding song choices from a given year. The top songs from various industry charts are taken into consideration. You will find rock ballads, soul classics, country hits, and religious music in each year’s collection.

We put ourselves into your shoes when we selected popular wedding songs by year. There are a few qualifications that help to set certain songs apart. The perfect wedding song should have meaningful lyrics that you and your spouse can relate to. You also want song choices that will enhance the emotions of the day — not talk about affairs and breakups. It’s a practical consideration.

Many of the songs on our Popular Wedding Songs by Year are slow in tempo, making them suitable for everything from a wedding processional to an interlude that follows a celebratory toast. You might even find the occasional instrumental among these best wedding songs.

Songs that have a more lively tempo are meant to be suggested to your wedding DJ or live band for your reception or anniversary party. You will want some upbeat music that inspires all of your guests to join in the dancing on your special day.

How Do I Find the Best Wedding Song By Year?

When searching for songs by year, it is always a good idea to broaden your search. Rather than just viewing the year you are interested in, look at the years before and after. The release date of a wedding song may have placed it on a yearly list that you overlooked.

This method of wedding song selection is especially helpful if you are using a specific theme for your event. For example, if you want to have a 1980s-themed wedding, then you will want to begin by searching for years from 1980-1989.

Our wish is to help you take the stress out of choosing wedding music. Take your time browsing each list of songs by year. Remember to have fun. These are the happiest days of your life, so let your song choices reflect that.

Each year not only showcases popular wedding songs, but we also feature: 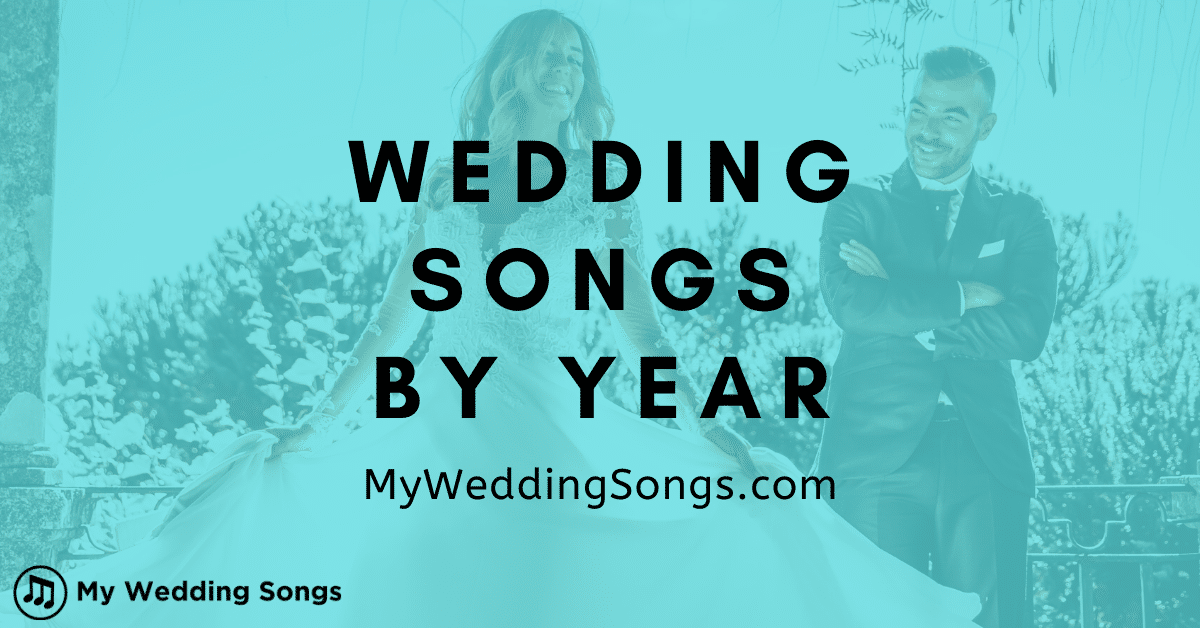