Skip to content
Home > Dance Style Songs > 10 Ballroom Dance Songs For Weddings You Would Not Think Of
My Wedding Songs is a reader-supported website. As an Amazon Associate, we earn revenue from qualifying purchases. Purchases made through links on this page may earn us a commission but also support the artists.

Ballroom-styled dances at weddings never fail to impress, going beyond what’s normal for a wedding reception and creating a fun, energetic atmosphere. There are plenty of styles of ballroom dances to match the personality and mood you’re going for.

In this article, we’re going to be breaking down the top 10 ballroom dance songs for a wedding and pair them with a dance style to match. 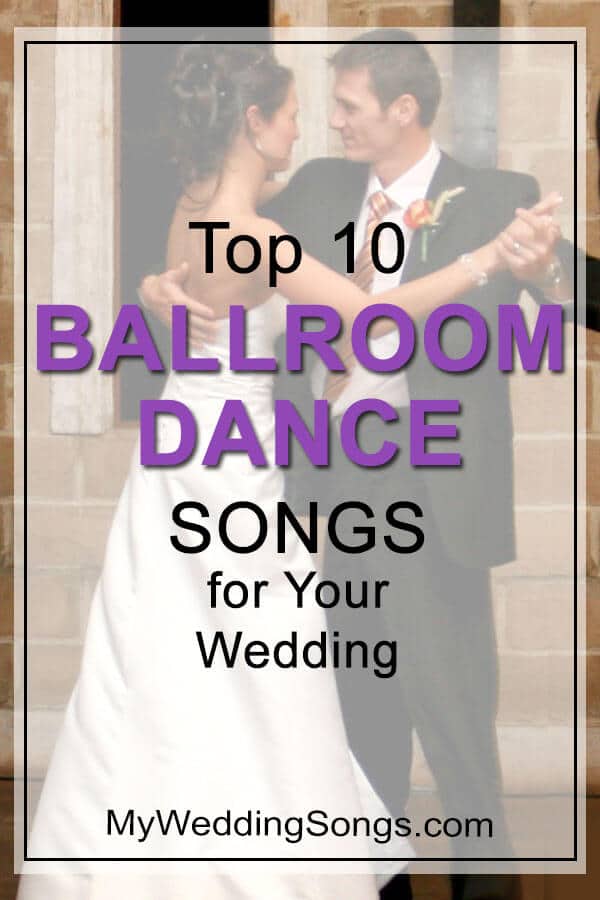 Hip Hop is all about the fast moves and smooth footwork, and the beat of this song will provide many opportunities to show off the latest moves.

Shut Up and Dance – WALK THE MOON
Ballroom Dance: Jive
Released in 2014 on album Talking Is Hard

The Jive dance originated from Swing dancing and is full of fast-paced action. Shut Up and Dance is a perfect fit for the Jive because of the fast tempo and speed.

The Quickstep is an energetic dance where dancers seem to be light on their feet, and Party Rock Anthem is a song full of energy and liveliness.

Dancing to the Cha Cha is about dancing in synchronization and parallel to your partner, and the dance is also known as a flirtatious dance. What better flirtatious song to dance to than Low by Flo Rida?

One of the most romantic dances, the Viennese Waltz will be a crowd-pleaser when danced to Thinking Out Loud. This would be a beautiful dance and song for a couple’s first dance.

The Foxtrot is a dance for its smooth, continuous moves and can be danced at a fast or slow speed. Sweet Caroline is ideal for the Foxtrot because the tempo changes throughout the song which would be perfect to speed up and slow down the Foxtrot.

Popular among the younger crowd, Hip Hop is the type of dance designed to get everyone out on the dance floor. Watch Me already has a few dance moves associated with it, but you can also take your own spin on it and add a few of your own.

All of Me – John Legend
Ballroom Dance: Tango
Released in 2013 on album Love in the Future

The Tango is a romantic dance focused on underlying deep connection with one another and All of Me is perfect for the Tango because of the profound romantic feelings.

If you are dancing to Hotline Bling, you should be doing the Salsa. Salsa is a fast-paced dance full of intricate moves and turns.

Just the Way You Are – Bruno Mars
Ballroom Dance: Rumba
Released in 2010 on album Doo-Wops & Hooligans

Dancing the Rumba will bring a romantic feel to the dance floor; it is a romantic dance with swift moves including hip rolls that fit in flawlessly with Just the Way You Are.

Do you have a favorite ballroom dance song? Please comment on the song and dance below.

See all of our ballroom dance song lists!

Valerie Cox is a contributing writer for Dancewell Ballroom. Dancewell is located in Portland, OR.