Skip to content
Home > Dance Style Songs > 15 Top Modern Waltz Songs To Dance At Your Wedding
My Wedding Songs is a reader-supported website. As an Amazon Associate, we earn revenue from qualifying purchases. Purchases made through links on this page may earn us a commission but also support the artists.

Waltz songs are incorporated into many of today’s weddings. 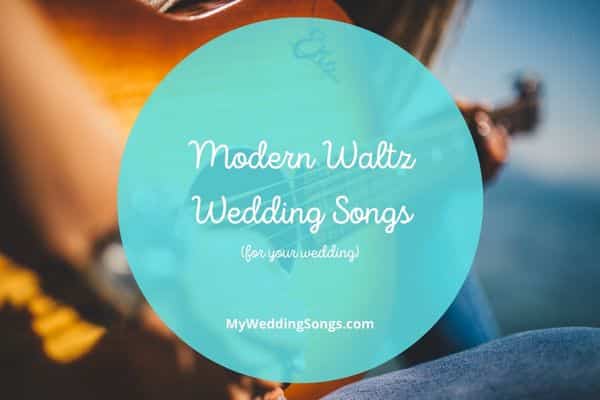 A typical song is about 3-4 minutes in length. Therefore, plan for a minimum of 12 hours of practice to perfect your dance. If you choose to make your first dance a waltz, contact your local dance studio and they will help with a choreographed routine.

If you are the bride and groom dancing the waltz for your first dance, be sure to practice with the bride wearing her wedding dress (even if it is in private without the groom). This way you can test the length of the dress and the weight so all the turns can be performed as expected.

If you would like to see a waltz danced, view past shows of Dancing With The Stars and So You Think You Can Dance. Some of the songs listed below were danced to in past episodes. For your convenience, we also listed the music genre and release date of each song.

If you select your wedding reception’s first dance like a waltz, it is also commonly known as the Bridal Waltz.

Please keep song tempo in mind when selecting your song. Listen to the song and picture your steps to the beat of the music. A slower tempo is recommended for those not too sure on your dance feet.

I remember the night and the Tennessee Waltz
Now I know just how much I have lost
Yes, I lost my little darling on the night they were playing

I’ve Made Up My Mind to Give Myself to You – Bob Dylan
Released in 2020 on the album Rough and Rowdy Ways, Genre: Folk

No one ever told me, it’s just something I knew
I’ve made up my mind to give myself to you

If you love to waltz, also see our list of Country Waltz songs.

Waltz in the Dark – Matt Nakoa
Released in 2019 on the album Casting Shadows, Genre: Pop

Heart Like A Wheel – Eric Church
Released in 2018 on the album Desperate Man, Genre: Country

You Are The Reason – Calum Scott
Released in 2017 on the album Only Human, Genre: Pop

If you are going to a cowboy bar, practice up on your Cowboy Cha Cha dance songs too!

When I saw you in that dress, looking so beautiful
I don’t deserve this, darling, you look perfect tonight

From The Ground Up – Dan + Shay
Released in 2016 on the album Obsessed, Genre: Country

How Long Will I Love You – Ellie Goulding
Released in 2013 on the album Halcyon Days, Genre: Pop

I Won’t Give Up – Jason Mraz
Released in 2012 on the album Love Is a Four Letter Word, Genre: Pop

The Only Exception – Paramore
Released in 2010 on the album Brand New Eyes, Genre: Indie

And that was the day that I promised
I’d never sing of love if it does not exist
But, darling
You are the only exception

Any couple can move throughout the dance floor with our list of Country two-step dance songs.

You and Me – Lifehouse
Released in 2005 on the album Lifehouse, Genre: Rock

Come Away With Me – Norah Jones
Released in 2001 on the album Come Away with Me, Genre: Jazz

Iris – Goo Goo Dolls
Released in 1998 on the album Dizzy Up the Girl, Genre: Rock

I’ll Be – Edwin McCain
Released in 1997 on the album Misguided Roses, Genre: Rock

Baby, I compare you to a kiss from a rose on the grey
Ooh, the more I get of you, the stranger it feels

Fade Into You – Mazzy Star
Released in 1993 on the album So Tonight That I Might See, Genre: Alternative/Indie

Other Slow Waltz Songs To Check Out

What is the Waltz?

The waltz is primarily danced in the closed position. It is believed to have started in the 16th century.

Do you have a favorite waltz song, not on our list? Please share it below so that we can add it!