It’s no secret that rock music has changed over the years, from the beachy anthems of the 60s to the glam movement of the 80s. But how much did the music genre change in the 90s?

During this decade, rock music would change several times, with the movement becoming associated with rebellious fans and alternative fashions. In fact, the 90s saw various rock evolutions, such as punk, heavy metal, indie rock, and so much more. But what songs were the best and which ones have stood the test of time?

In the article below, we have compiled a list of the 100 most iconic rock songs of the 90s, which cover a diverse selection of genres and bands. 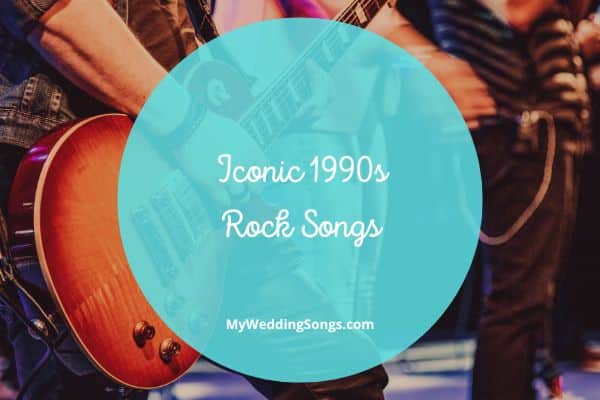 To start, we have compiled a list of the 10 best 90s rock songs, which are now considered to be pillars of both the decade and the rock genre:

How Did Rock Music Change In The 90s?

Once the early 90s cemented a modern rock movement, several subgenres started to hit the shelves, with punk, nu-metal, and ska being some of the most successful. It was during this time that music lovers also saw the rise of the grunge movement, which was characterized by its raw and harsh expression.

Following this, alternative rock became a global phenomenon and it became clear that the 90s would forever be defined by these new musical movements.

What Was The Alternative & Grunge Movement?

As we mentioned before, alternative rock soon became a global phenomenon, one that had a massive impact on the music industry. This is because the alternative scene opened the door for other diverse forms of music that have since become mainstream components of the modern rock sound.

Because of this, various musical elements were soon combined to create a unique subgenre called grunge, which borrowed heavily from alternative and hard rock. Nowadays, this raw movement is associated with the 90s music scene, as well as the decade’s media and fashion sense.

What Happened To Heavy Metal Music In The 1990s?

During the 90s, audiences also saw a rise in musicians who wanted to reinvent the heavy metal genre, which resulted in the formation of several movements. At the same time, more and more performers were experimenting with sounds that started to transform the identity of rock and roll. This led to the success of thrash metal and speed metal, which als become notable components of 90s rock.

While most alternative rock bands found their footing in the indie scene, others were able to cement respectable careers with commercial labels, which allowed them to release their new version of heavy metal music.

Because of this, the 90s is now associated with the rise of these subgenres, as their role and influence can be seen across the decade’s culture.

What Other Rock Music Originated In The 1990s?

With the sudden success of grunge music, genres such as hair metal became more obscure and hard to find. However, there were certain movements that were able to benefit from this sudden change, with glam rock bands becoming more popular in the early 90s due to their timeless rock ballads.

Because of this, a notable number of hard rock bands were also able to release new albums during this time, with some even maintaining their success through the constant reinvention of their sound and aesthetic.

It was through this that acoustic rock songs found their way into the mainstream, with new bands and artists combining alternative and soft rock to create a new and exciting sound. In fact, countless acoustic rock songs became synonymous with 90s teenagers, as they used poetic lyrics and welcoming melodies to discuss themes of identity, adolescence, emotion, and rebellion.

These songs soon became anthems for the next generation, which also resulted in new musical explorations and allowed new subcultures to emerge. With this audiences saw the rise of performers such as Alice in Chains and Nirvana.

How Did Rock Music Influence The 1990s?

The 90s is often described as the decade that didn’t fit, as some believe that the period has little to show for itself when compared to the subcultures and historical events of the 70s and 80s. However, the 90s definitely left its mark when it comes to music, whether that be rock or other successful genres.

During this decade, boy bands and girls bands were on the rise, which means more and more commercial albums were being released, with the Spice Girls becoming the most successful group at that time. Because of this, there wasn’t much for rock enthusiasts to consume, until the rise of alternative rock opened the door for new subgenres to enter the market.

This led to the establishment of the grunge movement, as well as the rise of alternative rock, alternative metal, and acoustic rock. Components of these genres are still used in music today, which is another reason why 90s rock is so important to the history of the genre and its evolving landscapes.

Now, let’s take a look at the rest of the songs we have chosen for our list of the most iconic 90s rock songs.

And there you have it, those were the 100 most iconic rock songs of the 90s. We hope that you found this list helpful and that you agree with our choices. To learn more about 90s rock songs, we have included some other titles down below.