Skip to content
Home > Offbeat > Academy Awards (Oscar) Winning Songs Full List For Movie Goers
My Wedding Songs is a reader-supported website. As an Amazon Associate, we earn revenue from qualifying purchases. Purchases made through links on this page may earn us a commission but also support the artists. 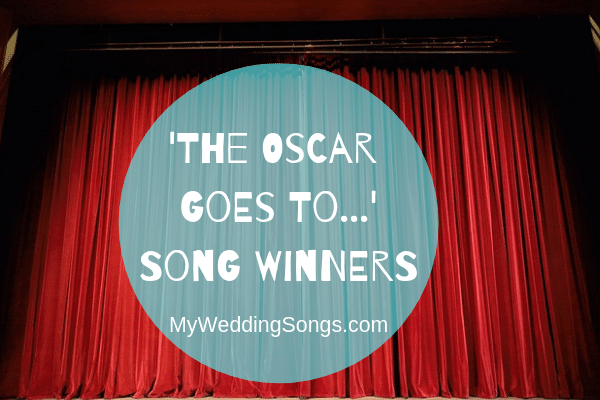 Please note that the said years below are the years the movies were released and the actual awards ceremonies that happened in the year following.

2018 Shallow – Lady Gaga feat. Bradley Cooper
From the film A Star Is Born

2017 Remember Me – Miguel
From the film Coco

If you want to incorporate songs from movies into your wedding, see our list of wedding songs from the Twilight Saga.

2012 Skyfall – Adele
From the film Skyfall

2011 Man or Muppet – Bret McKenzie
From the film The Muppets

Having songs from movies for walking down the aisle is very common. See our list of Harry Potter wedding songs.

2008 Jai Ho – A. R. Rahman
From the film Slumdog Millionaire

2003 Into the West – Fran Walsh, Howard Shore, and Annie Lennox
From the film The Lord of the Rings: The Return of the King

2002 Lose Yourself – Eminem, Jeff Bass, and Luis Resto
From the film 8 Mile

Next: Read 8 Wedding Processionals from the Movies

2000 Things Have Changed – Bob Dylan
From the film Wonder Boys

1995 Colors of the Wind – Alan Menken
From the film Pocahontas

Many of the artists listed are superstars and performed at Super Bowl halftime shows.

1990 Sooner or Later – Madonna
From the film Dick Tracy

Do you also notice any similarities in the list? I noticed how many movies are animated! WOW. Animated movie examples from above include The Lion King, Pocahontas, Tarzan, Monsters, Inc., Toy Story 3, and Frozen. That’s 6 out of 20.