Skip to content
Home > Wedding Songs by Year > Top 1995 Wedding Songs For A Love So Beautiful
My Wedding Songs is a reader-supported website. As an Amazon Associate, we earn revenue from qualifying purchases. Purchases made through links on this page may earn us a commission but also support the artists.

1995 was filled with sentimental love ballads by Bruce Springsteen, Tracy Chapman, Michael Jackson, and many other legends of music. Here is a list of 1995 wedding songs that will help make your day memorable. 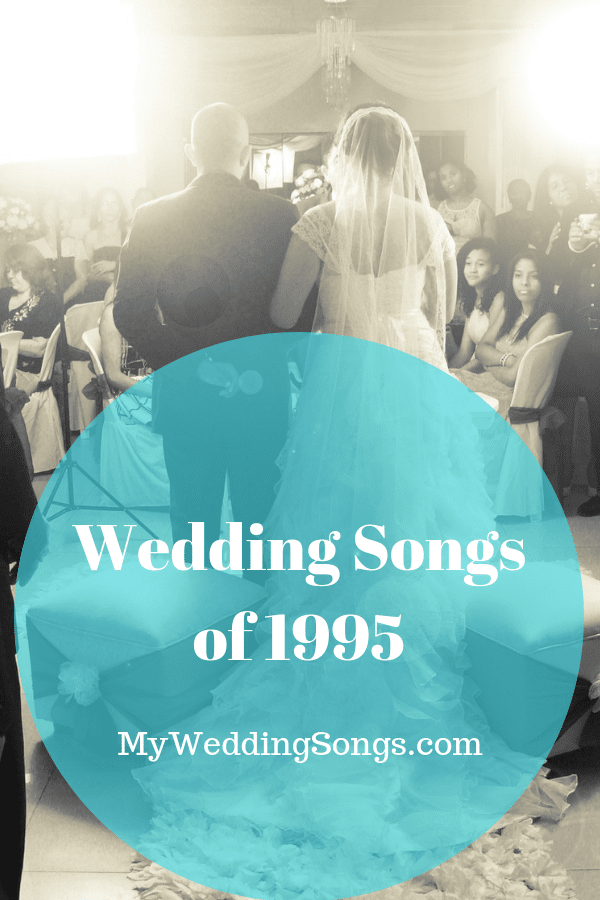 All-4-One covered a second John Michael Montgomery hit with this soulful ballad that features rich harmonies and powerful lyrics. It is often used in weddings today as the bridal party makes its entrance into the chapel, just before the bride is walked down the aisle.

A love so beautiful
A love for you and me

Michael Bolton is just one reason that this song became a huge hit in 1995. It was co-written by superstars Jeff Lynne and Roy Orbison, and it serves up an emotional feast that hits all the right notes for a wedding song selection.

Peter Cetera and Crystal Bernard blended their voices on this 1995 love ballad that captures the essence of a single romantic moment. It is most often used in wedding ceremonies during the reception, and it can also be played as the new bride and groom are introduced for the first time.

When You Love Someone – James Ingram and Anita Baker
1995, Forget Paris

Two of the most iconic R&B voices of the 90s teamed up for this song from the film Forget Paris. James Ingram and Anita Baker have just the right vibe here, and you can easily add this to the songs a DJ will play at your wedding reception.

You Are Not Alone – Michael Jackson
August 1995, HIStory: Past, Present, and Future, Book I

The King of Pop Michael Jackson sang to perfection on this song, a tune that many couples choose to include in their wedding day playlist. It conveys a sense of protective love and commitment to values like fidelity which are important to couples taking their wedding vows.

Every wedding needs some fun music for the reception, and Shania Twain’s hit from 1995 playfully lets a groom know what his bride expects from their relationship. This song has been chosen by brides to accompany the traditional tossing of the bouquet.

Country superstar Garth Brooks topped the charts once again with this classic hit. It is a song that grooms like to dedicate to their bride on their wedding day, and many have even sung it to a backing track as the bride looks on.

Strong relationships are wrapped up in feelings of safety, and that is exactly what this song by Martina McBride expresses. It is filled with romantic imagery that makes the song suitable for many portions of the wedding festivities.

This joint effort by Mariah Carey and Boyz II Men is everything a couple could ask for in a wedding song. It reflects all of the longing and feelings of true love that have led you to the altar with your partner.

Can’t Get You Off My Mind – Lenny Kravitz
September 1995, Circus

When it is time to celebrate on the dance floor after the wedding vows have been spoken, this song from Lenny Kravitz is a perfect choice to get the party started. It has simple lyrics that everyone can sing along to, and the message from the groom to his beautiful bride is made clear.

See a list from the prior year with the popular 1994 wedding songs.

But so far, all I have are dreams of you
So I wait for the day, and the courage to say
How much I love you

Tejano superstar Selena’s life was cut short just as she was achieving mainstream success with hits like this one from 1995. Brides love poignant lyrics, and they can be played at your wedding as the guests are seated.

Gather at the River – Point of Grace
March 1995, The Whole Truth

Many couples prefer to have songs of faith played at their wedding, and this one from Point of Grace has a modern feel that couples love. It is a song that combines faith in God with faith in one’s chosen partner.

Bryan Adams continued his run of success with this love ballad that will put tears in the eyes of your wedding guests. It has powerful lyrics that define love in a way that is most appropriate for a wedding interlude, and it is also a good addition to the reception playlist.

Freddie Mercury may have been the best vocalist of his era, and this song from Queen features Freddie at his best. It is a popular choice for weddings today given the release of the film Bohemian Rhapsody in 2018.

This hit from Bruce Springsteen was nominated for an Oscar for its use in Jerry Maguire, and it paints an emotional portrait of how it feels to truly love a woman. Many brides have chosen the song for their grand entrance, and it is also used for the first dance between husband and wife.

Oh, I’ve longed for you
And I have desired
To see your face, your smile
To be with you wherever you are

Tracy Chapman’s 1995 album New Beginnings represents some of the songwriter’s best work, and “The Promise” is often chosen for wedding ceremonies. It has been used as a non-traditional recessional, and many couples like to light their unity candles with this song playing in the background.

This was just one of the hit singles from Jagged Little Pill, the breakthrough album for Alanis Morrisette. It has a quirky, grunge feel that is best saved for the reception playlist, but many brides love it because it relates to their independent spirit.

Singer-songwriter Sophie B. Hawkins is largely known for this song from 1995, a beautiful declaration of one partner’s love for another. It has been used as an alternative wedding processional, and it can also be played as the wedding party leaves the venue.

“Flood” is the song that made the group Jars of Clay contemporary Christian superstars. This is an emotional song that is chosen by many religious couples because it honors God in a way that is compatible with the devout nature of a wedding ceremony.

Firehouse proved that there was still room for the power ballad when it released this song in 1995. It has sweeping guitar riffs that defined power ballads from hair bands, and it can be used to bring a splash of nostalgia to your wedding day.

This song from Terrance Trent D’Arby was a hit in the UK, and many couples there and in other parts of the world appreciate the song’s beautiful lyrics. It may be just the song that you are looking for if you want your wedding day choices to be non-traditional.

Modern brides love the songs of the Backstreet Boys, and this was one of their best since 1995. It’s a song that you and your partner will want to dance to, but it has also been used creatively in weddings where couples want to shy away from the norm.

Celebrating weddings in 1995. Where were you and what was happening?

Congratulations on your wedding of 1995. You share your anniversary with the following events.

Learn more about 1995 on Wikipedia. Thank you for visiting our page – wedding songs of 1995.

Have a favorite wedding song from 1995? Please share the song below in the comments.