Skip to content
Home > Wedding Songs by Year > Top Wedding Songs of 2013 for Couples Drunk In Love
My Wedding Songs is a reader-supported website. As an Amazon Associate, we earn revenue from qualifying purchases. Purchases made through links on this page may earn us a commission but also support the artists.

You can use the songs on this list to create a wedding day that your spouse and guests will never forget. 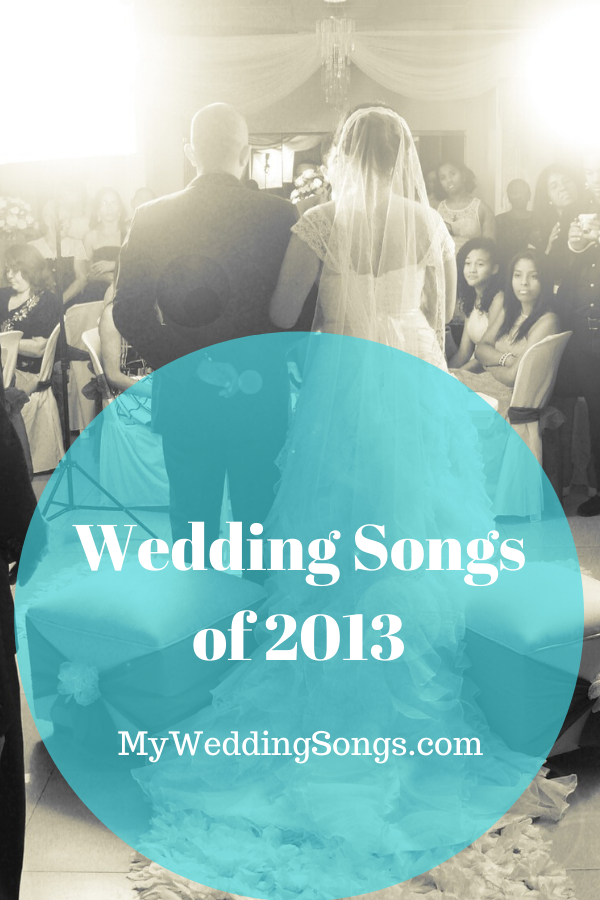 Blurred Lines – Robin Thicke featuring T.I. and Pharrell Williams
March 2013, Blurred Lines
Robin Thicke stirred up a little bit of controversy with this song featuring T.I. and Pharrell Williams when Thicke performed a racy live version with Miley Cyrus. You don’t have to make it as hot as they did for your wedding, but the song should definitely be included on the dance music playlist.

Can’t Hold Us – Macklemore & Ryan Lewis featuring Ray Dalton
August 2011 carryover as “The Most-Streamed Song of 2013” by Spotify, The Heist
This song from Macklemore & Ryan Lewis featuring Ray Dalton sums up the optimism and confidence that all newlyweds should have as they tie the knot. It can be used for getting the party started, or it can also be played while introducing the wedding party at the reception.

All Of Me – John Legend
August 2013, Love in the Future
John Legend wrote and recorded what might be the best wedding song of the decade, a soft piano ballad that is appreciated for its beautiful lyrics. Written for Legend’s own wife, the song has been used in many weddings as a first dance for the newlyweds.

Ho Hey – The Lumineers
June 2012 carryover, The Lumineers
The catchy hook from this wedding song by The Lumineers is what made the tune a hit, and your guests will be singing along when the song is played at your wedding celebration. Some couples like to make it the first song was chosen for the reception while others prefer to save it for the send-off at the end of the evening.

Get Lucky – Daft Punk featuring Pharrell Williams
April 2013, Random Access Memories
Every wedding reception needs some music that is a little on the suggestive side, and this song from Daft Punk featuring Pharrell Williams is fun and a tad naughty. Wedding guests will enjoy seeing the bride and groom light up the dance floor with their best dance moves as this song is played for the garter toss.

Suit & Tie – Justin Timberlake feat. JAY Z
January 2013, The 20/20 Experience
When you combine the talents of Justin Timberlake and Jay Z you are certain to get a big hit like this one, an energetic dance number that reflects the desire of everyone to look and feel good on your wedding day. Has the song played soon after the celebratory toasts are made by the wedding party? Suit & Tie is also a classic song to play as the groomsmen are introduced.

Treasure – Bruno Mars
May 2013, Unorthodox Jukebox
Bruno Mars reminds all of us that finding true love is better than discovering a hidden treasure, and you can draw on that theme to add meaning to your wedding music selections. Some couples like to make this a song that they alone can share on the dance floor.

Honey, you’re my golden star
You know you can make my wish come true
If you let me treasure you

But time is money, only difference is I own it
Now let’s stop time and enjoy this moment

Same Love – Macklemore & Ryan Lewis featuring Mary Lambert
July 2012 carryover, The Heist
Another song from Macklemore & Ryan Lewis can be found on our list of best 2013 wedding songs, and this one features Mary Lambert. The combination of emotional lyrics and a modern beat is likely to keep this song popular at wedding receptions for many years. The song makes for a special song to play at same-sex weddings.

Girl On Fire – Alicia Keys
November 2012 carryover, Girl on Fire
This song became a career-defining hit for Alicia Keys, a moving celebration of womanhood that features the help of Nicki Minaj. Many brides choose to play this song for a bouquet toss song, but it can also be used to introduce the bride to her wedding reception guests.
The Old Crow Medicine Show recorded the original of this country hit but it was Darius Rucker that made it a smash in 2013. Couples should add the song from the Hootie & The Blowfish frontman to their wedding reception playlist, if they prefer country dance songs.

Drunk In Love – Beyoncé
December 2013, Beyoncé
Beyonce scores two hits on this list of 2013 wedding songs, and on this one Bey shares the spotlight with husband Jay Z to deliver a pleasing dance groove with catchy lyrics. Use this song in the middle of the reception to bring the mood back up again after everyone has had time to mellow out.

Celebrating weddings of 2013. Where were you and what was happening?

Congratulations on your wedding of 2013. You share your anniversary with the following events.

Learn more about 2013 on Wikipedia. Thank you for visiting our page – weddings of 2013.