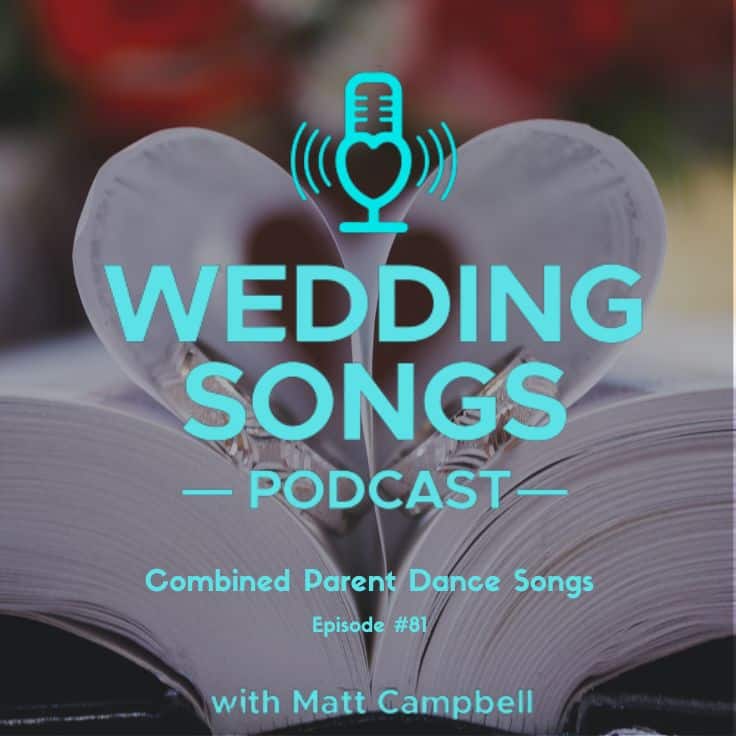 Matt talks about his favorite songs to play for a combined father-daughter and mother-son dance for your wedding reception playlist.  Hear some song lyrics that go with the picks too!

Welcome to episode number 81 of the Wedding Songs Podcast. I am Matt Campbell and today I am going to be talking about songs you can play for a combined parent-child dance. Now, this could be the father-daughter / mother-son dance combined into one song. You may not want to have a lovey-dovey song that is particular to a father-daughter or for a mother-son. This is more generic and could be played for either dance. If you prefer to read the list, or listen to the list you can do so on our website MyWeddingSongs.com. Just search for combined dances. We will also have a link in our show notes as well. While you are on the website, make sure you sign up for our monthly newsletter, The Music Letter. We send it out on the last day of the month and it features all of the wedding songs of the prior month, also some hidden gems, and some songs you can play on date night as well. Make sure you check that out.

I am not going to go thru every song on the list but I am going to go thru these in chronological order starting with the newest song first. Let’s go ahead and get started with the first song titled “On Me” by Thomas Rhett, Kane Brown, and Ava Max. This was featured in the Scooby Doo soundtrack of 2020. It is really a great song that describes a relationship where you can rely on another person, particularly a parent. If you have never heard this song, the lyrics include…And if you want to, tell me what you gon’ do, You could put it all, put it all on me, You can count on me, one, two, three. One of the most popular parent-child dance songs at weddings is “Forever Young”. A lot of artists have covered this and if you are a Folk fan, in 2019 Andrea von Kampen released this song. It is a great Folk song with the lyrics…Forever young, I want to be forever young. Next up, in 2018, Luke Bryan released “Most People Are Good” with the lyrics…I believe this world ain’t half as bad as it looks, I believe most people are good.

Another more generic song is “Humble And Kind” by Tim McGraw in 2016, with the lyrics…When the work you put in is realized, Let yourself feel the pride but, Always stay humble and kind. In 2007 the lead singer of Matchbox 20, Rob Thomas, released “Little Wonders” for the Meet the Robinson’s soundtrack. Lyrics include…Our lives are made, In these small hours, These little wonders. Also released in 2007 is a collaboration with Jim Brickman featuring Lady A on the song “Never Alone”. Lyrics include…So when hard times have found you and your fears surround you, Wrap my love around you, you’re never alone. Another very popular parent-child dance song at weddings is “My Wish” by Rascal Flatts with the lyrics…My wish, for you, is that this life becomes all that you want it to, Your dreams stay big, your worries stay small. If you are looking for a Christian song then in 2005 Mark Harris released “Find Your Wings” with the lyrics…I pray that God would fill your heart with dreams, And that faith gives you the courage, To dare to do great things.

In 2003 Josh Groban released “You Raise Me Up” as a popular selection. In 2000 Lee Ann Womack released “I Hope You Dance” with the lyrics…Promise me that you’ll give faith a fighting chance, And when you get the choice to sit it out or dance, I hope you dance. Of course “Sweet Child O’Mine” by Guns & Roses is a popular father-daughter dance song, but this was also covered by Sheryl Crow in 1999. This version would make for a great selection as a combined parent-child dance song. From the movie Tarzan, Phil Collins has his song “You’ll Be In My Heart”. Released in 1999 lyrics include…No matter what they say, You’ll be here in my heart, Always. In 1995 Elton John released “Blessed” with the lyrics…And you, you’ll be blessed, You’ll have the best, I promise you that.

Just for Rock fans, in 1994 The Pretenders released “I’ll Stand By You”. Lyrics include…I’ll stand by you, won’t let nobody hurt you, I’ll stand by you, baby even to your darkest hour. For Pop fans, in 1993 is “Hero” by Mariah Carey. If you are looking for a duet, then the father-daughter duet Nat King Cole and Natalie Cole have their song that was reimagined in 1991 called “Unforgettable”. Lyrics include…It’s incredible, That someone so unforgettable, Thinks that I am, Unforgettable. IZ released “Somewhere Over The Rainbow” in 1990. It doesn’t have to be a beach wedding but this just has great vibes. You can have this song for your father-daughter, mother-son combined dance. That is a sample of what I have in the Modern era.

Starting off with the Classics, in 1988 Rod Stewart released “Forever Young”. For R&B fans, “Greatest Love Of All” by Whitney Houston is a great slow dance selection. For Pop fans from 1986 is Cyndi Laupers’ “True Colors” with the lyrics…I see your true colors, And that’s why I love you, So don’t be afraid to let them show. You don’t have to be a Reggae fan to enjoy this next song, “Three Little Birds” by Bob Marley. Lyrics include…Singin’ don’t worry about a thing, worry about a thing, oh, Every little thing gonna be alright, don’t worry. You know, weddings are all about sharing your love and your new marriage together. In 1977, one of my favorites, “Lovely Day” by Bill Withers with the lyrics…Just one look at you, And I know it’s gonna be, A lovely day. Another more generic song James Taylor released “Shower The People” in 1976 with the lyrics…I say (show them the way that you feel), They say in every life (shower the people you love with love). In 1972 Stevie Wonder released “You Are The Sunshine Of My Life” with the lyrics…You are the sunshine of my life, That’s why I’ll always stay around.

Another great song is “I’ll Be There” by Jackson 5 in 1970. If you are looking for a Classic Rock song then “Teach Your Children” by Crosby, Stills, Nash & Young in 1970. Lyrics include…So just look at them and sigh, And know they love you. With a Jazz feel, in 1967 “What A Wonderful World” by Louis Armstrong. There are a lot of great covers to this song as well that you can check out including Kina Grannis and Sophie Tucker. In 1965 The Beatles released “In My Life”. The song “Stand By Me” by Ben E. King in 1961 is always a popular wedding song selection. Lyrics include…I won’t cry, I won’t cry, No, I won’t shed a tear, Just as long as you stand, stand by me. Another more generic song is “Smile” by Nat King Cole in 1954 with the lyrics…Smile, what’s the use of crying, You’ll find that life is still worthwhile If you just smile.

So there you have it, a few combined father-daughter mother-song dance songs for your wedding. If you prefer to read the list or listen to the list you can do so on our website MyWeddingSongs.com. We will also have a link in the podcast notes to take you right to the list. While you are on the site, make sure to subscribe to our monthly newsletter of great new wedding songs being released, and also some forgotten hits of yesteryear that you can include on your wedding day. In two weeks I am going to be covering songs you could play for the groom processional (as the groom walks down the aisle before the I Do’s). Thanks for listening and have a great day.