Skip to content
Home > Music Artists > 24 Best Rihanna Love Songs & Party Songs for Your Wedding
My Wedding Songs is a reader-supported website. As an Amazon Associate, we earn revenue from qualifying purchases. Purchases made through links on this page may earn us a commission but also support the artists.

Known for her distinctive voice, bold fashion choices, and upbeat party anthems – there’s probably not a person in the modern world who hasn’t heard a Rihanna song. And while many know Rihanna for her pop and R&B tunes, she has quite a few love songs that are as catchy as they are heartfelt.

So if you’re looking for a Rihanna song to help set the mood, whether you’re getting ready for a night out or putting together a list of songs you can play on your wedding day, we’ve got you covered.

Here are some of our favorites Rihanna love songs and party songs that you can add to your wedding playlist!

Rihanna is a singer, actress, businesswoman, and overall international icon. Born in Barbados, she first launched her music career at 15 when she performed for music producers Evan Rogers and Carl Struken. This opened the door for her to sign a record contract with Def Jam and release her first album, Music of the Sun. From there, she went on to produce hits like “Umbrella”, “Work”, “Diamonds”, “We Found Love”, and more. 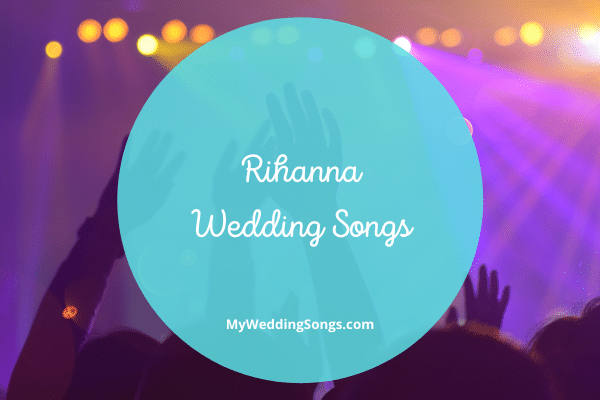 There’s no doubt that Rihanna has a knack for creating catchy hooks and melodies. And while her party anthems dominate the radio waves, she’s also released quite a few love songs over the years.

Rihanna has so many great love songs to choose from, it’s hard to narrow it down to just a few. However, these selected songs are some of her best and would make any couple’s wedding day playlist complete. Whether you’re looking for a classic ballad, a fun, and flirty song, or something unique, Rihanna has a love song for you. So turn up the volume and enjoy!

We Found Love is a song co-written and performed by Scottish DJ Calvin Harris. With its catchy beat and soulful lyrics, the song became an instant hit and the longest-running number-one single of 2011. It topped the charts in multiple countries and was nominated for multiple awards, especially recognized for its music video.

To borrow from Rihanna, it speaks about finding love in a hopeless place. The story takes us through a journey of falling in love despite the odds. While it’s not your typical “love song”, the catchy beat and message of resilience and hope make it a perfect addition to any wedding playlist.

If your love story is one that’s faced challenges and triumphed in the end, We Found Love is the perfect song to represent your journey. It’s a perfect wedding day anthem for couples who have overcome obstacles together and are ready to start their life together.

Diamonds
2012, Unapologetic
So shine bright, tonight you and I

Yet another gem of a song, Diamonds was written by Sia and produced by Benny Blanco and StarGate. It’s a mid-tempo pop ballad with elements of R&B that is sure to please any crowd. When it was released, the song topped the charts in over 20 countries and was nominated for several awards.

This song is a beautiful ode to the strength of love. It talks about the everlasting nature of love, and the ways it can shine even in the darkest of times. The lyrics are simple yet powerful, and the melody is both catchy and unforgettable.

It’s both passionate and hopelessly romantic – everything you could want in a love song. If you’re looking for a song that will stay with your guests long after your wedding day, Diamonds is a perfect choice. The tempo can be a bit of a challenge as it’s on the slower side, but you can always ask your DJ to mix it up a bit.

No matter what I do, I’m no good without you
And I can’t get enough
Must be love on the brain

This song is a doo-wop and soul ballad inspired by the songs of the 50s and the 60s. Co-written by Joseph Angel and Fred Ball, the song takes its cues from artists such as Prince and Al Green. The reception to the song was overwhelmingly positive, with the success breaking Rihanna’s tie with Elvis Presley for the artist with the 5th most top-five singles on the Billboard Hot 100 chart.

Although it was released more recently, Love On The Brain has a vintage feel that is reminiscent of classic love songs. The song has a bit of a slower tempo, but the melody is so beautiful that it’s worth the listen. Lyrically, the song is about being head-over-heels in love and the ways it can take over your life. However, critics have noted that the lyrics can also be interpreted as a tale of an abusive relationship, possibly inspired by Rihanna’s own experience with ex-boyfriend Chris Brown.

Whatever the lyrics may mean to you, Love On The Brain is a gorgeous love song that can be enjoyed by all. It’s the perfect choice for couples who are looking for a unique song that still captures the feeling of being madly in love.

You know how to love me hard
I won’t lie, I’m falling hard
Yep, I’m falling for ya but there’s nothin wrong with that

This song has a fun and flirty feel, making it a great choice for couples who want to inject some fun into their wedding playlist. The song was co-written by Ester Dean, Henry Walter, John Hill, and Lukasz Gottwald – a full team of hitmakers!

Considered a mid-tempo pop with reggae, dancehall, and dubstep influences, the song was a moderate commercial success. It peaked at number 14 on the Billboard Hot 100 and number one on US Dance Club Songs.

Make your bride feel special with this special dedication!

Baby, this is what you came for
Lightning strikes every time she moves
And everybody’s watchin’ her

It goes one by one, even two by two
Everybody on the floor, let me show you how we do
Let’s go, dip it low, then you bring it up slow
Wind it up one time, wind it back once more

When the sun shines, we’ll shine together
Told you I’ll be here forever
Said I’ll always be your friend
Took an oath, I’ma stick it out ’til the end

The world will keep turning if you use it, get out there and
Don’t stop, stop, the music
People keep dancing (don’t stop)

Watch out, you might just go under
Better think twice
Your train of thought will be altered
So if you must falter be wise

Do you have a favorite Rihanna love song? Please share your song below and why it is special to you.