Skip to content
Home > Music Artists > Top 7 Chris Brown Wedding Songs For Love & Dancing
My Wedding Songs is a reader-supported website. As an Amazon Associate, we earn revenue from qualifying purchases. Purchases made through links on this page may earn us a commission but also support the artists.

Given all of the planning that has to be done before a wedding, it’s easy to see why music often gets overlooked or dismissed.

After all, it’s a wedding, not a concert that guests are coming to.

And shouldn’t the music selected be a reflection of the happy couple’s personal tastes, anyway?

But weddings are in the end social events, and you don’t want your guests stampeding from the nave or the reception venue because of the music you’ve chosen.

You’re looking for a performer whose work speaks to your love and lifestyle. But one that Great Aunt Rose won’t object to. 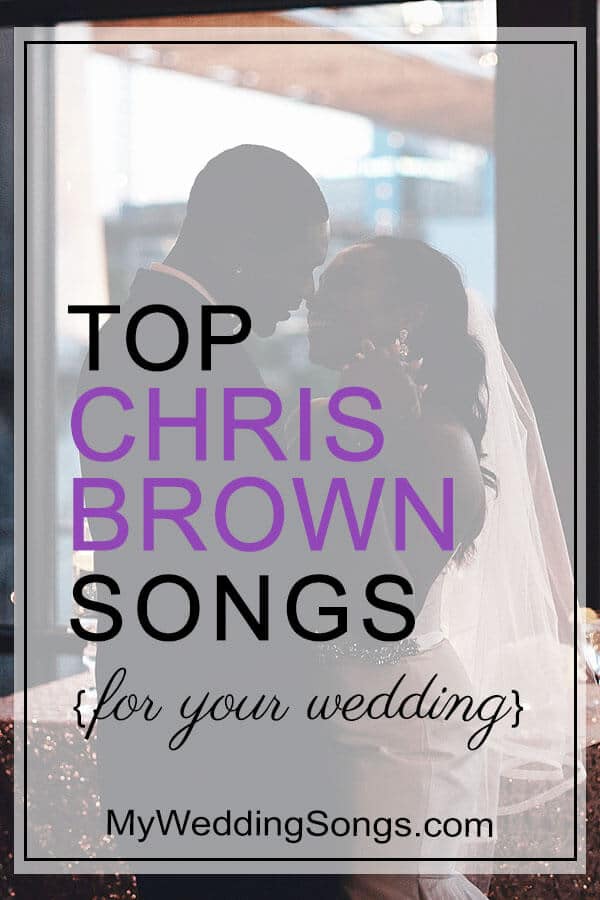 He may not be the first performer who comes to mind for these special days, but ever since a certain Midwestern bride and groom boogied down the aisle with him in the background a few years ago, Mr. Brown has become a more and more frequent wedding guest. And why not?

From soulful ballads to energized R&B that crowds can dance to, there’s a lot in Chris Brown’s repertoire to appeal to wedding guests.

Read on to learn how to best incorporate Brown’s music into your wedding.

The problem is, after being played at millions of weddings for hundreds of years, it can feel a bit mechanical.

Kevin Heinz and Jill Peterson broke with tradition at their 2009 St. Paul, Minnesota wedding by boogieing down the aisle to the alter to Brown’s Forever, with fleet-footed assists from the rest of their wedding party.

Were the guests startled? Yes!

Aside from revealing that the bride and groom, bridesmaids, and groomsmen were all better than fair dancers, it also showed that the couple had a humorous, playful side, two important assets for any marriage.

And it brought the couple’s guests to their feet and allowed them to participate in the wedding from the very beginning of the ceremony.

While the lyrics to Forever may not include the famous “Here comes the bride”, they do include lines like:

That certainly expresses the thoughts of an about to be husband!

But brides and grooms should understand that substituting Forever for the Wedding March does create an expectation in guests’ minds that they’ll be treated to Fred and Ginger, not the sight of nervous bridesmaids trying not to trip on their hems.

Can this song still be your processional theme even if you don’t have Kevin and Jill’s moves?

Given how often that wedding video has been imitated and parodied, guests certainly won’t mind a little goofiness, as long as they’re allowed to take part as well.

Ah, yes. The bride and groom’s “spotlight” turns around the dance floor, with all eyes on them.

If the couple is not using Forever for their wedding entrance, it’s a great first dance song as well, as the song’s “plot” deals with a couple in love on the dance floor.

But it’s certainly not the only Chris Brown song that the newly wedded couple can cling to each other with.

There are multiple choices on Brown’s aptly titled album Love Songs, which includes the song With You, with the lyrics:

‘Cause with every kiss and every hug, You make me fall in love

You’re not planning to elope, and while the wedding is the happy couple’s big day, your guests need to be entertained, too.

A good wedding reception dance mix has songs that allow for everything from couple cuddling to cutting loose to the Funky Chicken.

And once again, Chris Brown is a good choice to add to the playlist, since he offers everything from slow dance ballads to rock the house funk.

Wedding experts warn that not just any song will do for the often “general audiences” one finds at wedding receptions, and not every Chris Brown anthem is appropriate for this type of gathering.

With that in mind, some of the better Chris Brown wedding songs are:

Forever and With You are good for couples, especially couples of a certain age.

Songs You Can Move To

She Ain’t You is a classic rhythm and blues number, while Yeah 3x shakes things up a bit with a techno beat.

Think I better let her go
Can’t leave you alone
Every day that I’m with her, all I want is you

Turn Up The Music is a great dance song that was a huge hit for Brown internationally.

Stay away from the remix though, which features the singer Rihanna, which might introduce a little more controversy than your reception wants.

Brown’s career is now ending its first decade, meaning that there are plenty of other titles from this artist to choose from for a wedding playlist.

He offers songs for all wedding occasions, and couples will find that he fits right in at their big event.

Do you expect me, to live alone with just me?
‘Cause my world revolves around you
It’s so hard for me to breathe

If you have a favorite Chris Brown song you think we should add to the list, please comment on it below.