Skip to content
Home > Music Artists > Top 6 Usher Love Songs for Your Wedding and Avoid
My Wedding Songs is a reader-supported website. As an Amazon Associate, we earn revenue from qualifying purchases. Purchases made through links on this page may earn us a commission but also support the artists.

One of the best artists who started in the 90s and has continued on is Usher. He has provided party music and love songs for over 20 years. Most of Usher’s music would be great for a wedding, while some, not so much.

Here are 6 Usher love songs that are great for a wedding, and 3 you should skip. 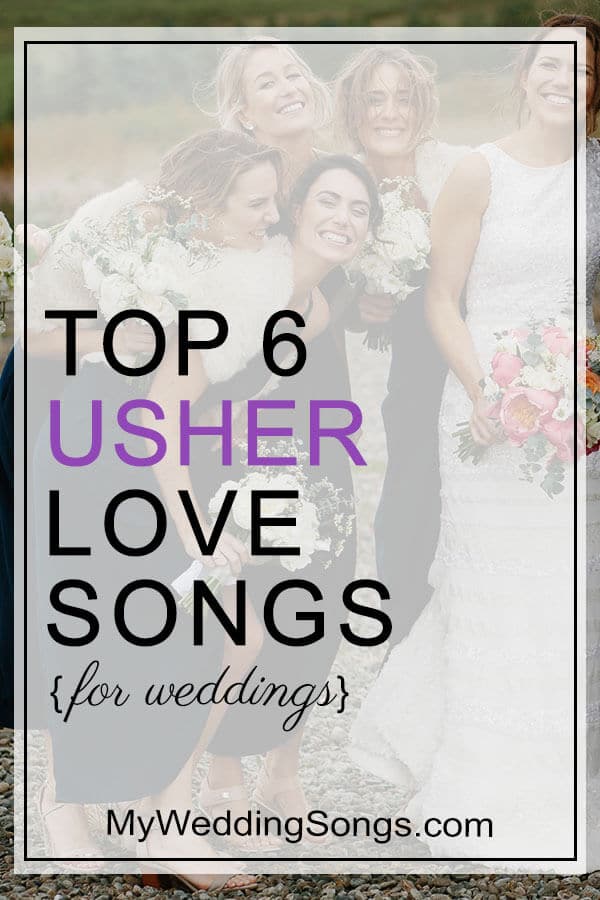 The right music mix of Usher songs can make for a festive celebration, while the wrong one could clear off the dance floor. As many children of the ’90s are getting married, their taste in music ends up influencing the playlist, with mixes of boy bands, grunge rock, and R&B selections.

Without You (David Guetta, featuring Usher)
2011, Nothing but the Beat

Without You is another mid-tempo electronic dance song that is a great mini-break between the higher tempo crowd-pleasers. Technically, it isn’t a song by Usher. He is featured with his beautiful vocals and lyrics expressing his love paired with a dance beat make it perfect for a wedding.

DJ Got Us Falling in Love (featuring Pitbull)
2010, Versus

Another song from the Usher comeback era that also overlapped with Pitbull’s takeover. Instead of an overload of Mr. 305, a dash of him in this Usher favorite is a good way to keep the guests moving. This song is especially fun and a little tongue in cheek when you play it on a dance floor with a DJ spinning.

Love In This Club (featuring Young Jeezy)
2008, Here I Stand

For a more uptempo vibe, without going over the top, Love In This Club fits the bill. It is a more modern classic in Usher’s compilation that would work well as a transition song to get people moving or as a minor break between the big beats that tire out the crowds.

When this song came out in 2004 at the peak of Usher’s fame, it became an instant classic. The duo has a fun, romantic exchange throughout the song, and is fun for couples or a couple of friends to sing to one another. My Boo will keep you swaying with your own boo all night.

The classic of all classic Usher songs. It isn’t a romantic song per se, but if you are including Usher on your playlist, this better be on the top of that list. The nostalgia for the generation getting married, as they remember awkward school dances with this song playing, or in college dorms, will rev all of the guests up and the dance floor will be crowded.

This one is a throwback to Usher’s early career and one of his first big hits. This is the best way to get people in love to enjoy a moment together in the middle of the larger celebration. As its title implies, Nice and Slow is a slow jam that will get all of the couples to the dance floor, led by the bride and groom, of course.

Yes, this is a classic that will remind everyone of the past. However, the message behind the song would be totally wrong for a wedding. The whole storyline of the lyrics, as Usher tells us, is that he is talking to his girlfriend, confessing that he cheated on her. On top of that, he is also admitting that he is going to be a father as a result of cheating. Not really romantic.

Another classic slow Usher jam that is a completely inappropriate song for a wedding. Why? Aside from Confessions, Part II, this is probably Usher’s most popular breakup song and infamous at that. This is because of his (then) recent breakup that everyone assumed inspired the song (it didn’t). With these thoughts in mind, skip this one.

Usher’s first big hit, yes, but with lyrics like: “You make me wanna leave the one I’m with / Start a new relationship with you / This is what you do”, it is not hard to see why this would be a bad choice.

Wedding music should be many things. It should be fun, exciting and also should allow the happy couple to share their love with all of their friends and family. When choosing music artists and specific songs, it is important to have a great mix of those elements. There are so many classic songs out there with new favorites by endless artists. Some, with lengthy careers, like Usher, have so much to choose from. So, the best course of action is to look at the classic songs and find which ones make sense in a wedding reception. With those thoughts in mind, the wedding reception will be a hit and unforgettable when you include selective Usher love songs.