Skip to content
Home > Music Artists > Top 14 Blake Shelton Wedding Songs To Celebrate Love & Fun
My Wedding Songs is a reader-supported website. As an Amazon Associate, we earn revenue from qualifying purchases. Purchases made through links on this page may earn us a commission but also support the artists.

Blake Shelton is an American Country singer hailing from Oklahoma. His first song release, Austin, came way back in 2001 and has been releasing hit songs ever since.

Enjoy our list of Blake Shelton wedding songs, many of them love songs. 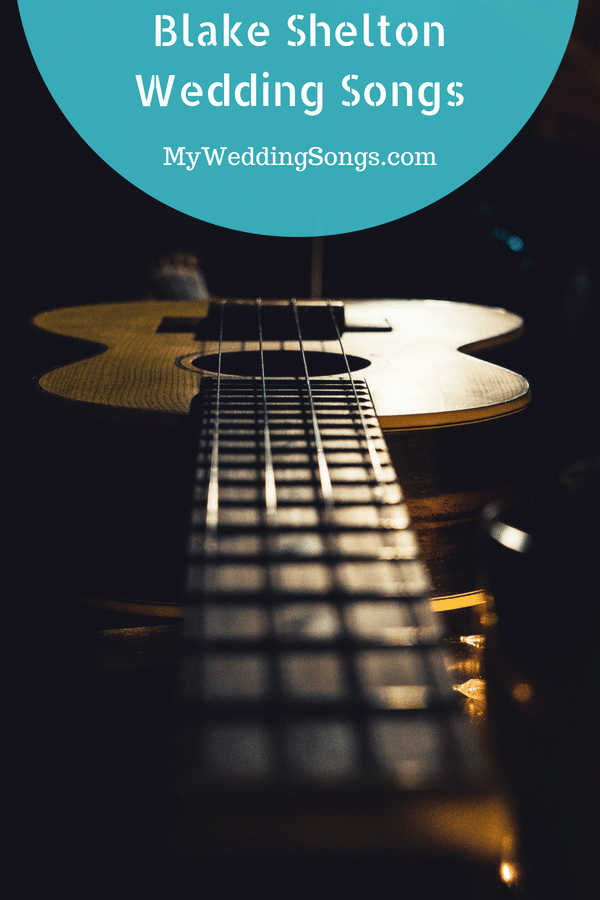 Next to you’s kinda overrated
The winding road, let it twist
My home’s wherever your heart is

I’ll Name the Dogs
2017, Texoma Shore
Another great feel-good wedding song that could be played as a background song, cake cutting song, or even a first dance song.

Beside You Babe
2017, Texoma Shore
Not well known yet but one of my favorite Blake songs. This could be a slower tempo entrance song or a memorable first dance song.

I’ll be right beside you, baby
Till the end of time

A Guy With A Girl
2016, If I’m Honest
Love this song for a unique grand entrance song or processional song.

Mine Would Be You
2013, Based on a True Story…
A slow tempo love song that fits perfectly for many wedding moments.

My best day ever
My finest hour, my wildest dream come true
Mine would be you

My Eyes feat. Gwen Sebastian
2013, Based on a True Story…
A feel-good song of a man admiring his lover. This song would be a perfect song during dinner to get the bridal couple to smooch.

Come a little closer
love the way you look tonight

Mine Would Be You
2013, Based on a True Story…
A slower tempo song love song for a party slow dance song, first dance song, or background song.

My best day ever
My finest hour, my wildest dream come true
Mine would be you

Sure Be Cool If You Did
2013, Based on a True Story…
A slower tempo song perfect for a cake cutting event or party slow song.

Boys Round Here
2013, Based on a True Story…
This is a great garter toss song or a groom and groomsmen party song just for “the boys”.

The boys ’round here
Sending up a prayer to the man upstairs
Backwoods legit, don’t take no shit

Honey Bee
2011, Red River Blue
Because honey is sweet and so is cake, this makes for a great cake cutting song. It also can be a background song.

God Gave Me You
2011, Red River Blue
The perfect first dance song of all Blake Shelton songs. It can also be used as a processional song too.

All About Tonight
2011, Red River Blue
A great song to close out the night or for a party song.

Home
2007, Pure BS
This song has a ton of emotion that could describe your long-distance relationship. It could also play as a parent dance as there’s no place like home.

The Baby
2003, The Dreamer
If you want a Blake song for a Mother-Son dance, this should be your choice.

I could do no wrong.
She would always save me,
because I was her baby

Do you have a favorite Blake Shelton song? Please share it below!