Skip to content
Home > Music Artists > Top 16 George Strait Love Songs & Biggest Hits For Weddings
My Wedding Songs is a reader-supported website. As an Amazon Associate, we earn revenue from qualifying purchases. Purchases made through links on this page may earn us a commission but also support the artists.

When you think of male Country music stars, most will put George Strait at or near the top of the list. He is known as The “King of Country” and the “Troubadour”. 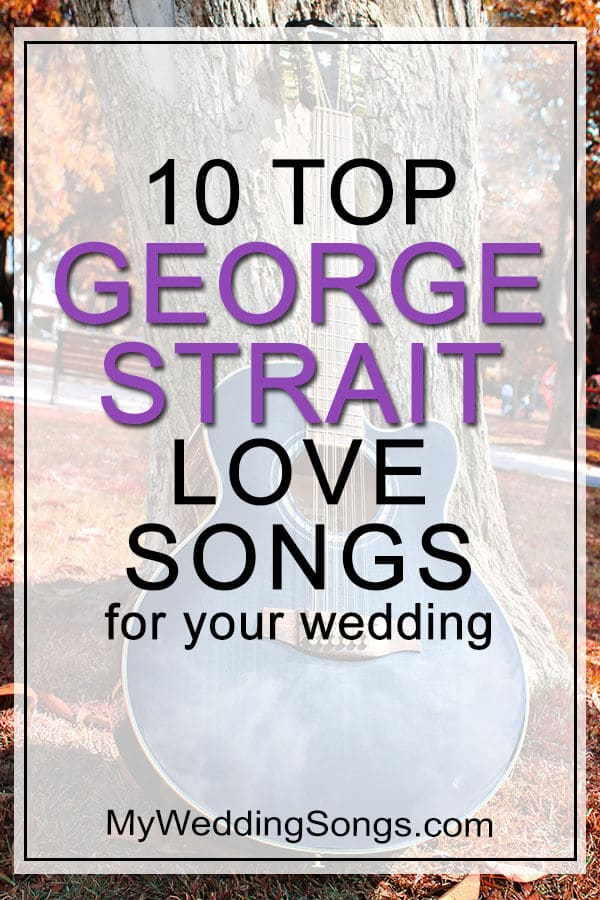 Strait released his first single in 1981 and has been ongoing ever since with 60, oh yes it is true, SIXTY number one hits!

With all sixty number one hits and so much more, you may enjoy songs to celebrate wedding micro-moments.

As the wedding party walks down the aisle, the song Check Yes or No would be a fitting song to play. Will the bride and groom check yes or no to the rest of their lives?

I think this is how love goes
Check yes or no

After the I Do’s are complete, a song to play as you leave the alter would be River Of Love as you start your wedding night and the rest of your life.

And now here are the newlyweds… out of the clear blue sky just like how they met each other.

The cake cutting can commonly be accented with a background song. Just be sure to not drown out any special toasts by the bride and groom. A romantic song choice could be The Man In Love With You

I never could work miracles
There may be others, who can do what I can’t do
But no one else could be, as good as me at loving you

The Chair
1985, Something Special

The first dance is a momentous moment at a wedding reception. All eyes and spotlight are on the bride and groom. No better classic George Strait song fist the love shared between a bride and groom in dance than I Cross My Heart.

The song takes about the day his daughter was born and he I Saw God Today.

The Bridal Party song is typically the song played when the bride and groom invite the bridal party onto the dance floor for a special dance. However, many times other guests can and do join in too. If you are looking for the type of song to get all your guests to the dance floor, consider playing I Just Want To Dance With You

Special Dedication from a Son to his Father

If you want to celebrate a special wedding moment between a father and son (groom), you must play Love Without End, Amen

If you wish to celebrate the longest married couple on your wedding night, a fitting song is We Must Be Loving Right

Cause they’ve never known
A love like yours and mine

We Must Be Loving Right
1993, Easy Come Easy Go

There you have it! I hope you enjoyed our list of George Strait wedding songs to celebrate many wedding micro-moments.

Do you have a favorite, not on the list that would fit into a wedding? Be sure to comment it down below.

With the nickname “The King Of Country”, George Strait has been an icon in the country music and acting scene since 1981. George throughout his career has stayed with his country roots and never accepted the pop-country style. His signature cowboy looks with cowboy boots, cowboy hat and jeans have helped him stay to his country Texas roots. George also commonly plays the acoustic guitar while performing. 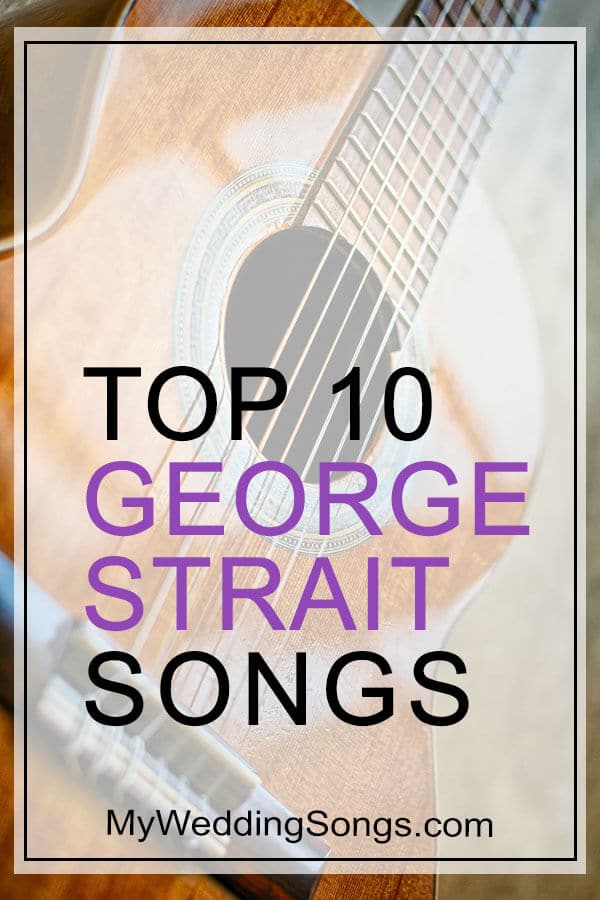 George Strait’s acting career peaked in 1992 with the movie Pure Country. In addition, George Strait has sold more than 70 million music albums in the United States.

#1 Troubadour
Released In 2008
On Album Troubadour
A Troubadour is a person of lyric poets and poet-musicians often of knightly rank from the 11th to the end of the 13th century whose major theme was love.

#3 Carrying Your Love With Me
Released In 1997
On Album George Strait
The song is about a man who has to leave home for periods of time. However, he carries the love of his lover with him wherever he is.

#4 Love Without End, Amen
Released In 1990
On Album Livin’ It Up
The song is about a father’s love for his son even after fighting at school. It doesn’t matter as a father’s love is love without end, Amen.

#5 I Cross My Heart
Released In 1992
On Album Pure Country
A great love song about being in love and giving someone your heart…forever.

#6 Amarillo by Morning
Released In 1983
On Album Strait from the Heart
The song was first written by Terry Stafford and Paul Fraser, and recorded by Stafford in 1973.

#7 Give It Away
Released In 2006
On Album It Just Comes Natural
Give It Away is a great leaving song.

#8 I Saw God Today
Released In 2008
On Album Troubadour
The song is about a man who saw flowers, a couple, sunset, and his newborn daughter — as examples of how he saw God that day.

#10 All My Ex’s Live in Texas
Released 1987
On Album In Ocean Front Property
Did you know he loves in Tennessee because his ex’s live in Texas?