Skip to content
Home > Music Artists > Top 10 Kenny Chesney Love Songs For Your Wedding
My Wedding Songs is a reader-supported website. As an Amazon Associate, we earn revenue from qualifying purchases. Purchases made through links on this page may earn us a commission but also support the artists.

Kenny Chesney is one of the highest-selling Country artists of all-time. Of course, he has released love songs that would be perfect for weddings. See our list below of our favorite Kenny Chesney love songs.

Kenny Chesney had become to be known for his country music with a touch of Reggae and relaxing at the beach style. Kenny’s music career got started with his first album, In My Wildest Dreams, in 1994.

Chesney has released more than 20 albums and had more than forty top 10 songs. 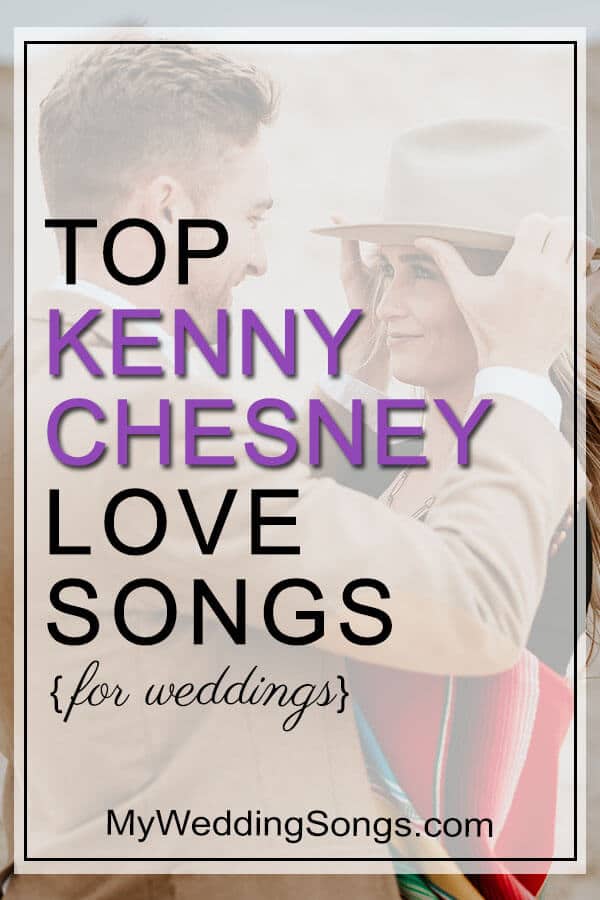 Ends of the Earth
2018, Songs for the Saints

To the ends of the earth would you follow me?
There’s a world that was meant for our eyes to see

Setting the World on Fire (with Pink)
2016, Cosmic Hallelujah

Wrote I love you in lipstick on the mirror
We were shoutin’ out the window, like they could hear us at the pier

Never Wanted Nothing More
2007, Just Who I Am: Poets & Pirates

“You’re here with me, And that’s all I need to know”

“You’re the angel that believes in me like nobody else, And I thank God you do”

For the First Time
2000, Greatest Hits

“Oh these times are hard, Yeah they’re making us crazy, Don’t give up on me baby”

You Had Me From Hello
1999, Everywhere We Go

“The moment I looked into your eyes you won me, It was over from the start you completely stole my heart”

How Forever Feels
1999, Everywhere We Go

“Down on one knee on momma’s front steps, Man I’m gonna die if she really says yes, I wanna know how forever feels”

She Thinks My Tractor’s Sexy
1999, Everywhere We Go

“Well she ain’t into cars or pickup trucks, But if it runs like a Deere man her eyes light up”

“Throughout the day, You’re easy to find, You’re always there, When I close my eyes”

“Suited perfectly for eternity, Me and you”

“A match made in heaven if there ever was”

I’d Love To Change Your Name
1994, In My Wildest Dreams

“Honey I’d love to change your name, Make yours and mine one in the same”