Skip to content
Home > Music Artists > 29 Best Jason Aldean Songs for Your Country-Themed Wedding
My Wedding Songs is a reader-supported website. As an Amazon Associate, we earn revenue from qualifying purchases. Purchases made through links on this page may earn us a commission but also support the artists.

Are you prepping for a country-style wedding and want corresponding songs to your theme? Jason Aldean could add a sweet and sentimental, but country tone to your special day. 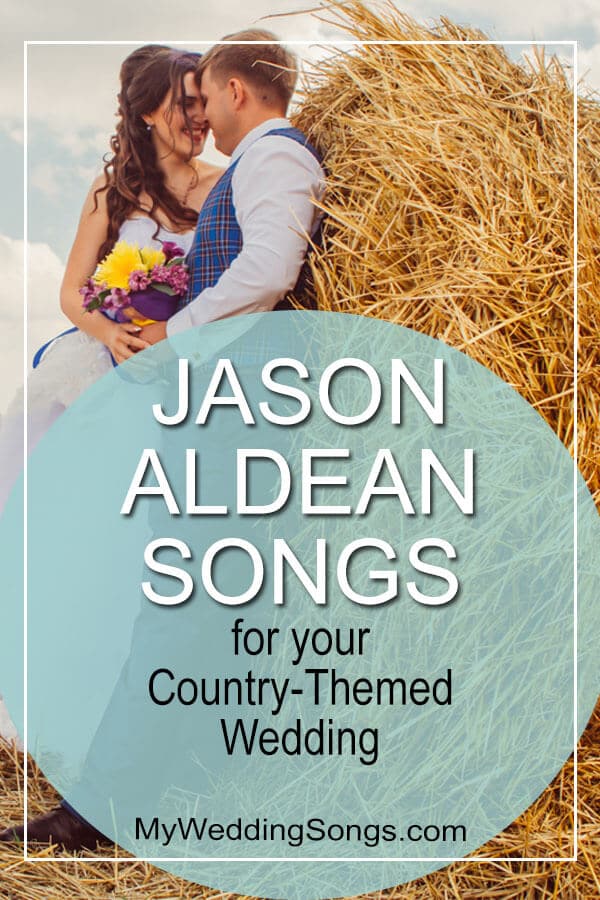 These songs provide a real story to those accustomed to the country lifestyle. While the songs are a pinch on the upbeat side, the lyrics will likely hit home for several couples.

One of the most special moments of the ceremony (besides the vows and that kiss, of course!) is the moment the newly-wed couple shares their first dance together.   Here are some of Jason Aldean’s songs to look into:

Too Fast
2014, Old Boots, New Dirt
In “Too Fast”, he sings about wanting to enjoy every moment with his girl and not moving too fast.

The way it’s been ain’t how it’s gonna be
Baby, starting right now, gonna give you the best of me

She’s like standin’ in the rain
Washes all my cares away
At the end of a long, hot day

Don’t You Wanna Stay with Kelly Clarkson
2010, My Kinda Party
“Don’t You Wanna Stay” can be taken from two different stances. Some might see it as more of a “goodbye” song, but the lyrics also imply a genuine love that the couple does not want to release.

Yeah, I’m just here to love you girl,
It’s your world, and I’m just passing through

Don’t Give Up On Me
2009, Wide Open
In “Don’t Give Up On Me”, he expresses his supposed failures and the loyalty of his partner. While he failed at several things in life according to the song, he did not fail in loving her.

If you desire to include a sweet, family-oriented song, you might want to look into “Laughed Until We Cried”. The song sets a mood for sentimentality and reminiscence on treasured memories.

Laughed Until We Cried
2007, Relentless

Oh man, we were livin’
Sittin’ there reminiscin’
We sang, and talked, and traveled back in time
We laughed until we cried

The Groom and His Groomsmen

Making the stars fall right on queue
I just gotta tell you, baby
Tonight looks good on you

Yeah, I’m chilling on a dirt road
Laid back swervin’ like I’m George Jones
Smoke rollin’ out the window
An ice cold beer sittin’ in the console

It Ain’t Easy
2010, My Kinda Party
His song “It Ain’t Easy” depicts his realization that he found someone to love him despite how difficult it is to love him.

Crazy Town
2009, Wide Open
If your spouse wants songs played for him and his buddies, you might consider Aldean’s song “Dirt Road Anthem” or his song “Crazy Town”.

From the Groom to the Bride

If your husband plans to sing to you or has a song he wants to dedicate to you at the wedding, whisper some of these ideas in his ear:

No
2007, Relentless
The song “No” represents a powerful sacrifice of accepting hard circumstances to reach the one you love.

Relentless
2007, Relentless
“Relentless” expresses the ceaselessness of his woman’s love for him.

I can’t fight it
There’s no hiding
Oh, your love is relentless

Seeking fun, light-hearted reception songs that are still wedding-oriented? All of the previously mentioned songs serve as wonderful reception songs as well, but here are several of Jason Aldean’s songs to consider:

Bad
2016, hey Don’t Know
If you are hoping to add some “spice” to the sugar at your wedding, you might want to consider playing “Bad” at your reception. The song portrays how much he loves when she acts good, but he

loves it more when she acts wild
I never know what I’ll get when we get together
When you’re good, you’re good
But when you’re bad, you’re better

Underneath the stars or the lights of town
In a car, in a bar, girl when this night ends
Let’s make it one of the ones we won’t forget

Baby, when the lights go out
I wanna hear that want you sound
On your lips when I lay you down

Comin’ In Hot
2016, They Don’t Know
“Comin’ In Hot” describes Aldean preparing to see her after they have been temporarily separated.

Show You Off
2014, Old Boots, New Dirt
In “Show You Off”, the title alone represents every woman’s desire for her man to want to show her off! Jason Aldean sings of his appreciation for everything his woman encompasses and of his desire to show her off to the world.

I just want the world to see how lucky I am
It’s a fine girl, damn, be all I ever saw
I just want to show you off

Man I swear there ain’t nothing looks better than that
Sweet tan, little thing with nothing to do
I wanna take a little ride with you

When She Says Baby
2012, Night Train
“When She Says Baby” shows that his partner’s presence can calm any trial he is facing. It’s an upbeat song as well and is very fitting for couples who have endured difficult trials in life!

Everywhere, it’s where we are
It gets me right, in my heart

She’d never seen a glowing field of fireflies
Or the twinkle of a star in a southern sky
She fell in love, we went down to

My Kinda Party
2010, My Kinda Party
What better song to use at your wedding celebration than a song titled “My Kinda Party”? The song insinuates the idea that his girl is his “kinda party.”

Chillin’ with some Skynyrd and some old Hank.
Let’s get this thing started.
It’s my kinda party.

This I Gotta See
2009, Wide Open
“This I Gotta See” is slower-paced than the majority of his songs, but still upbeat. This song highlights little details about his partner that he adores.

In my sweatshirt
And her bare feet
This I gotta see

She’s country, from the songs she plays to the prayers she prays
That’s the way she was born and raised, she ain’t afraid to stay, country
Nothin’ but country

Big Green Tractor
2009, Wide Open
Aldean’s “Big Green Tractor” song is certainly one of his most popular hits. Almost everyone knows the lyrics to this tune, and you are guaranteed to have your guests singing along at the reception!

Girl, you know you got me to hold onto
We can go to town, but baby, if you’d rather
I’ll take you for a ride on my big green tractor

Jason Aldean is the king of finding beauty in small details, which are crucial aspects of a wedding. Give these songs a listen to find the most suitable songs for your special occasion!

Do you have a Jason Aldean song, not on our list perfect for weddings? Please share your song below so that we can add it!