Skip to content
Home > Music Artists > Brad Paisley Love Songs For Your Wedding – Top 10 List
My Wedding Songs is a reader-supported website. As an Amazon Associate, we earn revenue from qualifying purchases. Purchases made through links on this page may earn us a commission but also support the artists.

Brad Paisley is an American (West Virginia) country music superstar. He first came onto the country music scene in 1999 with the release of his first album Who Needs Pictures. Paisley is still producing albums today. 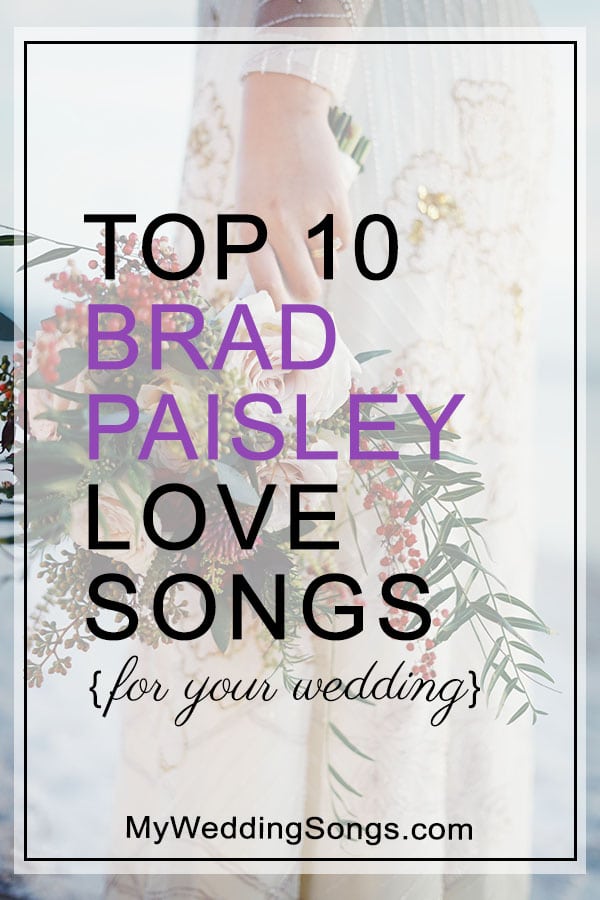 Brad Paisley has received many awards within the music industry including the coveted Country Music Awards Entertainer of the Year. Paisley has had Nineteen top-charting number one hit on the U.S. Billboard Country Charts.

With all of the great songs produced by Brad Paisley, it has been difficult to create a list of his best songs. However, below see the list of the Top 10 Brad Paisley love songs for weddings. We do list bot slow tempo and fast tempo songs. We included songs all about bugs, how a woman is the center of the universe, about small events in our lives, and another featuring another country superstar as a duet.

Today
Released in 2017 on album Love and War

Perfect Storm
Released in 2014 on album Moonshine in the Trunk

“I never meant to fall like this, But she don’t just rain, she pours, That girl right there’s the perfect storm”

We Danced
Released in 2010 on the album Who Needs Pictures

“I pulled a diamond ring out of the pocket of my shirt, And as her eyes filled up with tears, She said, “This is the last thing I expected”

Anything Like Me
Released in 2010 on album Hits Alive
*Makes for a great dedication song between a father and son.

“And I started wondering who he was going to be, And I thought heaven help us if he’s anything like me”

Then
Released in 2009 on album American Saturday Night

“I got down on one knee right there, And once again, I thought I loved you then”

“I’d like to kiss you way back in the sticks, I’d like to walk you through a field of wildflowers, And I’d like to check you for ticks”

“You can break a heart in pieces, Put it back together again, You can break down sweet forgiveness
You’re the one that never ends, oh love”

She’s Everything
Released in 2006 on album Time Well Wasted

“She’s the hand that I’m holding, When I’m on my knees and praying, She’s the answer to my prayer
And she’s the song that I’m playing”

The World
Released in 2006 on album Time Well Wasted

“To the world, You may be just another girl, But to me, Baby, you are the world”

“Love is never-ending, tt keeps goin’ on and on, Long after we’re all gone away”

Little Moments
Released in 2003 on album Mud on the Tires

“When she steals my heart again and doesn’t even know it, Yeah, I live for little moments like that”