Skip to content
Home > Music Artists > Top 17 Luke Bryan Love Songs for Your Wedding
My Wedding Songs is a reader-supported website. As an Amazon Associate, we earn revenue from qualifying purchases. Purchases made through links on this page may earn us a commission but also support the artists.

Luke Bryan can claim to be among the brightest stars in the history of country music. His work includes many love songs and wedding songs that are sure to create a special day. Here’s a closer look at Luke Bryan and some of the most popular Luke Bryan love songs.

Luke Bryan began his career in country music as a songwriter, a common path for many modern stars. Bryan wrote chart-topping hits for artists such as Travis Tritt before he secured his own recording deal in 2007. Since then, Luke Bryan has become a mainstay of the country music industry with multiple albums and singles at the top of the charts.

The industry has made Luke Bryan one of the most awarded artists of the new millennium, with CMA and ACM honors for Entertainer of the Year in 2013. Bryan retains a strong connection to the roots of country music while also creating a modern sound with his vocals.

More than 75 million records have been sold by Bryan. In recent years he has also become known as a judge on the talent show, American Idol. Bryan appeals to both young fans of country music and older adults that grew up on classic Opry artists. 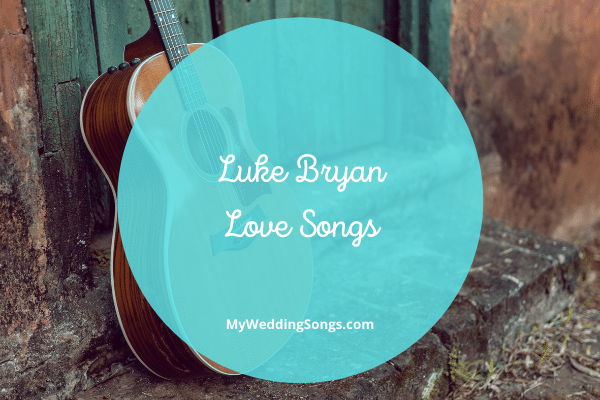 Luke Bryan was really beginning to hit his stride when this song was released in 2011, and fans of the country singer still choose it for their wedding celebrations today. The song has a mild tempo that is perfect for dancing, and it is sometimes chosen as the song for the first dance between the happy couple.

Down to one beautiful smile
I was done with the girl I want
Straight fallin’ in love, right there that night
Down to one

Bryan proved that he can remain relevant in the modern era with this song from 2020, a love ballad that speaks of the magic moment when a couple meets and connects. It has been used as a non-traditional part of the wedding processional, and can also be played as your wedding guests are taking their seats.

There is always room for a few naughty songs on any wedding reception playlist, but this song from Luke Bryan keeps its sensual theme classy and fun. It is the perfect type of song to save for the end of the night when the happy couple is preparing to depart for honeymoon happiness, but guests will love it at any moment.

This is a fun Luke Bryan song that topped the charts in 2013, and it will be a hit with all of the country line dancing fans at your wedding. This one should be used early in the evening when the energy is high and everyone wants to party the night away, or you can use it to boost the party vibe later.

Crash into me and pull me closer
Kiss by kiss, one after another
Don’t let go, baby let this summer
Just keep on coming in waves

One of Luke Bryan’s strengths is the ability to create memorable lyrics that are filled with strong imagery, and this ballad is vibrant in its description of love and longing. Many couples use it for a first dance, but it has also been played as the bridal party is taking up their positions at the altar.

Yeah, I’ll be right beside you
On a roll or off the tracks
To the ends of the Earth
To the moon and back

Every wedding day can benefit from some simple songs that send a clear message of devotion, and that’s why this Bryan ballad is a good wedding song choice. It isn’t flashy, but it will get the point across that the two of you are committed to one another on a level that transcends simple romance and affection.

I Don’t Want This Night to End
2011, Tailgates & Tanlines

And I don’t know what road we’re on
Or where we’ve been
From starin’ at you, girl
All I know is I don’t want this night to end

No couple would want the magic of their wedding night to end, and you can extend it just a little bit longer with another love ballad from country star Luke Bryan. So many of Bryan’s songs are made for dancing, and wedding guests of all ages will be inspired to move when this one is played.

I just think of you
And everything you do
You’re my one, my from now on
My first love song

You would have to go back to the very first album from Luke Bryan’s award-winning career to find this popular hit, a song that is still heard at many modern weddings with a country theme. There are few songs that are better suited for the grand entrance to the reception hall than this one, and it can also be played as the couple exits the wedding chapel following the vows.

Let it out, tell me right now
Everything I need in them white cotton sheets
Dirty dance me slow in the summertime heat

Make sure that you save this Luke Bryan song for the more seductive portions of the evening, and that usually means the wedding reception. It is a song that couples of any age would enjoy dancing to, and the mild naughtiness of the lyrics won’t be offensive to your guests.

Come on and trust me, honey
I can turn those raindrops sunny
Let me untie that tangle
Put on that kissing angel good morning song

The message of this song is taking all of her cares away at the end of a hard day, but it can also imply taking them away for a lifetime when you play them at your wedding reception. Try something different and cut the cake to it, or use it as a soundtrack when the unity sand is poured.

True love does not wait for the perfect moment of expression. Here is a Luke Bryan wedding song that would be perfect as the first dance between newlyweds, or it can make for a pretty nice send-off at the end of the festivities.

In Love With the Girl
2013, Spring Break…Here To Party

The whole experience of falling in love is at the heart of this song from Luke Bryan, a country hit from 2013 that was co-written with Cole Swindell. Just add it to your DJ’s list of tunes and take a few moments to savor that feeling of falling in love once again.

Would you rather just turn away and leave me lonely
Do I just need to give up and get on with my life
Baby, do I

“Do I” may not seem like a wedding song at first, but listen closer and you will hear why many fans of Luke Bryan like to add it to their list of wedding reception dance tunes. It has a poignant message that wedding guests can relate to, and some couples have even said it describes the arc of their own love affair.

Well, I never met a girl like you
That’s got me thinking like I do
To hang up my hat and kick off my boots
But you make me want to

Let a song from the 2007 debut album of Luke Bryan convey how much your new spouse means to you when you have this song played for dancing. Just remember, let everyone join in the fun when it comes to wedding day country line dancing.

Do you have a favorite Kane Brown love song? Please share your song below and why it is special to you.