Skip to content
Home > Music Artists > Top 12 Florida Georgia Line Love Songs & Party Songs
My Wedding Songs is a reader-supported website. As an Amazon Associate, we earn revenue from qualifying purchases. Purchases made through links on this page may earn us a commission but also support the artists.

Florida Georgia Line has proven itself to be a consistent force in modern country music. This musical act of two friends from the American South have combined to produce many memorable love songs and party songs. Here’s a look at the best you’ll find in each category. 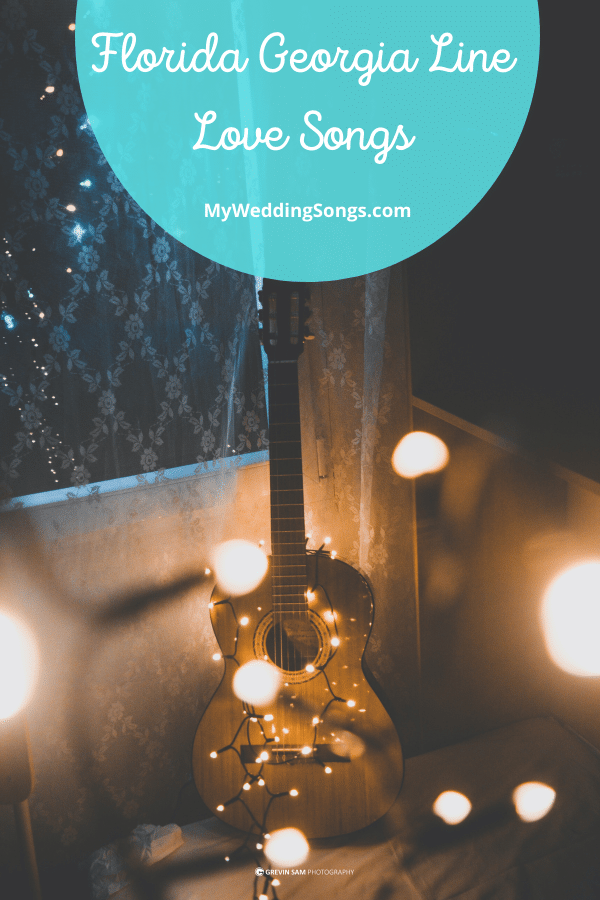 Florida Georgia Line was founded in 2010 by two singer-songwriters, Tyler Hubbard and Brian Kelley. The first single from the group, “Cruise”, spent an amazing 24 weeks in the number one spot on the charts. It was the most successful digital song in country music until 2017.

Some have referred to the work of Hubbard and Kelley as “Bro-Country”, a genre all its own. The style of the duo is best described as country with classic and southern rock influences. Hubbard and Kelley write most of their own material, and they have also written for other artists. Florida Georgia Line has also collaborated with a number of artists in other genres.

In February 2022, Florida Georgia Line announced that they were taking a break from performing and recording together. This announcement came following speculation that the duo had separated on philosophical grounds. Both artists have spent some time pursuing solo careers in the past.

You’re an angel, tell me you’re never leaving
Cause you’re the first thing I know I can believe in

This is probably the top love ballad and wedding song for fans of Florida Georgia Line, and the title is an acronym for High On Loving You. The lyrics describe that commitment which is shared by newlyweds, and they are filled with a rich symbolism that all wedding guests will be able to appreciate.

This could be the perfect Florida Georgia Line love song if you are wanting to craft a non-traditional wedding processional, or maybe it just reminds you of that special time when he popped the question and the world stopped spinning. It was released in 2016 and continues to be one of the most-requested hits of this country duo.

I never dreamed that you could be so perfectly created, girl
He made a perfect angel
And he made you just for me

The first dance at a wedding reception between two happy newlyweds would be a perfect time to play this song, or maybe it has been a song that you and your partner have danced to in those years since you said your vows. It is a song that references the importance of being blessed in our relationship, and reminds us to be grateful each day for true love.

You know I’m always gonna be here for ya
No one’s ever gonna love you more than
God, your mama, and me

Florida Georgia Line got a little bit of help from the Backstreet Boys on this song from 2016, a love ballad that has been used in wedding receptions for a dance between father and daughter. The lyrics can be taken many ways, but some listeners also hear this as a promise from a father to his infant daughter.

2021 was a difficult year for this country duo as the individual band members sought to advance their own solo careers, but Tyler Hubbard and Brian Kelley proved that they still had something to offer as a group with this love song. In the lyrics you will find all of the promises and vows that are commonly shared by those who are planning their wedding day, so feel free to use it in your ceremony.

This song by Bebe Rexha features Florida Georgia Line in a supporting role, and it was released in 2017 to become a top single for the popular female artist. It is an example of the type of love song that has come to define the career of Florida Georgia Line, one in which the simplicity of the ballad’s lyrics works to convey a deep sentiment.

This is one of those love songs that describes the aftermath of a breakup, so it might not be the best choice for a wedding. Still, true fans of Florida Georgia Line will appreciate the song for what it is – a sentimental ballad with a power pop, 80’s-inspired drive.

I’ll break out my big wheel and you can climb on up
Girl, I think you a big deal, now show your boy some love
Huh, just a lil’ bit

Florida Georgia Line has done a number of collaborations with other artists during their career, and this one with Nelly could be the best of them all. It is a song that will inspire everyone to dance, and it shows that good music of any genre has the ability to bridge generations.

We light it up with our hands up
This is how we roll, this is how we do
We’re burning down the night, shootin’ bullets at the moon, baby

One of the favorite country duos of the modern era joined forces with Luke Bryan to release this Florida Georgia Line party song in 2012, and as expected the song spent a good deal of time on the charts. It immediately became a favorite for young people who like bonfires in the summer, good music, and good times spent with good friends.

Would look a hell of a lot better with you up in it (come on)
So, baby, you a song
You make me wanna roll my windows down and cruise

In 2012 this song was among the first group of radio hits for Florida Georgia Line, and since that time the group has gone on to create a lasting legacy in modern country music that sprang from this release. The laid-back, enduring vibe of this song is something most people can relate to, and it was created to be played at top volume in the car with the windows down.

This was one of the most successful singles from Soundtrack To Summer 2018, a Florida Georgia Line album made to celebrate the party atmosphere. No one could have known at that time that the world was on the verge of a global pandemic that would halt many summer activities for two years, so this song has an even deeper significance when you listen to it with that awareness.

Feelin’ lucky, got hooked up with some Kentucky Clear
So slide that little sugar shaker over here
And get your shine on

This song was released in 2012, and it is a reminder that we all need to let our problems go at times and just enjoy life. No one should feel guilty about being the best version of themselves, so play this as a dedication to your own glorious perfection.

Do you have a favorite Florida Georgia Line love song? Please share your song below and why it is special to you.