Skip to content
Home > Music Artists > Top 10 Brooks & Dunn Songs For Husbands & Wives
My Wedding Songs is a reader-supported website. As an Amazon Associate, we earn revenue from qualifying purchases. Purchases made through links on this page may earn us a commission but also support the artists.

Country music has not been the same since Brooks & Dunn released their first album, Brand New Man, in 1991.

Kix Brooks and Ronnie Dunn were inducted into the Country Music Hall of Fame in 2019. 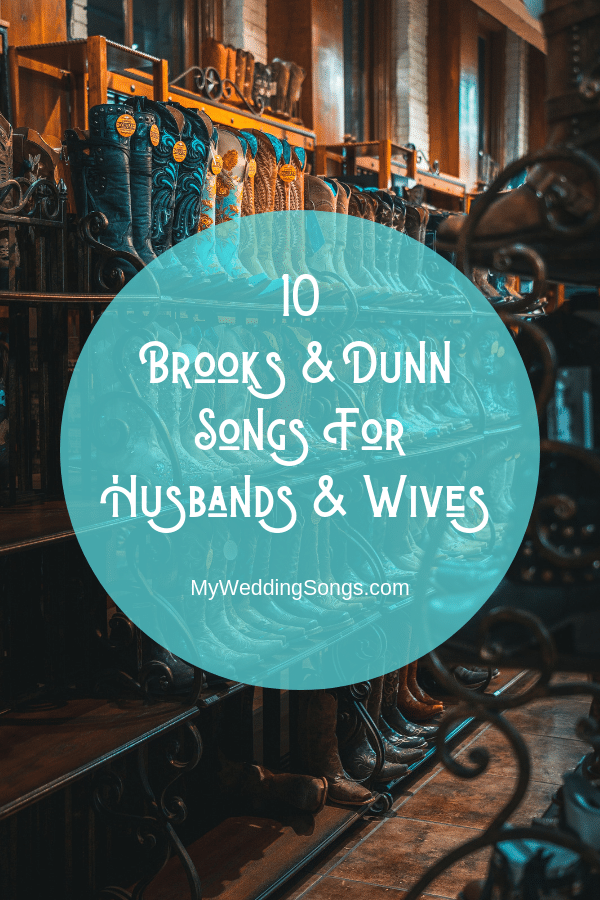 Proud of the House We Built
2007, Cowboy Town
A great anniversary song!

Lot of things will come and go
But love never will
Oh, I’m proud
I’m proud of the house we built

Play Something Country
2005, Hillbilly Deluxe
If you looking to have a party atmosphere, this is the perfect song to get things started and fill the dance floor.

Something thumping from the city
Said “I, I shaved my legs, I paid my money”
Ha oh ho, play something country”

Believe
2003, Red Dirt Road
If you want to remember a loved one at your wedding, “Believe” is a great song for Brooks & Dunn fans.

In the words written in red
They tell me that there’s more to life
Than just what I can see, I believe

Ain’t Nothing ‘Bout You
2001, Steers & Stripes
The song talks about how a woman really turns on her man and she is all that he needs.

You’re My Angel
1998, If You See Her
Not one of their most well-known songs but the best choice for a first dance song in their discography. “You’re My Angel” would be a perfect bride entrance song too.

Husbands and Wives
1998, If You See Her
While they have had many hits, our favorite Brooks & Dunn song is Husbands & Wives – the perfect mid-tempo waltz song. It was originally released by country legend Roger Miller in 1966. Even though the song talks about couples breaking up, the song still can commemorate husbands and wives in attendance.

My Maria
1996, Borderline
One of their biggest hits that everyone in attendance will be toe-tapping to. Even though the song was first released as a rock song in 1973, Brooks & Dunn put their own Country twist to it and made it into a monster hit.

Rock My World (Little Country Girl)
1993, Hard Workin’ Man
Another one of those songs that will get the women in attendance on the dance floor. It could also be a great bouquet toss song too.

Boot Scootin’ Boogie
1992, Brand New Man
Released on their first album “Boot Scootin’ Boogie became a mega line dance song hit and still remains so today. If you are looking to fill the dance floor with all ages, this song will do so.

Neon Moon
1991, Brand New Man
Their debut album adds another song to our list. If you are looking to slow things down with a country two-step, “Neon Moon” should be at the top of the list that everyone will recognize and dance to.

Brand New Man
1991, Brand New Man
An up-tempo song but makes for the perfect Country love song. If you are looking for a song about how a woman is a perfect match for the groom, this is it.

There you have it. Our list of favorite Brooks & Dunn wedding songs to add to your big day playlist. If you have a favorite, not on our list, be sure to comment on it below.

Check out other artists’ song lists such as: