Skip to content
Home > Music Artists > 17 Best Garth Brooks Love Songs For Weddings + Lyric Quotes
My Wedding Songs is a reader-supported website. As an Amazon Associate, we earn revenue from qualifying purchases. Purchases made through links on this page may earn us a commission but also support the artists.

This list of Garth Brooks wedding songs has many choices that you can use to create magic on your wedding day. Love ballads by Garth Brooks remain among the most popular country music songs that have ever been recorded.

Garth Brooks was born and raised in Oklahoma. In the early 1990s, Brooks emerged as a successful songwriter and recording artist, dominating country radio with a number of hits. Brooks has sold millions of records across the world, and still sells out arenas today.

Brooks took a long break from country music in the 2000s to raise his daughters. Once the children were grown he returned to touring. He has since been named the CMA Entertainer of the Year on several occasions including in 2019. This makes Brooks the all-time record holder for the award.

In 2020 Garth Brooks announced that he would begin a stadium tour of the largest arenas in the world. 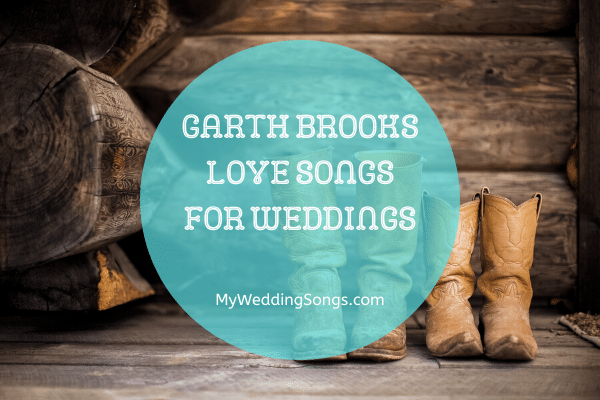 As a songwriter, Garth Brooks has contributed many songs to the celebrated landscape of country music. Most of the songs by Brooks are love ballads that can be used as wedding songs. Among these songs, you will find themes of commitment, trust, and lifelong devotion.

And every day I wake up and she tells me that she loves me
I feel more like a man
You know, I always thought I had to have the answers
Be her strength and take the lead

Mom
2014, Man Against Machine
A song you can play for the Mother-Son dance or special dedication.

‘Cause there’s someone down there waiting whose only goal in life
Is making sure you’re always gonna be alright
A loving angel tender, tough and strong

The theme that love conquers all is one frequently expressed on your wedding day, and this song from Garth Brooks is filled with the positive spirit of overcoming life’s challenges with the help of a partner. You will want to include it in the wedding reception when all eyes are on you and your new spouse.

How do I love you, we’ll count the ways
There ain’t a number high enough to end this phrase
Baby, completely wrapped up in you

Couples who want to let one another know how devoted they are will want to add this song to their wedding reception playlist, and it can also be performed karaoke-style by grooms to create a special moment. It is a simple song that celebrates the joy of loving, something that you should be conscious of on your wedding day.

To Make You Feel My Love
1998, Hope Floats Soundtrack

A man that would go to the ends of the world to satisfy his partner is the theme of this song, a love ballad that is sometimes played during the wedding processional of modern couples. It can also serve as the music for the cutting of the wedding cake, or it can simply be played as guests arrive to set the desired mood.

Any couple that wants to use a country music song for a non-traditional processional will want to add this one to their list of wedding choices. It hits all the right notes when it comes to expressing the purest form of love couples can know.

A wedding day should be all about the way a couple makes one another feel, and this song is a sultry expression of the desire that inhabits a relationship. It would be a nice song to add to the wedding day festivities as the night comes to a wonderful close.

Every wedding needs some special music that is reserved especially for the bride, and this one speaks of the unique things that make her one of a kind. Honor her womanhood when you have this played especially for her at the wedding reception.

Ain’t Goin’ Down (‘Til the Sun Comes Up)
1993, In Pieces
A great song to play as you enter into the reception venue.

Yes I do think about you every now and then
I love my life and I’d never trade
Between what you and me had and the life I’ve made
She’s here and she’s real, but you were too

Simple and straightforward, this country classic should be on the wedding reception playlist of every couple that wants to honor their musical appreciation for country music. It can be used in almost any part of a wedding ceremony.

Some songs capture what it feels like to fall in love, and this is one of those love ballads. You can play it at your wedding to remind you of what those first glorious days of happiness felt like, and also to create a wedding memory that you can recall through the years.

I’m shameless, baby I don’t have a prayer
Anytime I see you standing there
I go down upon my knees

Garth Brooks covered this Billy Joel song to perfection in the 1990s, and it still tops the list of best Garth Brooks love songs. In the song, Brooks sings of being totally in love with that special woman, and also of the lengths to which he is willing to go to make her happy.  A great song to play for the garter removal or garter placement.

This Garth Brooks song is one of hope and the desire to be a better person, just the things that should be the dream of every couple as they take their wedding vows. This is the song that you should save for the wedding send-off at the end of the night, but you could also use it when pouring the unity sand.

She’s my easy lovin’ woman, I’m her hard workin’ man, no doubt
Yeah, we’re two of a kind
Workin’ on a full house

This is a fun song that will have everyone thinking about the possibilities of the happy couple’s future. Many couples have chosen to use this song as their recessional or as the song that accompanies them to the reception hall.

Friends in Low Places
1990, No Fences

And I’ll be okay
I’m not big on social graces
Think I’ll slip on down to the oasis
Oh, I’ve got friends in low places

This song makes the list of Garth Brooks wedding songs because it has become an anthem for all kinds of celebrations, and that includes wedding reception party songs. The best time to use it at yours is near the end of the night when everyone is feeling nostalgic, and don’t be afraid to invite everyone to sing along.

This song from Garth Brooks is about taking chances in love and how those opportunities can be life-changing, a theme that runs through many of Brooks’ classic hits. At weddings, this song is most often used for the first dance between the newlyweds, and it is sometimes chosen simply because it is Brooks’ biggest hit record.

If tomorrow never comes
Will she know how much I loved her?
Did I try in every way to show her every day
That she’s my only one?

This song was one of the first hits for country legend Garth Brooks, and it is still a favorite today among those who attend his live performances. Brooks sings here of the importance of loving and living in the moment, just the type of thoughts that you want to convey to your guests on your wedding day.

There you have it.  Our list of favorite Garth Brooks love songs to add to your wedding playlist.  If you have a favorite, not on our list, be sure to comment on it below so that we can add it.