Skip to content
Home > Music Artists > Top 12 Kane Brown Love Songs for Your Wedding
My Wedding Songs is a reader-supported website. As an Amazon Associate, we earn revenue from qualifying purchases. Purchases made through links on this page may earn us a commission but also support the artists.

Kane Brown is an American singer that embodies the modern sound of country music. His sensitive love songs can add joy to any wedding. Here’s a look at this young country artist and a few of the top Kane Brown wedding songs.

Kane Brown hails from Tennessee, and it shows in his vocal abilities. Brown has a unique voice that honors the country music of the past while merging it with a modern approach. Kane Brown was the first artist to have a simultaneous number one on all five Billboard country charts.

One can hear the influences of country stars like Charley Pride and Randy Travis in Brown’s soulful delivery. He was originally a performer on social media where his songs gained quick recognition in 2015. By 2016, Kane Brown had released a self-titled debut which got the attention of music critics.

Kane Brown is not afraid to push the envelope where country music is concerned. He has become one of the new faces of Nashville thanks to his willingness to take chances with his music that other artists avoid. 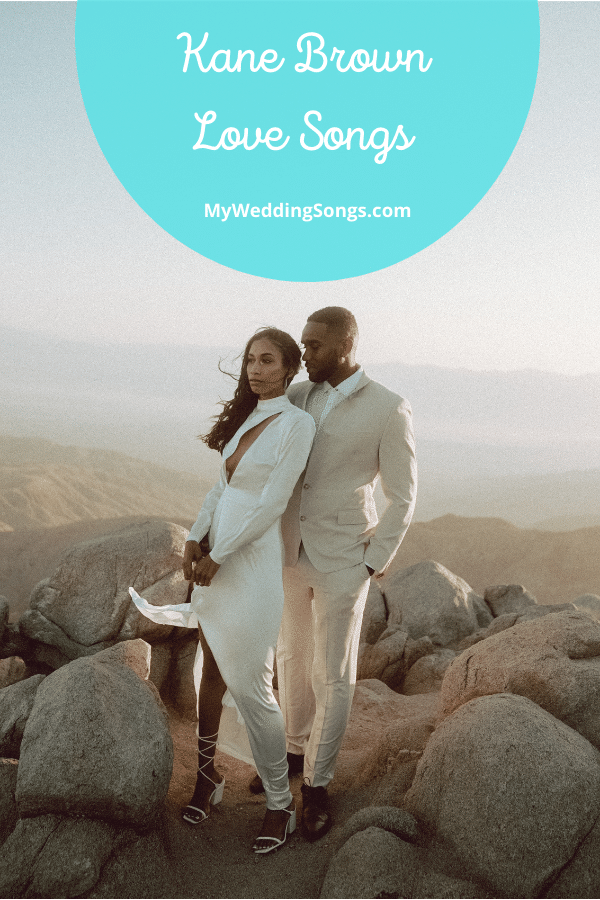 This song was one of the first singles from Kane Brown’s self-titled debut album in 2016, and it has come to define the style of country music that Brown is known for. It has romantic lyrics that will resonate emotionally with your wedding guests, and the tempo is mild enough that the song could be used as a first dance song.

Girl, you’re more than just the surface
Yeah, you got that heart of gold
So when it comes to lovin’ you, baby
No, it will never get old

Many songs in the catalog of Kane Brown seem to have been written with weddings in mind, and a ceremony is even referenced in this video for this song from 2018. For this reason many couples and fans of Brown have chosen to have this song played while the bride makes her journey down the aisle.

Kane Brown continued his success in country music with this chart-topping hit from 2021, another romantic ballad that is perfect for any couple that needs a special wedding song. You can build your entire ceremony around this tune, but it can also be used right before the bride enters the wedding chapel.

Just holding, onto you tonight until mornin’
Baby, that’s the damn truth
If home is where the heart is
I’m homesick for you

This Kane Brown love song is so perfect for weddings that Brown was compelled to release a special edit for first dances between happy newlyweds. The sentimentality of the lyrics in addition to the easy tempo make this a song that should not be omitted from your DJ’s wedding day playlist.

Brown included this song on his first album, and it went a long way towards making Kane a modern-day mainstay on the country charts. It has the right message that you want to convey on wedding day, and there won’t be a dry eye in the house if you choose to dedicate it to bride with a celebratory toast.

What’s Mine Is Yours
2017, Kane Brown (Deluxe Edition)

All my pain, washed away, in the blink of an eye
Yeah, you saved me
You got all of me and I don’t need it anymore
What’s mine is yours

Good wedding songs are those which reference a commitment between partners, and that is the theme of this country ballad. It is a song that is best saved for the reception, but the lyrics make it a superb choice for the cutting the wedding cake song.

The way you’re dancin’, swayin’ to the music
Girl, that body, and how you move it
Every time you cross my mind
Girl, I lose it

Some may not see this 2018 Brown hit as a wedding song, but a closer listen may shed some appreciation for this number as a dance tune. There is always room on the playlist for songs that step out of the love song mode, and you can use this one to keep your guests dancing and merry.

Running with the wrong crowd on the wrong nights
‘Cause I’ve been wrong about a million times
But I got one thing right, you

We often feel as though the one thing we did right was marry the person of our dreams, and few songs capture that feeling as well as Kane Brown’s 2019 collaboration with Marshmallow. This is a party song, plain and simple, so crank the volume and use it to pump up the energy at your wedding reception.

Grooms should always designate a few wedding songs that are meant to celebrate the bride on her special day, and some grooms even take a try at singing this one with the wedding band. You don’t have to go that far when you choose to play this as a first dance with your everything, but a little effort at the microphone could go a long way.

So keep that cherry red lipstick sticking on me
Yeah, let’s just keep
Just chillin’ on the weekend, weekend

Few songs can do a better job of setting the mood when it comes to a wedding reception than this one from 2018, and the non-traditional vibe will appeal to many modern fans of country music. Many couples can choose to enter the wedding chapel to this song, and others have used it as the final song of the evening when the honeymoon awaits.

One of the most popular songs from Kane Brown’s 2016 debut album, “Thunder in the Rain” evokes a sensuality that can add some fun to the selections on your wedding playlist. It is definitely a song for dancing with the one you love, and most couples like to use it to highlight themselves.

For My Daughter
2019, Experiment Extended

They say history repeats itself
Well, I guess that’s up to me
Yeah, I grew up without a dad
I’m gonna be the best one I can be

It can be difficult to find the perfect song for a father-daughter dance at a wedding, but that seems to be the very purpose of this poignant ballad. Everyone will appreciate the special bond between a bride and the one who loved her first when you have the two dance to this Kane Brown song.

Do you have a favorite Kane Brown love song? Please share your song below and why it is special to you.