Skip to content
Home > Music Artists > 11 Best Bill Withers Songs For Lovely Weddings
My Wedding Songs is a reader-supported website. As an Amazon Associate, we earn revenue from qualifying purchases. Purchases made through links on this page may earn us a commission but also support the artists.

Bill Withers was one of the greatest R&B soul singers of all time.  His songs had a way of pulling at your heartstrings and made you feel exactly what the songs were trying to describe.  Here is a list of Bill Withers songs to add to your wedding playlist.

In 1938, William Harrison Withers Jr. was born in West Virginia.  Withers signed his first record deal in 1970 with Sussex Records.  His first album Just as I Am was released in 1971 with the songs, “Ain’t No Sunshine” and “Grandma’s Hands” as singles.  Of note, the album features Stephen Stills playing lead guitar – from Crosby, Stills & Nash fame.

After Sussex Records closed their doors, Withers signed with Columbia Records in 1975 and released 3 albums in consecutive years.  He also worked on side projects which included working with jazz saxophonist Grover Washington Jr. on “Just The Two of Us”.

Withers was elected into the Rock and Roll Hall of Fame in 1995. 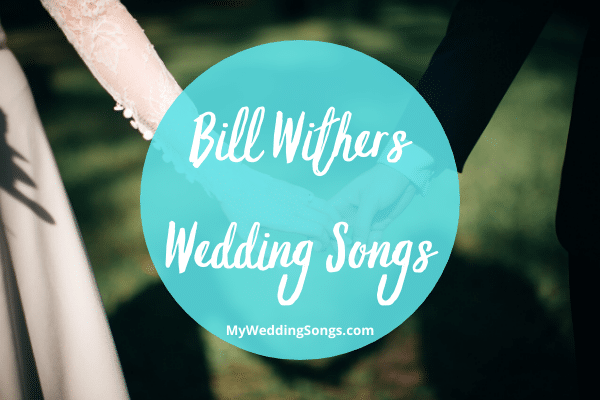 Not all of the songs on our list would be considered love songs.  We have done so because many of Withers’ songs are well-known and wedding guests will recognize them from his vast catalog of music.

Just the Two of Us
1981, Winelight
The song is recorded with Jazz artist Grover Washington Jr. The song represents how two people will conquer the world together. It is the perfect song if you have that type of relationship with a parent for a special dance.

You Got The Stuff
1978, ‘Bout Love
The last song on our list will bring Funk to your wedding dance floor and keep people dancing. A great party song to add to your wedding reception playlist.

Lovely Day
1977, Menagerie
“Love Day” should describe every wedding day. It makes for a perfect up-tempo song to play for the wedding processional or as guests are leaving the ceremony venue.

In the Name of Love
1975, Making Music
The song features Ralph MacDonald, an American percussionist. If you are looking for a jazzy smooth R&B song to play while guests are eating their meals, then this song makes for a great background song to play at your wedding reception.

When there ain’t no giving in the give and take of love
Put the blame on love, in the name of love

Sometimes A Song
1975, Making Music
Another song with Funk influences can keep guests in happy spirits during the cocktail hour.

Lean on Me
1972, Still Bill
“Lean On Me” was Withers’ only number-one single on the Billboard Hot 100. The song makes for a great Father-Daughter or Mother-Son dance song. It could also be used as an in-law dance song as well due to the song’s message.

Kissing My Love
1972, Still Bill
Bring a little Funk to your wedding playlist. Instead of playing the wedding standards to get the wedding couple to kiss from the clinking of the glasses, play this song instead.

Use Me
1972, Still Bill
“Use Me” peaked on the Billboard chart at #2. The song is very sexy and not you would want to play at every wedding but definitely one that many will know and sing along to.

Ain’t No Sunshine
1971, Just As I Am
“Ain’t No Sunshine” was the first big hit of Withers’ storied career. The song was ranked as the 23rd best song of 1971 by Billboard. The song is known for its 26 repeats of the phrase “I Know”. The song signifies that sometimes you miss things that weren’t particularly good for you.

Grandma’s Hands
1971, Just As I Am
Withers wrote “Grandma’s Hands” about his own relations with his Grandma. Lyrics include “Grandma’s hands picked me up each time I fell”. If you wish to dedicate a song to your Grandma at your wedding, this song would be a winner.

She’d say “Baby, Grandma understands
That you really love that man
Put yourself in Jesus hands”

Through the years, there have been many groups covering Bill Withers songs.  Here are 2 of my favorites.

Do you have a favorite Bill Withers Song? Please share your song below!