Skip to content
Home > Music Artists > Top 11 Coldplay Love Songs For Your Wedding
My Wedding Songs is a reader-supported website. As an Amazon Associate, we earn revenue from qualifying purchases. Purchases made through links on this page may earn us a commission but also support the artists.

Coldplay started in Britain in 1996. Since then, they have released many swoon-worthy and perfectly choreographed songs that hit the spot for wedding micro-moments.

Enjoy our list of 11 Coldplay love songs that could be used as a first dance song and a processional song. 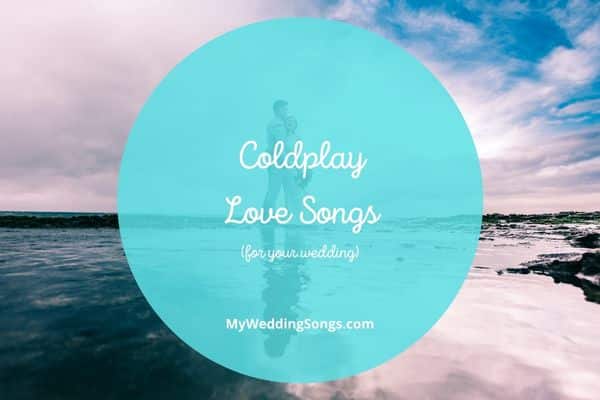 (with BTS)
Released in 2021 on the album Music Of The Spheres
A great song to play as a background song during cocktail hour or dinner.

And I (I) just want (just want) to put you first
And you (you), you are (you are) my universe
And you make my world light up inside

A Sky Full Of Stars

Released in 2014 on the album Ghost Stories
The song starts as a piano ballad but then turns into Coldplay’s first EDM hit. Makes a perfect dance song or recessional song.

Released in 2005 on the album X&Y
A message is a song for lovers who don’t have a fairytale love relationship. If you have gone through tough times and are better together, then this is a song to tell your story.

Us Against The World

Released in 2011 on the album Mylo Xyloto
A good song to show the oneness of the bride and groom. There are struggles in life outside of the relationship. It’s Us Against The World

Through chaos as it swirls
It’s us against the world

Released in 2002 on the album A Rush of Blood to the Head
The song speaks of a man’s desire for love… from his beautiful bride!!??

Looking for a more romantic instrumental version for your wedding?
Check out The Scientist by Vitamin String Quartet.

Always In My Head

Released in 2014 on the album Ghost Stories

This, I guess
Is to tell you you’re chosen out from the rest

Released in 2014 on the album This Is Where I Leave You (Soundtrack)
A great song for the processional – the song playing as the bride walks down the aisle.

Released in 2000 on the album Parachutes
A short song if you want to accentuate a quick wedding micro-moment with a song.

Next: Read a list of Journey’s top songs for classic rock fans.

I’ll be round
I’ll be loving you always
Always

Released in 2008 on the album Viva la Vida or Death and All His Friends
Viva La Vida is Spanish for “Love Live Life”. Viva La Vida is Coldplay’s only song to reach the Billboard Hot 100. Probably the most recognized Coldplay song for those that are not Coldplay followers.

Once you’d gone, there was never
Never an honest word
And that was when I ruled the world

Released in 2014 on the album Ghost Stories
It is about a couple who come together and fall apart. Not the perfect love song for weddings but it takes magic to bring them together.

Released in 2000 on the album Parachutes
Yellow makes for a great processional, recessional, or ceremony accent song.

Also, read a list of love songs by Dave Matthews Band for your Big Day.

Released in 2000 on the album Parachutes
A song to play for walking down the aisle.

(The Chainsmokers & Coldplay)
Released in 2017 on the album Memories…Do Not Open
A great mid-tempo song to play as a background song while quests are eating or during cocktail hour.