You are here: Home1 / Wedding Music Blog2 / Music Artists Playlists Articles3 / 13 Train Songs (The Band) To Play During Your Wedding 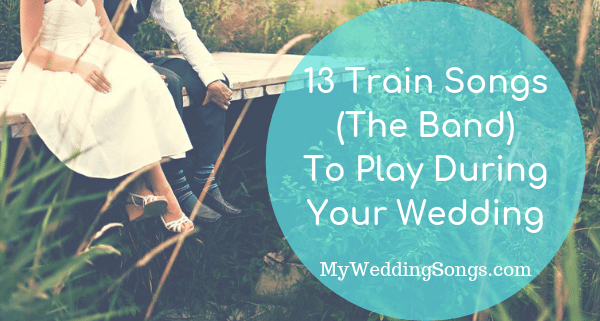 Train has amassed 14 Top 10 Billboard hits. The band’s first album was released in 1998 under their own name. Their first big hit, “Meet Virginia”, topped the Billboard Top 20. They never looked back. We assembled a list of some of their most popular songs that could highlight events at your wedding. Enjoy our list of 13 Train songs for weddings. 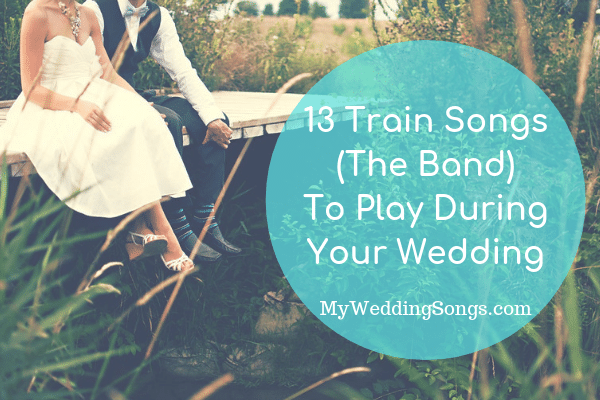 Just like Journey sang about their favorite “city by the bay”, so did Train in their videos and music including “Save Me, San Francisco”. Both are American bands originating from San Francisco. Of note, both bands have higher-pitched vocal frontmen of Steve Perry and Pat Monahan.

If you have a DJ at your wedding reception, the song lyrics fit perfectly into a cocktail or background song that will have everyone singing along and tapping their toes.

Angel in Blue Jeans
2014, Bulletproof Picasso
An underrated train song that just finds a way of making you happy and bopping your head. If you are having a wedding wearing jeans, this would fit the theme.

50 Ways To Say Goodbye
2012, California 37
Gotta love the inclusion of the mariachi band! This could be a fun and funny way to end your reception on the way out the door.

Drive By
2012, California 37
If you love Train’s music, this will be a must-play during dancing and will fill the dance floor.

I swear to you, I’ll be there for you
This is not a drive by
Just a shy guy, looking for a two-ply Hefty bag
To hold my love

Mermaid
2012, California 37
If you are looking for a unique song to play while the garter is being removed from the bride’s leg, check out this song.

So, wrap me up return to sender
Let’s forget this 5 year bender
Take me to my city by the Bay

If It’s Love
2010, Save Me, San Francisco
A great love song story that could accent the cake cutting or as a party song while guests are dancing.

Marry Me
2009, Save Me, San Francisco
You probably already guessed this song would be #1 on our list and you would be correct. “Marry Me” makes for the perfect bride or groom processional song. Actually, you could incorporate this song into any aspect of your wedding and I’m sure it would fit nicely into the playlist.

Hey, Soul Sister
2009, Save Me, San Francisco
This song is Train’s highest-ranked song on the Billboard Top 100 at 3rd place. In addition, it was the top-selling song on iTunes in 2010. We can even add this song to a list of songs featuring a ukelele.
The song makes for the perfect bridesmaid song!

Calling All Angels
2003, My Private Nation
Another song to remember loved one lost too soon. You could also include the song into a ceremony song calling angels to watch over you.

When I Look To The Sky
2003, My Private Nation
If you have a friend or family member that passed on, this is a great tribute song to remember lost loved ones.

Drops of Jupiter
2001, Drops of Jupiter
Another song to remember loved ones lost, particularly a Mother. This song could be a great parent dance with someone stepping for celebrating your Mother.

Tell me, did you fall for a shooting star?
One without a permanent scar
And did you miss me while you were
Looking for yourself?

Meet Virginia
1998, Train
A mid-tempo song that makes for a great cocktail hour that everyone will know and sing along to.

I hope you enjoyed our list of Train songs to play at your wedding. If you have a song not on our list, be sure to comment on it below. If you are looking for songs with the word train in the title, check out this list.