You are here: Home1 / Ceremony & Reception2 / 100 Best Father Son Songs for Your Wedding

Occasionally we take a tangent from the wedding-only song lists. There are several types of occasions that require a special song.

One of them is a wedding, yes. Others are for family celebrations and, sadly, funerals.

This article features our list of special songs between a son and his father. 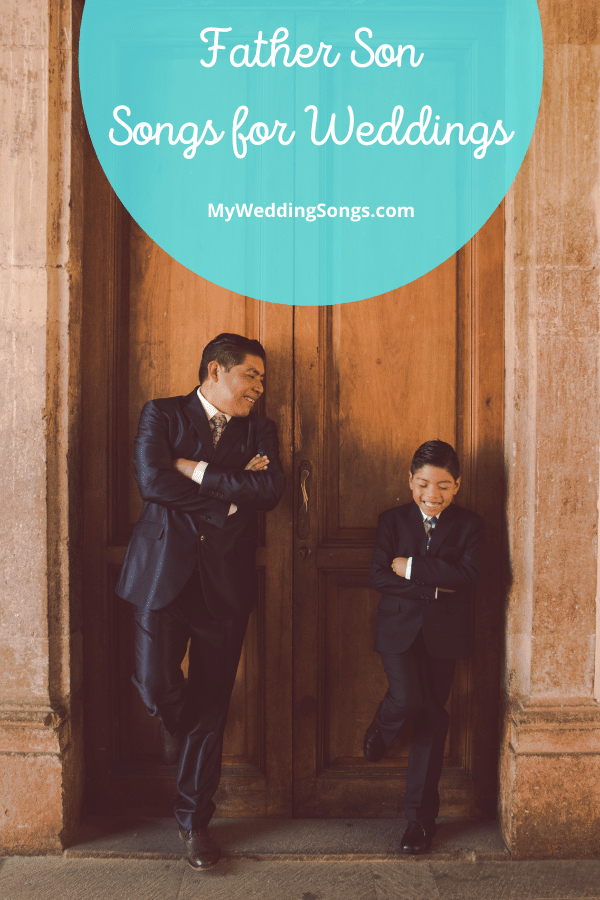 What Are Father-Son Songs?

Father-son songs are special when a groom wishes to dedicate a special song to his father at the wedding reception.

You can use this song in a slideshow or it can be included in the DJ’s playlist for your wedding reception. If you plan to surprise your father, be sure to talk about it with your partner and a professional wedding coordinator.

This wouldn’t necessarily be a dance song. Rather, suggest playing a song in the middle of the wedding reception that everyone can dance to, whether it be a fast or slow song.

Of course, if you and your father are dancers, feel free to create a choreographed routine and bring in the groomsmen or the groom’s siblings.

This can be especially meaningful if the father has a milestone birthday near the wedding date. Heck, it could be the other way around. Maybe it’s the father’s second wedding and his son is turning 25. It’s completely up to you.

We’ve talked to wedding couples through social groups and analyzed hundreds of wedding DJs’ playlists across the U.S. that provide reception music.

We selected a list just for you of the most popular and unique father son songs for your reception.

Every groom’s music tastes are different.

Thus, we selected father-son songs that include many different genres.

If you have a favorite Father-Son song that doesn’t appear on our list, please leave a comment below so we can add it.

I hope you know I love you young’n, like Father, like Son
My little man, your day is coming

I didn’t keep it simple
Chip on the shoulder, anger in my veins

Want to let you know I love you
Love you, if you didn’t know I feel this way

Though son, I still kinda wish I coulda been there when he was born at 3:01
Bygones be gone, there’s nowhere wrong and all

LIKE YOU – Aaron Cole, Tauren Wells, and TobyMac
2021, Christian

I Will Be Here – Steven Curtis Chapman
2003, Christian

Through the winning, losing and trying
We’ll be together

Out here learning on the fly
Trying to do the best I can
To raise him up right
No sir, yes, ma’am

Go to church, stay clear of that old devil
That’s what my daddy taught me
Before my feet could reach the pedals

My son please don’t make mistakes
And make, no don’t chase the things I’ve chased
Don’t waste your life on the run
My son, go ahead and spread your wings

All The Pussy You Will Slay – Wheeler Walker Jr.
2018, Country

In a few short years you’ll be ready to rock my son,
And boy you’ll have some fun

I know you will, ’cause you’re a part of me
And a part of you will always be my boy

You Should Be Here – Cole Swindell
2016, Country

You should be here, standing with your arm around me here
Cutting up, cracking a cold beer

The livin’, breathin’, reason that I am
A family man

A Father’s Love (The Only Way He Knew How) – Bucky Covington
2010, Country

But you’ll make it through this, and you’ll see
You’re still around to write this letter to me

Don’t blink, you just might miss
Your babies growing like mine did
Turning into moms and dads

My wish, for you, is that this life becomes all that you want it to
Your dreams stay big, your worries stay small
You never need to carry more than you can hold

We just have to believe things work out like they should
Life has no guarantees, but always loved by me
You’re gonna be

Let them be little, cause they’re only that way for a while
Give them hope, give them praise, give them love, everyday

Been crazy all day long
And it’s only Monday
Mr. Mom

He Gets That From Me – Reba McEntire
2003, Country

Little Boy, in a baseball hat
Stands in the field with his ball and bat

I Wish I Could Have Been There – John Anderson
1994, Country

It was a happy day, but kinda’ sad
And I wish they could have been there

He said daddies don’t just love their children every now and then
It’s a love without end, amen

Well, I knew that snake was my own sweet dad
From a worn-out picture that my mother had

Walk with me, show me the right direction

I’d play a song that would never ever end
‘Cause I’d love, love, love to dance with my father again

Every time I look at you I think man, a little me
Just like me, wait and see gonna be tall

I know you know the truth about it
I would be nothing, nothing without you

So I told Mama I was gonna quit school, but
She said that was Daddy’s strictest rule

I hope I am everything you wanted me to be

When You Need Me – Bruce Springsteen
2016, Rock

‘Cause without you, my life just wouldn’t be the same
If you want me come sunny skies or rain
When you need me, just call my name

But it was not your fault but mine
And it was your heart on the line
I really f***** it up this time
Didn’t I, my dear?

Whisper in my ear that I’m growing up to be a better man, dad

Bit by bit, I’ve realized
That he was here with me
And I looked into my father’s eyes

Father of mine
Tell me where did you go?

My life has been a poor attempt
To imitate the man

The monster’s gone, he’s on the run
And your daddy’s here

You look up at me
And somewhere in your mind, you see
A man I’ll never be

Carry on, my wayward son
There’ll be peace when you are done

Spread the word around
Guess who’s back in town

Well, I’ve been afraid of changin’
‘Cause I’ve built my life around you

And he was talking ‘fore I knew it, and as he grew
He’d say “I’m gonna be like you, dad”

The Captain and The Kid – Jimmy Buffett
1970, Rock

Tomorrow just a day away
For the captain and the kid

It’s not time to make a change (Away, away, away)
Just sit down, take it slowly

Once I was 11 years old, my daddy told me
Go get yourself a wife or you’ll be lonely

Find a girl, settle down, if you want you can marry
Look at me, I am old but I’m happy

If I could
I would try to shield your innocence from time
But the part of life I gave you isn’t mine.
I watched you grow
So I could let you go

If you want, you can marry
Look at me, I am old
But I’m happy

Joyful the sound, the word goes around
From father to son

And ev’ry one would say, “that’s his son”
and my heart would burst with pride

How Do You Choose a Father-Son Song?

Set some time aside to think about what your father means to you (or vice versa). List some of the qualities he has that are meaningful to you. Journal notes about some special memories. If you do this while listening to our Spotify playlist, we’re certain one will resonate with you.

We recommend that you choose a song that conveys a special meaning between the father and his son. Think of a song where the lyrics speak to you. If a special song doesn’t come to your mind right away, don’t worry. We have 70 of the Top Father-Son gongs to choose from here.

Other Occasions for Father-Son Songs

Father-Son songs aren’t just for your wedding reception. These sentimental songs can also be played to celebrate a milestone birthday, your Father’s retirement, or even Father’s Day. It is already a day to celebrate Fathers so why not dedicate a song to your father?

Fathers can also play the songs to celebrate the birth of their new baby boy, their graduation, or to commemorate special bonding days like a fishing trip.

21 responses to “100 Best Father Son Songs for Your Wedding”