Skip to content
Home > Music Artists > Top 10 Dave Matthews Band Love Songs For Your Wedding
My Wedding Songs is a reader-supported website. As an Amazon Associate, we earn revenue from qualifying purchases. Purchases made through links on this page may earn us a commission but also support the artists. 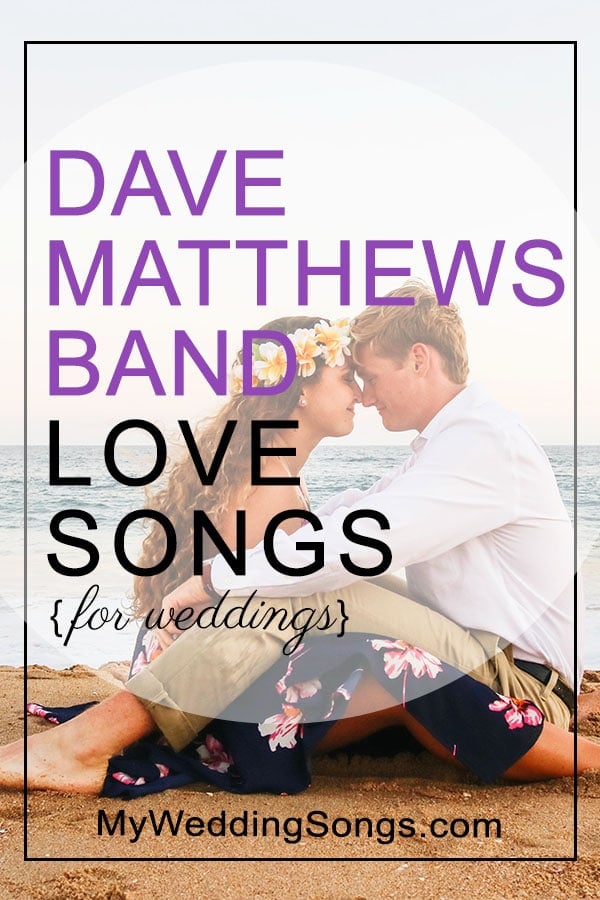 Dave Matthews Band is known for its unique rendition of songs at concerts. DMB is not known for one music style such as rock. They have infused many different music styles to make their own sound including rock, blues, funk, folk, and jazz.

#1 You & Me
Released in 2009 on the album Big Whiskey & the GrooGrux King
The best DMB love song for weddings. A very popular first dance song but you can play at any time in your wedding ceremony or reception.

“But right now it’s you and me forever girl, And you know we could do better than anything that we did, You know that you and me, we could do anything”

#2 Lover Lay Down
Released in 1999 on the album Live at Luther College
A beautiful love song you can play as a recessional song as it discusses taking each other’s hand.

#3 #34
Released in 1994 on the album Under the Table and Dreaming
Our favorite song to play as part of your wedding ceremony. Because the song is five minutes long, you could play as the groom’s processional or as a complete bridal party processional song for a small numbered party.

“You’re the love of my life, And the breath in my prayers, Take my hand lead me there, What I need is you here”

#5 Crush
Released in 1998 on the album Before These Crowded Streets
A mid-tempo song that you can play while cutting your wedding cake and cruching a pice of cake into your new spouse’s face.

“Crazy how you make it all alright love, You crush me with the things you do, I do for you anything too”

#6 Satellite
Released in 1995 on the album Under the Table and Dreaming
For die-hard DMB fans, this would play very well into the cocktail hour or as a background song while dinner is being served.
This is not a love song but does make a wedding song list for the true DMB fan for the raw emotion sung.

“Rest high above the clouds no restriction, Television we bounce round the world”

#7 Steady As We Go
Released in 2005 on live album Weekend on the Rocks
A very mellow and lovely song you could play as guests are arriving at the ceremony venue.

“I walk halfway around the world, Just to sit down by your side”

#8 Crash Into Me
Released in 1996 on album Crash
The topic is not the greatest wedding-friendly but is well-known that guest will sing along to.

Touch your lips just so I know, In your eyes, love, it glows so, I’m bare-boned and crazy for you

#9 American Baby
Released in 2005 on album Stand Up
A mid-tempo song that you can incororate into your wedding reception or while getting ready.

“But I’ve been walking for a thousand miles, One last time, I could see you smile”

#10 Stay (Wasting Time)
Released in 1998 on the album Before These Crowded Streets
A mid-tempo song you can add to your list of background songs to play during the wedding reception.

“Just wasting time, I was kissing you, You were kissing me love, From good day into a moonlight”

I am strong and wild
Like a storm out the stars in my blood
And it’s all because of you, you my love

Listen to our Dave Matthews Band songs playlist on Spotify.