Skip to content
Home > Music Artists > 13 Top Janet Jackson Love Songs and Dance Hits For Weddings
My Wedding Songs is a reader-supported website. As an Amazon Associate, we earn revenue from qualifying purchases. Purchases made through links on this page may earn us a commission but also support the artists.

Janet Jackson is known more than the sister of Michael Jackson. She created her own path into music history with 11 studio albums starting in 1982 and still releasing songs today.

Many Janet Jackson songs are either love songs or perfect dance hits that will fill the dance floor. Enjoy our list of both. 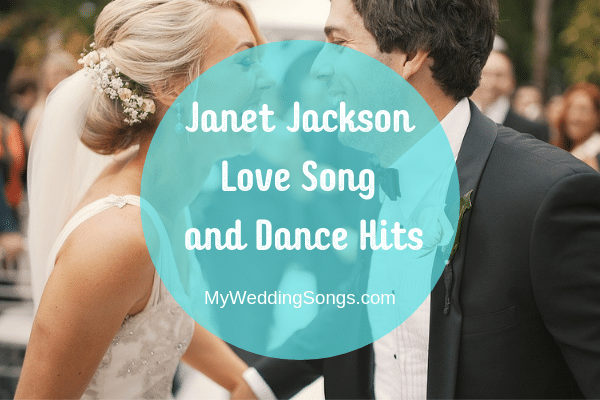 Made For Now
2018, Released as a single
Daddy Yankee with Janet is on our list with the newest song on our list.  It a great groove to add to any wedding playlist.

Look around
We’re made for now
Not tomorrow

All For You
2001, All for You
Janet was the queen of Pop for many years while producing chart-topping hits.  I love this song for a background song that is a bit more upbeat.

Together Again
1997, The Velvet Rope
If you have a great DJ who can mix well and remove the intro, this song can be mixed into any party dance set that keeps the dance floor packed.

Scream
1995, HIStory: Past, Present and Future, Book I
Joining with her brother Michael, this song was a huge dance hit bringing siblings together.  It will fill the dance floor with the guests wanting to dance.

That’s The Way Love Goes
1993, Janet
A well-known song for 90’s R&B fans will recognize instantaneously.  A great song as a background dinner song that everyone will tap their shoes to.

If
1993, Janet
Just like her brother, Michael Jackson. Janet produced fantastic dance hits and I love the song “If” to fill the dance floor for RB music fans.

Black Cat
1990, Janet Jackson’s Rhythm Nation 1814
The bride can be the one in control during the garter removal.  “Black Cat” empowers the bride to surprise her new husband with this song that she is the one in control.

Black cat, nine lives, short days, long nights
Living on the edge, not afraid to die
Heartbeat, real strong but not for long

Love Will Never Do (Without You)
1990, Janet Jackson’s Rhythm Nation 1814
A great mid-tempo song perfect for a non-traditional recessional song or a spot-on cocktail hour song!

Escapade
1990, Janet Jackson’s Rhythm Nation 1814
A throwback to the late 80s that will have everyone reminiscing and also on the dance floor.  One of Janet’s #1 biggest dance hits.

Let’s save our troubles for another day
Come go with me, we’ve got it made
Let me take you on an escapade

Miss You Much
1989, Janet Jackson’s Rhythm Nation 1814
If you are looking for a song that will get guests to the dance floor, this song will get people to want to get up and dance.

I’ll tell anyone whose heart can comprehend
Send it in a letter baby, tell you on the phone
I’m not the kinda girl who likes to be alone
I miss ya much

Rhythm Nation
1989, Janet Jackson’s Rhythm Nation 1814
Looking for an old school dance tune for a choreographed dance? This song rocked dance floors and made CDs skip.  If you practice, this song can bring down the house!

When I Think of You
1988, Control
One Of Janet’s love song dance hits.  However, we think the tempo is a bit slower for dancing and thus makes for a great background song or cake cutting song.

Nasty
1986, Control
Looking for a song that talks about how women should be treated?  “Nasty” makes for the perfect garter toss song.

What is a Janet Jackson song to avoid at your wedding? I would not play the song “Again”. With the lyrics -“I’ll never fall in love with you again”.

We didn’t go deep into Janet’s discography selecting the perfect love songs for weddings. If you have a song that fits this list, be sure to comment on it below. Our initial goal was to find songs that most wedding guests would know and dance to or sing along to. I hope you enjoyed our list of Janet Jackson songs perfect for weddings.