You are here: Home1 / Ceremony & Reception2 / Best Sister Songs For Bride and Sister(s)

Most sisters grow up close to one another — though they may have argued about bathroom time or stealing one another’s clothes (or boyfriends).

Sisters help one another in hard times and celebrate in good times.

Your sister is just as important to you now that you’re a bride, as she was during your childhood — maybe more. So, why not honor her?

What is a bride-sister song?

As a bride, you may want to offer a bride-sister song to dedicate to your sister and your special relationship. Your sister may want to do the same.

Bride-sister songs are songs that speak to the relationship between you and your sister or sisters.

Select a song that has special meaning between you as sisters. Our top 50 sister songs below should help jog your memory or inspire you to find one. 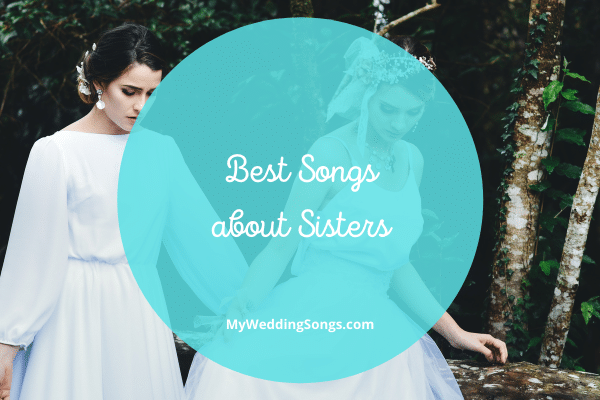 We’ve talked to wedding couples through social groups and analyzed hundreds of wedding DJs’ playlists across the U.S. that provide wedding music. We selected a list just for you of the most popular and unique sister songs for a special dance or dedication.

Every bride’s music tastes are different. Thus, we selected sister songs that include many different genres.

Our Top 10 Sister Songs for Brides

Special Sister Songs for Sisters and About Sisters

Without further ado, here is our curated list of the best bride-sister songs. Don’t worry, they’re not all tear-jerkers like “Wind Beneath My Wings.” We also have “This Girl is on Fire” and “Bad Girls.”

Dear sister can you help me lie?
I’ve told the truth so many years
And no one seems to want to hear it

Sister, I hear you laugh
My heart fills full up
Keep me please

Hey, soul sister
Ain’t that Mr. Mister on the radio, stereo
The way you move ain’t fair, you know

There were never such devoted sisters
Never had to have a chaperon, no sir
I’m here to keep my eye on her

It’s not always easy and sometimes life can be deceiving
I’ll tell you one thing, it’s always better when we’re together

It’s like you’re always stuck in second gear
When it hasn’t been your day, your week, your month
Or even your year, but
I’ll be there for you

Well, I keep on thinkin’ ’bout you, sister golden hair surprise
And I just can’t live without you, can’t you see it in my eyes?

Oh, sister, when I come to knock on your door
Don’t turn away, you’ll create sorrow

Oh but to be,
I’d like to be
My older sister

That my best friend, she a real bad b****
Got her own money, she ‘on’t need no n**’
On the dance floor, she had two, three drinks
Now she twerkin’, she throw it out and come back in

I pray one day you’ll have a home, with arms stood open wide
And you’ll have someone who loves you, always by your side
And if you lose your will to try, I wish you wings to fly

You’re so provocative, I’m so conservative
And you’re so adventurous, I’m so very cautious, combining
You think we wouldn’t
We do, but we do-do-do-do

Got my head on straight, I got my vibe right
I ain’t gonna let you kill it
You see I wouldn’t change my life, my life’s just
Fine

And all my women, all my women sitting here trying
To come home before the sun
And all my sisters
Coming together
Say yes I will
Yes I can

So what do we do girls, shout out loud
Lettin ’em know were gonna stand our ground

Don’t need no hateration
Holleration in this dancery
Let’s get it percolatin’, while you’re waitin’
So just dance for me

In your time of need, you can lean on me
Come on, I’ll be there for you

Life never tells us, to wish you well
You’ll find your point when
You will exhale

What about your friends?
Will they stand their ground?
Will they let you down? hey yay

Oh, sister
Don’t put me on the street again
Oh, sister
I just want to be your friend

And when we grow up, do you think we’ll see
That I’m still like you and you’re still like me
I might be pretty; you might grow tall
But we don’t have to change at all

Without you here, I am boring
Something inside you is triggering
It makes me myself

You can count on me like one, two, three
I’ll be there

Pretty pretty please, if you ever, ever feel like you’re nothing
You’re fuckin’ perfect to me!

Anything You Can Do – by Bernadette Peters & Tom Wopat
2008, Pop

Anything you can be, I can be greater
Sooner or later I’m greater than you
(No, you’re not) yes, I am

I don’t know how you keep on giving
For your kindness, I’m in debt to you
And I never could have come this far without you

Sisters Are Doin’ It For Themselves – Aretha Franklin & Eurythmics
1985, Pop

Mothers, daughters
And their daughters too
Woman to woman
We’re singin’ with you

Are there brother and sister songs?

When You Need It – Tenille Townes, Wrabel
2022, Masquerades

Yeah, you’re my sister
I got your back on the long drunk stumble home
Sister, I’ll be your “Hell yeah!” when all you ever heard was “No”

Sister, oh, sister
The whole house in shambles
You stood straight as a bean
You made a whole team
Out of me and you

Good Friend And A Glass Of Wine – LeAnn Rimes
2007, Country

I’d be happy to have a happy hour
When I’m tired and I’m fried it gets me right back on my feet
Any kind of red or white, a little sister time

And while you’re out there getting where you’re getting to
I hope you know somebody loves you, and wants the same things too
Yeah, this, is my wish

Whenever You Remember – Carrie Underwood
2005, Country

When all this world was there for us
And we believed that we could touch the sky
Whenever you remember, I’ll be there

I remember how we’d fight
And make up and laugh all night
Wish we were kids again
My sister, my friend

This One’s For The Girls – Martina McBride
2003, Country

Sister (I’d Choose You For My Friend) – Valerie DeLaCruz
1998, Country

Pure as gold, rare as a gem
If you weren’t my sister, I’d choose you for my friend

Sisters – Sweethearts Of The Rodeo
1991, Country

Together we will find
That this will stand the test of time
More than sisters, best of friends

Baby sister, what a waste to see you in this place
I lose my mind from worrying over you

Racing through the streets till we fly
Gold-colored prisms alive (the light, the light)
Headstrong tonight

Lost Without You – Freya Ridings
2017, indie

Everywhere I go
I can see your face
Alive and gone at once
Hey, that’s the way I see this place

You Are My Sister – by Antony And The Johnsons
2005, Indie

There’s money in this world to be made my sister
Yet, you’re sittin’ there cryin’ over a broke n****
He ripped your heart out, he left a hole in you

My sister
We sho’ ain’t got a whole lot of time
So shake your shimmy,
Sister
‘Cause honey the ‘shug
is feelin’ fine

What is a good song to dedicate to your little sister?

What song should I dedicate to my older sister?

A good song celebrates your older sister as someone you trust, love, and a true friend. Good older sister songs include “Older Sister” by Carly Simon and “My Sister” by Reba McEntire.

How can I include my sister or the sister of the groom in the wedding?

The best way to honor your sister or the groom’s sister is to have her part of the wedding party as a bridesmaid or groomswoman. Depending on her age, you could also have her as the flower girl. Another option is to have per perform a ceremony reading.

When do we play the bride-sister song?

We recommend playing the song during the wedding reception so that everyone can participate in dancing to the song. But, if your sister is a musician, she might have written you a special song to play during the ceremony. We’ve seen a lot of talent in our days.

If you’d like to keep the moment private between you (as the bride) and your sister, play it during your wedding photos. Or while she is helping you with your gown. It makes a great photo opportunity.

What if I don’t have a sister?

Maybe you didn’t grow up with a sister. You could feel left out. Or your sister is estranged from you. Family estrangement seems to be on the trend, sadly. As with blended families. On the other hand, you may have discovered a long-lost sister, a half-sister, or you really bonded with your step-sister. Include them in your wedding celebration, by all means.

Your aunt may be very close to your age and filled that role in your life. And don’t forget about the besties. Sometimes childhood friends are closer than sisters. But be advised, that people have expectations during weddings that closely align with bloodlines than we would like to think. So, if you decide to include a sister song for a non-traditional role, talk about it with your spouse and wedding coordinator.

Sisters gather to sing songs with and for the bride to go back to Punjabi culture. Singing jokes about your in-laws sound like a great way to start pre-wedding festivities and shake off some stress. This practice is part of the pre-ceremony festivities and, according to Lin & Jirsa, happens in the bride’s home or banquet hall.

Westerners could definitely take this tradition and incorporate it into their wedding receptions, especially as a group song with the bride, her sisters, and new sisters-in-law. The DJ could play the karaoke track or the sisters could all dance and sing along. Talk to your professional wedding planner and DJ for their advice on how this could be a fun part of your wedding. It would definitely make memories!

Don’t forget about National Sisters Day, too. National Sisters Day is celebrated every year on the first Sunday in August. So, if that is the day of your wedding, it would be extra special to honor your sister. If your sister passed away, you may want to honor her or avoid this day. It really depends on you and your future husband.

If you have a sister song we should add to the list, please do comment on it below.

20 responses to “Best Sister Songs For Bride and Sister(s)”