Top 60 Sister Brother Songs For A Dance Or Dedication (2022)

Updated on June 8, 2022 | Written by Matthew Campbell (Editor of My Wedding Songs and veteran DJ)

Did your big brother make a big impact on your life? Maybe he was your protector. He might even be your twin. Your childhood is full of memories together and you want to honor your relationship.

Choosing a sister-brother song at your wedding honors a lifetime of memories.

What is a sister-brother song during a wedding?

A sister-brother song is a special song between a bride and her brother.

We recommend that you select a song that has special meaning between both you and your brother.

This could be a sister-brother dance, a slideshow, or when he walks down the aisle. It all depends on what you would like to do as the wedding couple. 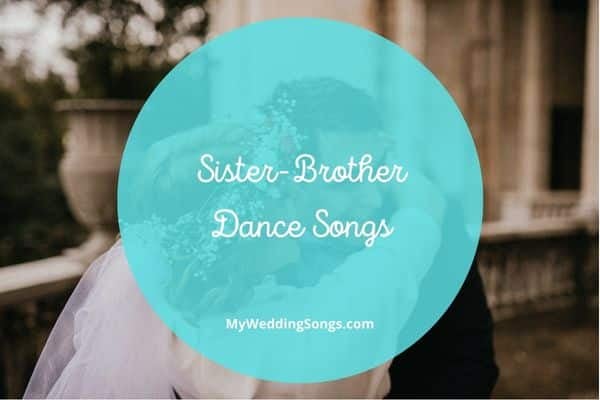 You will enjoy a list of the most popular and unique sister brother songs for a special dance or dedication.

Every couple’s music tastes are different. Thus, we selected sister brother songs that include many different eras and music styles.

Are there brother and sister songs? Of course. Here is a list of our favorite sister brother songs.

If a special song is not known between the bride and her brother, we suggest our top sister brother songs below.

Brother brother, sister sister
Mother father, how I love you

Sister to a Brother – Rob Finlay

My Brother Taught Me How to Swim – Passion Pit

I’m talking to my brothers and sisters
I miss the conversations between us
There’s nothing wrong with being a dreamer
So where are you now?

Sister, I hear you laugh
My heart fills full up
Keep me please

I like my big sister
But I don’t wanna wear her coat
Maybe black, it may fit perfect
But you and I both know, it’s a girls coat

You take the home from the boy
But not the boy from his home
These are my streets, the only life I’ve ever known
Who says you can’t go home?

Yes, no, maybe
I don’t know
Can you repeat the question?
You’re not the boss of me now

We Are Going to Be Friends – White Stripes

Tonight I’ll dream, while I’m in bed
When silly thoughts go through my head
About the bugs and alphabet
And when I wake tomorrow, I’ll bet
That you and I will walk together again

Brothers and sisters unite
It’s the time of your lives

You’ll Be In My Heart – Phil Collins

Yes, you’ll be in my heart
From this day on
Now and forever more

I’ll Be There for You – The Rembrandts

I hate my sister, she’s such a bitch
She acts as if she doesn’t even know that I exist
But I would do anything to let her know I care

Hey there Mr. Blue
We’re so pleased to be with you
Look around see what you do
Everybody smiles at you

Oh, sister, when I come to knock on your door
Don’t turn away, you’ll create sorrow
Time is an ocean but it ends at the shore
You may not see me tomorrow

Oh, you’re the best friend that I ever had
I’ve been with you such a long time
You’re my sunshine and I want you to know
That my feelings are true
I really love you

You’ve Got A Friend – James Taylor

Into the Mystic – Van Morrison

He Ain’t Heavy, He’s My Brother The Hollies

For I know
He would not encumber me
He ain’t heavy, he’s my brother

In My Life – The Beatles

If you want to celebrate a love between sisters, see our list of sister songs (songs for and about sisters).

Get the best out of life, treat yourself to something new
Keep your head up high
In yourself, believe in you, believe in me

It Don’t Have to Change – John Legend feat. The Stephens Family

Friends may come, and friends may go
But you should know that
That I’ve got your back, it’s automatic

Oh, sister
Don’t put me on the street again
Oh, sister
I just want to be your friend

When We Grow Up – Diana Ross

When we grow up, will I be pretty?
Will you be big and strong?
Will I wear dresses that show off my knees?
Will you wear trousers twice as long?

Lean On Me – Bill Withers

And tell me friend, how in the world have you been?
Tell me, what’s out and I want to know what’s in
What’s the deal man
What’s happening? Tell me brother

Stand By Me – Ben E King

If you want to celebrate a love between brothers, see our list of brother songs (songs for and about brothers).

Count On Me – Bruno Mars

You can count on me like one, two, three
I’ll be there

Have It All – Jason Mraz

You don’t need money, you got a free pass
Here’s to the fact that I’ll be sad without you
I want you to have it all

There’s a song in my heart, I feel like I belong
It’s a better place since you came along

Now maybe I shouldn’t yell
’cause I know you’re just a kid
But I can’t always tell
What’s on your mind, half of the time, brother mine

I Learned From You – Miley Cyrus and Billy Ray Cyrus

Sister Moon, will be my guide
In your blue, blue shadows, I would hide
All good people, asleep tonight

Oh but to be,
I’d like to be,
Just once to be
My older sister

Come On Get Happy – Partridge Family

What A Wonderful World – Louis Armstrong

I see trees of green, red roses too
I see them bloom for me and you
And I think to myself
What a wonderful world

If you have stepparents, see our list of stepmom songs and stepdad songs.

When You Need It – Tenille Townes feat. Wrabel

Sister, oh, sister
The whole house in shambles
You stood straight as a bean
You made a whole team
Out of me and you

And while you’re out there getting where you’re getting to
I hope you know somebody loves you, and wants the same things too
Yeah, this, is my wish

And tell Meemaw that I miss her
Yeah, I should give her a call
And make sure you tell Daddy
That I’m still his little girl

Whenever You Remember – Carrie Underwood

When all this world was there for us
We believed that we could touch the sky
Whenever you remember, I’ll be there

I remember how we’d fight
And make up and laugh all night
Wish we were kids again
My sister, my friend

You’ve Got A Friend in Me – Randy Newman

Through The Years – Kenny Rogers

You can have a dance with your wedding party to start the dancing at your reception.

We were just kids
We had each other, you’re still with me
‘Cause you had my back, I had your back
You carry me

All My Life – Flo Rida

Over the Rainbow – Israel Kamakawiwo’ole

Someday we’ll find it
The Rainbow Connection
The lovers, the dreamers and me

We Are Family – Sister Sledge

We are family (hey, y’all)
I got all my sisters with me
We are family
Get up everybody and sing (sing it to me)

Oh, sister, am I not a brother to you
And one deserving of affection
And is our purpose not the same on this earth
To love and follow his direction

How do I include my brother at my wedding?

Maybe your brother doesn’t want to dance. That’s okay, too. You can include your brother in your wedding party. Many wedding couples are breaking traditional gender roles such as bridesmaids and groomsmen. So your brother can definitely be the bride’s best man.

If your brother is shy, he can be an usher or officiant. Talk to your wedding coordinator and future husband. You don’t want surprises, though, on the day of.

What song can I dedicate to my brother?

What is a song about siblings?

Some of the best songs about siblings include “Brothers & Sisters” by Coldplay, “My Sister” by Reba McEntire, and “He Ain’t Heavy, He’s My Brother” by The Hollies.

Sister-brother songs are special when the bride has a special relationship with her brother. In addition, if a bride’s parents have passed away, it would be a special gesture to have a sister-brother dance to replace the father-daughter dance. If the bride has multiple brothers, the selected song can play as the bride starts dancing with the oldest brother. Then, the younger brothers can cut in as the song plays.

Can your brother be your bridesmaid?

There is no official wedding rule saying your bridesmaids or wedding party members actually have to be men or women! Instead, nominate your brothers or siblings who aren’t women as bridesmen or bridal party members. The same goes for groomswomen!

Remember, this is your celebration. Talk about the options with each other and be happy with your decisions.

Should the bride’s brother be a groomsman?

Talk with your bride-to-be to see how important it is to her that you include her brother as a groomsman. If it would mean a great deal to her, or if she’s including your sister in her bridal party, it’s probably worth honoring her brother with the title of groomsman. If it is not important to her, you could always include him as an usher.

Do siblings walk down the aisle?

Here is a song that was sung by a sister to her brother at his wedding:

As a bonus, here is a Sangeet brother-sister song: