We have created a list of our favorite best Oldies songs for weddings. My Wedding Songs does The Father Daughter Dance or the Dad Bride Dance is formally the dance between the father(s) of the bride and the bride herself. The bride should choose one of her favorite melodies to act as the father daughter songs. There are many father-daughter wedding songs to choose from. Brides,

if you have more than one father in your life, one can tap the other on the shoulder in the middle of the dance so you can dance with both of them.

Or, choose two father-daughter wedding songs and reserve a special dance for each of your fathers. That way you can choose a song for each man, that will fit his personality and be representative of your relationship – your father-in-law song or step-father song. 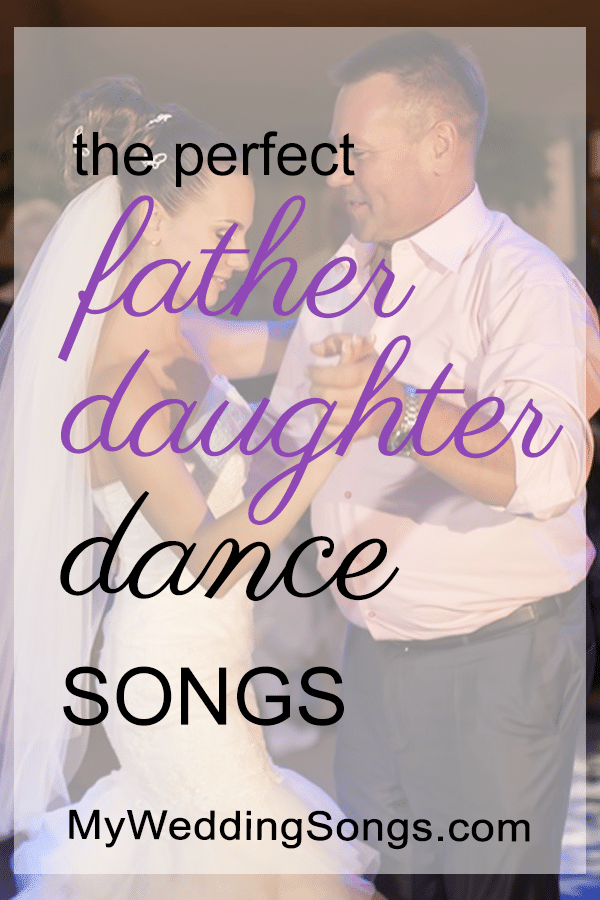 Interesting fact: The only song performed by a father daughter combo to chart as a Top 10 song on Billboard is Frank Sinatra and Nancy Sinatra’s Somethin’ Stupid (Album Version)

If you do not have a father, a common substitute is a father figure or even your brother would make a very nice gesture. Then, you can have a special brother bride song. Some bridal couples combine the father-daughter dance with the mother groom dance into just one song to dance.

In this case, a bride and groom should agree on a song that is memorable to everyone involved. There are plenty of songs that are ambiguous enough to allow for both the bride and the groom to dance with their parental figures.

The songs aren’t required to be about a daddy giving away his little girl. They don’t even have to be about a father or a daughter! They can simply be songs about love, dedication, or even something silly.

A lot of people choose funny songs instead of serious father daughter songs, to give the dance a light-hearted feel. Many fathers and daughters would rather do something fun than something serious.

And if you can’t decide on what song to use, you can always choose an instrumental number such as a jazz tune, classical waltz or contemporary dance music. The most important thing is to not rush your decision. You can even discuss it with your father or the man you will dance with if you like, but it is often more fun to make it a surprise and see his reaction as to which one of the father-daughter songs you chose. We cannot name all the great father-daughter songs.

Dad and daughter songs can also be commonly used as dedication songs and create a special bond between each other. A dad can dedicate a song to his daughter for events like her birth, special birthday like sweet sixteen birthday, teaching her how to dance as a little girl and also as a dad’s dedication to his daughter at her wedding event.

Daughters can also dedicate songs to her dad in special moments such as at her wedding, his retirement party, and special dances at school events. Daughters can dedicate some of the above songs for not only dads but also those who have filled the role like the song “He Didn’t Have To Be” by Brad Paisley.

Another need for Dad and daughter songs is for the special Daddy Daughter dance at schools. The night usually includes dinner too. It is a time for your Dad to take his best suit to the dry cleaners. Your Dad can also take you shopping for a new dress to wear for the Daddy Daughter date night.

101 Father Daughter Songs To Dance To

Listen to our father-daughter dance playlist on Spotify.