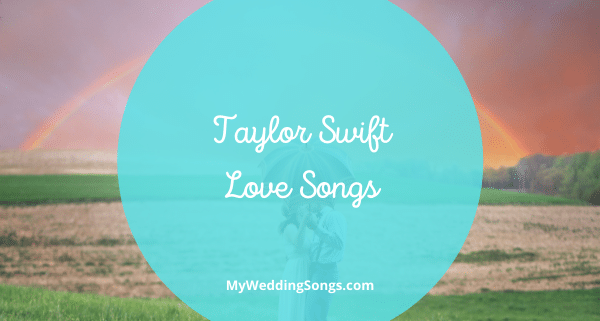 Taylor Swift started in the music industry in 2006 with her self-titled debut album.

In 10 short years, Taylor has become a worldwide superstar in both country and pop genres.

She has been a crossover sensation that few have accomplished. 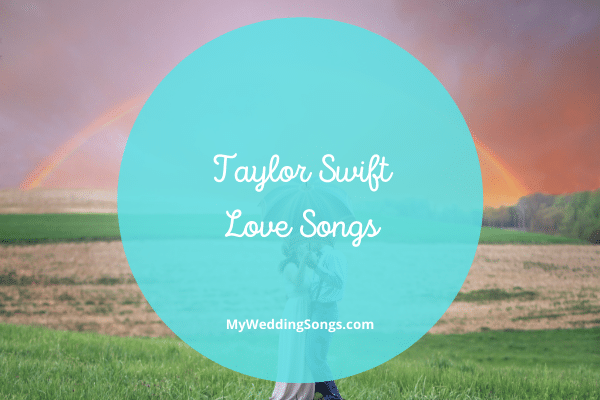 While only releasing five albums as a singer/songwriter, she can claim rights to all of her song lyrics

Taylor does portray her real life in her music. Yes, some of the songs are very romantic and perfect for weddings. Below is a list of our top 11 Taylor Swift romantic love songs.

The Joker and the Queen

(Ed Sheeran featuring Taylor Swift)
Released in 2022 on the album =

Released in 2020 on the album evermore

Released in 2019 on the album Lover

Taylor also released a remix of the song “Lover” which is perfect as a first dance song!
Lover (First Dance Remix)

Released in 2017 on the album reputation

Out Of The Woods

“When we decided, To move the furniture so we could dance, Baby, like we stood a chance, Two paper airplanes flying”

(with Ed Sheeran)
Released in 2013 on the album Red

“And your eyes look like coming home, All I know is a simple name, Everything has changed”

“And we were dancing, dancing Like we’re made of starlight”

Next: See a list of Katy Perry’s love songs and party songs for weddings.

Released in 2011 on the album Speak Now

“The stakes are high, the water’s rough, But this love is ours”

Released in 2011 on the album Speak Now

“Kiss me on the sidewalk, Take away the pain, ‘Cause I see, sparks fly, whenever you smile”

Released in 2010 on the album Speak Now

“You made a rebel of a careless man’s careful daughter, You are the best thing, that’s ever been mine”

Released in 2010 on the album Speak Now

Two Is Better Than One

“Baby, I’m never gonna leave you, Say that you wanna be with me too, Cuz I’ma stay through it all so jump then fall”

You Belong With Me

Released in 2009 on the album Fearless

“If you can see that I’m the one who understands you, Been here all along so why can’t you see, You belong with me”

Also, see a list of Ariana Grande’s love songs to add to your wedding day playlist.

The Way I Loved You

“It’s a roller coaster kinda rush, And I never knew I could feel that much, And that’s the way I loved you”

I’m Only Me When I’m With You

“Well, you drive me crazy half the time, The other half I’m only trying, To let you know that what I feel is true, And I’m only me when I’m with you”

Released in 2006 on the album Taylor Swift

“Take me back to the time when we walked down the aisle, Our whole town came and our mamas cried, You said I do and I did too”

Taylor was born in 1989 (also the name of one of her albums) and has a long music career and life story through songs ahead of her.

If we were going to choose one song from Taylor Swift’s discography to be her best love song, “Lover” would be at the top of the list. A close second is “Two Is Better Than One” with Boys Like Girls.

Does Taylor Swift have any ballads?

Some of Taylor Swift’s most popular ballads include “Lover”, “This Love”, “The Joker and the Queen” with Ed Sheeran, “The Moment I Knew”, “Last Kiss”, “All Too Well”, “Come Back…Be Here”, “Sad Beautiful Tragic”, and “Enchanted”.

What is Taylor Swift’s biggest song?

Taylor Swift’s most-watched song video on YouTube is “Shake It Off” with “Blank Space” a close second. Swift’s most-streamed song on Spotify is “I Don’t Wanna Live Forever” with Zayn on the album Fifty Shades Darker soundtrack.