You are here: Home1 / Music & Songs2 / Music Artists3 / David Bowie Wedding Songs As You Be My Wife 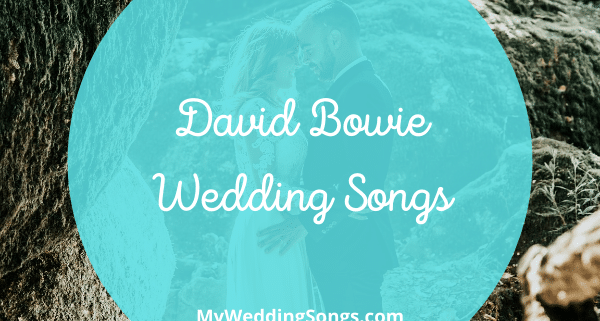 David Bowie is a music icon. There are few musical stars who influenced more careers. Here is a closer look at David Bowie and his top wedding and love songs.

David Bowie was born David Robert Jones in 1947. The native of London began his professional musical career in 1963, and Bowie quickly became known for his songwriting ability. Bowie cracked the UK music charts for the first time in 1969. The song “Space Oddity” would go on to make Bowie an international superstar.

Bowie also became an actor with appearances in films such as Labyrinth and The Prestige. Many of his roles involved playing important characters from histories such as Nikola Tesla and Pontius Pilate. Bowie continued performing and making music until his death in 2016 at the age of 69.

David Bowie inspired countless musicians and songwriters with a career that spanned an amazing six decades. Bowie was inducted into the Rock and Roll Hall of Fame in 1996. 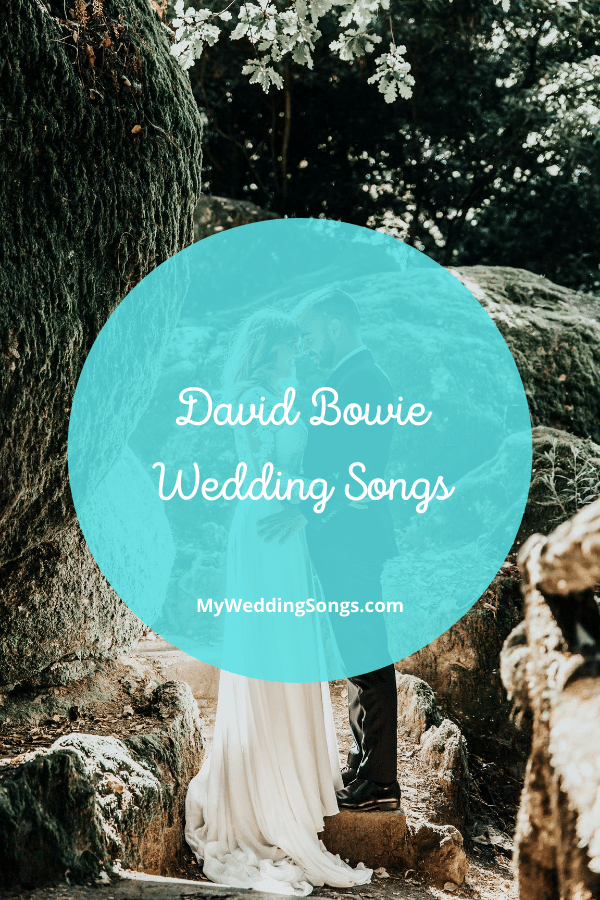 David Bowie released many wedding songs and love songs during his storied career. The selections range from poignant ballads to energetic dance music. Newlyweds of all ages will find something on this list that conveys the love they feel for one another.

Our list of the top wedding songs by David Bowie includes ballads and dance music that can make your wedding day a memorable event.

The Wedding Song
1993, Black Tie White Noise
David Bowie might not be the first musical artist to come to mind when considering wedding music, but this song from the 1993 album Black Tie White Noise has a meaningful message for newlyweds. Most couples will want to have this song woven into the formal wedding ceremony, generally as in interlude that precedes the vows.

Heaven is smiling down, heaven’s girl in a wedding gown
I never gonna be so good
Just like a good brochure
I’m gonna change my way
Angel for love

Absolute Beginners
1986, Absolute Beginners
There is a certain aspect of getting married that is a new beginning, one where couples leave their old lives behind to begin a new one with each other. That is the message of this David Bowie song, a ballad that you can use in many ways on your wedding day.

Within You
1986, Labyrinth Soundtrack
David Bowie contributed this song to the soundtrack for the 1986 film, Labyrinth, and it has become something of a cult classic. Couples that have a fondness for pop culture can include the song in their wedding to honor their love of the film, and it will bring a smile to many revelers at the reception.

Yes I do
Live without the sunlight
Love without your heartbeat
I, I can’t live within you

China Girl
1983, Let’s Dance
Everyone was singing this David Bowie song in 1983, and the song proved to be one of Bowie’s most commercial successes while winning multiple awards. The pure fun of this dance number will get everyone on their feet at the wedding reception, so save it for the middle of the party to raise the energy.

Wake up mornings where’s my, little China girl
I hear her heart’s beating, loud as thunder

Without You
1983, Let’s Dance
Every wedding should have song choices that are meant to convey the love of two people for one another, and also the commitment which they will soon embrace. This is a song that will let your new spouse know how important they are to your life, and it is a good choice for the first dance.

Be My Wife
1977, Low
Those couples who want something straightforward from David Bowie might want to include this song in their wedding festivities. It can be played just before the bride makes her entrance into the wedding chapel, but it can also be used as an alternative processional.

Heroes
1977, “Heroes”
A great combined parent dance song for the wedding couple and their parent.

Wild Is The Wind
1976, Station to Station
This song was among the few cover songs Bowie did in his long career, and it remains a favorite of Bowie’s adoring fans. You can have this song played as your wedding guests are taking up their seats in the chapel, and it also makes for a nice interlude as the wedding cake is being cut and served.

Can You Hear Me?
1975, Young Americans
This haunting ballad was originally released by Bowie in 1974, but the song was so popular that it also was included in Bowie albums in 1975 and 2016. The song retains a modern appeal, and it has a heartfelt expression of love and longing that is perfect on your wedding day.

I want love so badly, I want you most of all
You know it’s harder to take it from anyone
It’s harder to fall
Can you hear me call

Lady Grinning Soul
1973, Aladdin Sane
Weddings should really be mostly about the bride, and this David Bowie song from 1973 is a quirky way to celebrate everything about her that is unique and special. Many brides have it played at the wedding reception so that they can share a special dance with their bridal party.

She’ll come, she’ll go
She’ll lay belief on you
But she won’t stake her life on you
How can life become her point of view

Lady Stardust
1972, The Rise and Fall of Ziggy Stardust and the Spiders from Mars
Couples who appreciate the music of David Bowie are probably individuals who celebrate their unique personalities, and this song gives the newlyweds an opportunity to let individuality shine. It can be used to great effect to introduce the couple for the first time as husband and wife.

Soul Love
1972, The Rise and Fall of Ziggy Stardust and the Spiders from Mars
This is one of the songs that defines David Bowie’s Ziggy Stardust stage of the 1970s, and it resonates with a theme of eternal love and devotion. Songs like this one from the catalog of David Bowie are generally reserved for use on the wedding reception playlist.

Fill Your Heart
1971, Hunky Dory
David Bowie sings of the importance of recognizing and seizing true love in this song from his early career, and that is a theme all newlyweds can relate to. This song is a reminder to appreciate true love and cling to it with all the depth of one’s soul.

Changes
1971, Hunky Dory
“Changes” was released in 1971 and comes from the album Hunky Dory, a critically-acclaimed example of Bowie’s lyrical brilliance. The song celebrates growth and evolution, and it has been used by some brides for a father-daughter dance at the wedding reception.

In the Heat of the Morning
1970, The World of David Bowie
This song differs from other love songs released by David Bowie, and it has a pop sound that makes it a good dance selection. The sultry nature of the lyrics makes the song one that could set a good tone for the send-off at the end of the wedding celebration.

An Occasional Dream
1969, David Bowie
This was one of the early hits by David Bowie, but the 1969 release still has relevance today for modern couples. The lyrics are deep and reflective, typical of Bowie’s early work, and suitable for the sentimental portions of a wedding celebration.

It was long, long ago
And I can’t touch your name
For the days of fater were strong for you
Danced you far from me

If you have a favorite David Bowie song, not on our list, please share the song below so that we can add it!