Skip to content
Home > Music Artists > Bon Jovi Love Songs For Weddings – Top 10 Song List
My Wedding Songs is a reader-supported website. As an Amazon Associate, we earn revenue from qualifying purchases. Purchases made through links on this page may earn us a commission but also support the artists.

Bon Jovi is an American (New Jersey) rock band. Their first album was released in 1984 under the title Bon Jovi. Their stardom has spanned four decades with hits in each of them.

Bon Jovi was inducted into the Rock and Roll Hall of Fame in 2018. 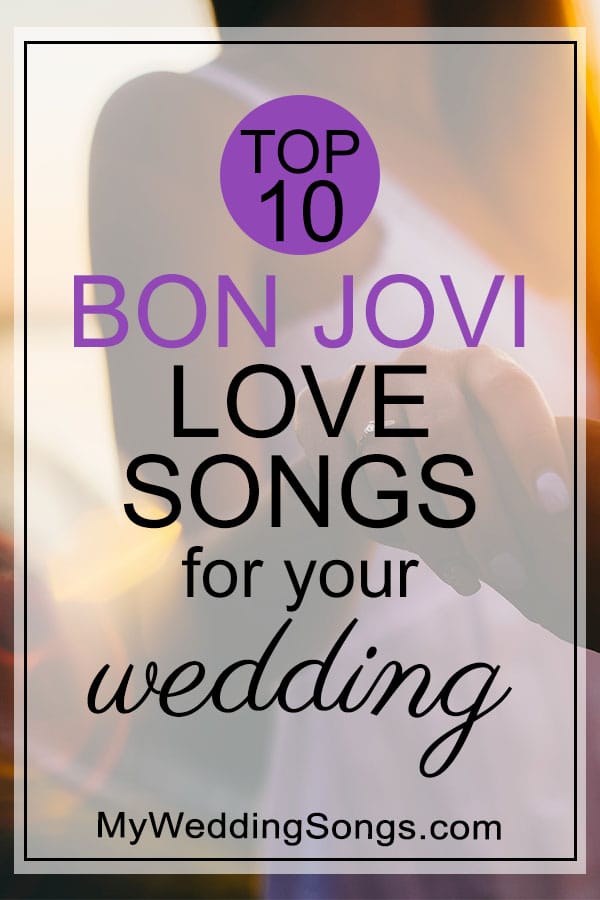 While performing in the 80s, they were categorized as an 80s hair band. However, their power ballads soared them to the top.

Their love songs have been played through the decades at high school proms and weddings. All of the Bon Jovi songs listed below are wedding-appropriate and perfect for weddings.

You may notice the songs “Bad Medicine” and “You Give Love A Bad Name”. If these songs mean lots to you, then, by all means, go ahead and play them at your wedding.

For the rest of us, these songs will leave a bad taste in our mouths. Bad Medicine and You Give Love A Bad Name do not really tell the story of a love story song appropriate for a wedding.

#1 Always
Released in 1994 on album Cross Road
A fantastic first dance song or an anniversary dance song for 90s couples!

“I will love you baby, Always and I’ll be there, Forever and a day, Always”

#2 Livin’ On A Prayer
Released 1986 on album Slippery When Wet
One of the best Rock party songs of all-time!

“It doesn’t make a difference if we make it or not, We’ve got each other and that’s a lot for love, We’ll give it a shot”

#4 Wanted Dead Or Alive
Released in 1987 on album Slippery When Wet
Not really a love song but a well-known song great as a wedding entrance or last dance song for Bon Jovi lovers. The acoustic beginning can also be used to accent events.

“About all of the things that I long to believe, About love and the truth and, What you mean to me, And the truth is baby you’re all that I need”

“You were born to be my baby, And baby, I was made to be your man”

“I never knew I had a dream, Until that dream was you”

“If it came right down to me and you, You know it’s true, Baby I’d die for you”

“You could sing a melody to me, And I could write a couple lines, You wanna make a memory”

“You can take this world away, You’re everything I am, Just read the lines upon my face, I’m all about lovin’ you”

Plus, check out our list of the best hair band power ballads too!