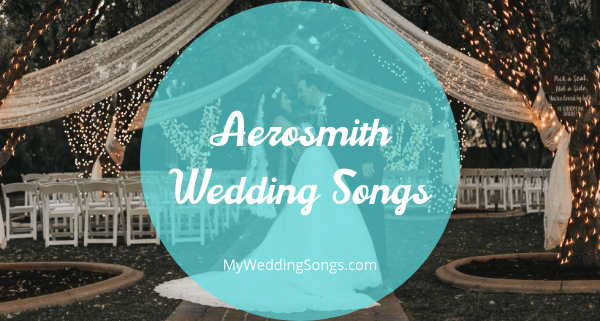 Aerosmith is one of the most legendary bands in all of rock and roll.  In addition to producing many rock love songs and wedding songs, Aerosmith has kept the members of the band together through good times and bad.

Led by Steven Tyler, Joe Perry, and Brad Whitford, Aerosmith first hit the airwaves in the 1970s with “Dream On” and other classics that are still in frequent rotation on satellite radio and music television. This was followed by a resurgence in the 1980s thanks to a collaboration with Run DMC. “Walk This Way” became a crossover MTV hit that blended rock and hip-hop.

In the 1990s Aerosmith provided soundtracks for films like Armageddon, and the band was exposed to a new legion of young fans. With a career that has spanned more than 40 years it is no surprise that many modern couples turn to Aerosmith for a wedding song. 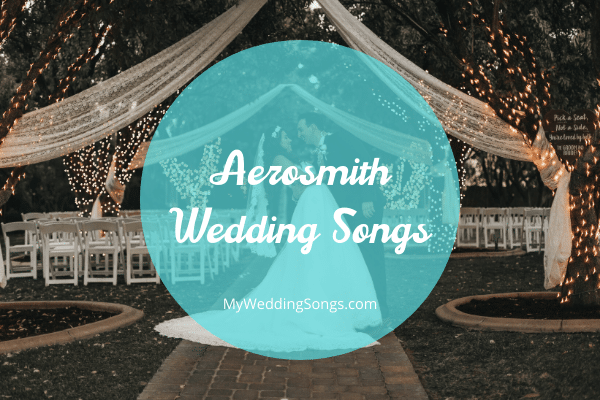 Read these other song lists:

In this list of the top Aerosmith wedding songs, you will find love ballads and dance music that can be used for your formal ceremony or for the wedding reception. When you choose to use Aerosmith classics at your wedding you can be sure that all of your guests will feel connected to the music of this iconic rock band.

I Don’t Want to Miss a Thing
1998, Armageddon Soundtrack

Cause even when I dream of you
The sweetest dream will never do
I’d still miss you, babe
And I don’t want to miss a thing

This theme from the film Armageddon is perhaps the best example of an Aerosmith wedding song, and it has also been covered by a few country artists. The song helped to renew Aerosmith’s career in the 1990s, and since that time it has been played as many brides make their way down the wedding aisle.

This song from the Nine Lives album has proven itself to be underrated, and it is a deep dive wedding song selection for the hardcore Aerosmith fans who want to celebrate their love for the band. It will be best saved for dancing, preferably toward the end of the reception.

Aerosmith can be irreverent at times with their song lyrics, and this song is a perfect example of the sense of humor possessed by Tyler and Perry. Nevertheless, the song has meaningful lyrics that can be appreciated by wedding guests of all ages.

This is another example of the blues influences that can be felt in the music of Aerosmith, and it is played often at wedding receptions that have a strong classic rock theme. You might want to consider this song as the soundtrack for the send-off at the end of the night.

You said you’d never leave me
You love me, you hate me, I tried to take the loss
You’re cryin’ me a river, but I got to get across

Even though the lyrics might not seem like the best for a wedding celebration this song is often added to the reception playlist, and it has also been played as the cake is being cut. Our preference would be to use it during the reception when the mood calls for a slow dance that all of your guests can share.

This classic from Aerosmith is a pure example of rock and roll fun, and don’t be afraid to insert a little bit of fun into your own wedding ceremony with music choices like this one. It should be reserved for reception dancing, and will probably go over better after everyone has loosened up following the celebratory toasts.

This love ballad features a stunning vocal performance from Steven Tyler, and it also has plenty of trademark guitar licks from Joe Perry. “Angel” is a song that can be used as an alternative wedding processional, but some grooms like to save it as a special dedication to the bride at the reception.

It wouldn’t be a wedding without fun celebrations after all the serious business has been taken care of, and that’s why you should put this Aerosmith love song on your playlist. It might not strictly be a wedding song, but it sure has a naughty vibe that will put a smile on the face of every wedding guest.

Sweet Emotion
1975, Toys in the Attic

You’re calling my name but I gotta make clear
I can’t say, baby, where I’ll be in a year

This Aerosmith classic is a blend between a hard rocker and a blues ballad, and it rings true with newlyweds who are looking for a way to set a spicy tone for the wedding reception. This is one of those songs that has the ability to bring everyone out on the dance floor, so have your DJ play it when the festivities need a pick-me-up.  Because of the wors sweet in the title of the song, it is very popular cake cutting song.

Aerosmith should be given at least some credit for launching the career of Run DMC into the mainstream with this memorable collaboration, a song that was at the top of MTV rotation in the 1980s. The mix of rap and rock will be a welcome addition to any wedding reception playlist.

Sing for the laughter, and sing the tear
Sing with me, if it’s just for today
Maybe tomorrow, the good Lord will take you away

Dream On is the song that started it all for Aerosmith, and it remains one of the most requested songs by the band’s fans today. This is a slow ballad that builds to a strong climax, and that makes it a good choice for introducing the bride and groom for the first time as man and wife.

I hope you enjoyed our list of favorite Aerosmith wedding songs. If you have a song not on our list, be sure to comment on it below so that we can add it.

What is the Wedding Songs Podcast? – Sneak Peek – E1