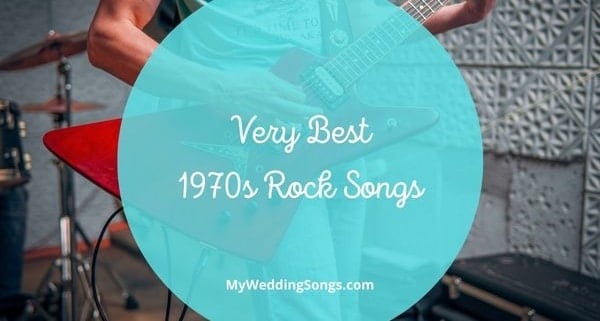 If you ask any rock music fan, they will probably agree that the 1970s was the golden age of rock music. The rock genre had never seen anything like the 1970s and, in truth, it hasn’t since.

The late 60s and throughout the 70s saw the emergence of some of the greatest rock bands that have ever been, such as Led Zeppelin, Deep Purple, Queen, The Eagles, The Who, and many, many more. Not only was the 1970s an age of rock Gods but it also brought about sub-genres of rock. Some of these sub-genres include punk, country rock, and jazz-rock. And, to this day, the musicians of that time have influenced music culture throughout different generations.

There is no doubt that the 1970s was the dawn of experimentation in rock music. And, thanks to innovation and new technologies, rock music became a global phenomenon. Although rock music has remained an important part of music culture since the 1960s, the 1970s always had and still has, a true, unique rock identity.

Today, we are going to celebrate the great decade of rock, the 1970s. We will be taking a look at the best rock songs from this decade, and some may be quite surprising to you. We will be looking at the different subgenres of rock that shaped popular music for the decades to follow.

So, if you’re a 1970s music fan, you’re in the right place. Turn up your speakers and get ready to find out our selection of the very best rock songs from the 1970s. 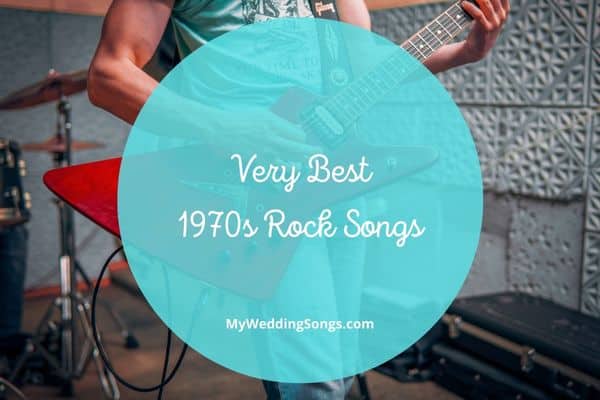 Smoke on the Water – Deep Purple

We start our list with one of the most famous riffs of all time. Smoke on the Water by English rock band Deep Purple has everything you need and expect from a 70s rock tune. Released in 1972 on the band’s album Machine Head, it was an immediate hit, winning the RIAA Gold Record Award that year.

Smoke on the Water is a riff played by millions of guitarists around the world. It is so popular, it is actually one of the first songs many guitarists learn. Quite the legacy! But, many do not know what the song is about. Smoke on the Water was actually inspired by a casino that the band witnessed catch fire whilst they were attending a Frank Zappa concert in Switzerland. Thanks to this unfortunate event, Deep Purple enjoyed the biggest hit of their careers.

Perhaps better known for their worldwide hit Sweet Home Alabama, we are including a song from Lynyrd Skynyrd’s self-titled first album. Reaching number 19 on the Billboard Hot 100 charts, Free Bird soon started to get national airplay and has not been off the airwaves since.

This song has been popular for nearly 50 years, so much so that it has sold over one million copies worldwide, earning it a gold disc from the RIAA (Recording Industry Association of America). This song has everything, blistering guitar solos, meaningful lyrics, and those famous 1970s country harmonies.

Released in 1977, Sultans of Swing is a unique rock anthem from British rockers Dire Straits. With one of the most iconic guitar licks of all time, this track became a hit on BBC radio in the UK. Before long, though, it was a worldwide hit.

Having been rerecorded in 1978, it reached the top 10 of the UK, Irish, and Australian charts. In the US, it reached the top 5, as well as in Canada, and South Africa. With countless other incredible songs, Sultans of Swing remains one of the band’s most distinctive rock songs thanks to Mark Knopfler’s unique guitar playing style and almost lazy, speaking vocals.

You may not see this Aerosmith song on many best rock songs lists but we had to include it as it has everything you want from a world-class rock tune. Perhaps better known for their 1980s hits such as Walk This Way and 1990s hits like Crazy and I Don’t Want to Miss a Thing, Aerosmith has been beloved by music fans for over 50 years!

Dream On is one of the band’s earlier recordings, released on their very first studio album. Although we all know lead singer Steven Tyler’s unique vocals today, Dream On was the only track on the album where he ‘let rip.’ This song was the band’s first real hit in 1973, but it wasn’t until 1976 that it reached its peak in the charts at number 6. Today, it is an absolute classic rock song.

Elton John has been a critically acclaimed singer-songwriter for over 50 years. But, the 70s was the decade where we were all introduced to his genius and incredible songs.

Seemingly releasing a new album every week, Tiny Dancer was released on John’s album Madman Across the Water in 1971 before being released as a single in 1972. With Elton John’s distinctive, country-like vocal style and high-reaching notes, this is another anthemic song from the 70s. Used in movies such as Almost Famous, Tiny Dancer continues to capture the imagination of young music fans and has inspired countless musicians, including British singer-songwriter Tom Odell, to create and release piano-based music in the 21st century.

We Will Rock You – Queen

Full of angst and power, We Will Rock You is a punchy rock song from one of the greatest bands of all time, Queen.

Released in 1977, this classic rock tune has been covered thousands of times by rock stars, pop stars, and, well, everyone! It has gone on to become one of Queen’s most famous songs, with a West End musical being named after it. Listen to this track today and it sounds as fresh as it did, way back in 1977.

Layla – Derek And The Dominoes

Whilst many remember the 1970s as the decade for disco and punk, there is no doubt that it was also the time of the best guitar riffs of all time. Layla, by Derek And The Dominoes, was released in 1970 after Eric Clapton formed the band.

Not only is Layla a catchy, singalong anthem, but many consider it to be Clapton’s very best work. With a scintillating guitar riff and solo, it’s amazing to think that this was off the band’s only studio album. To celebrate the album’s importance to music, it was inaugurated into the Grammy Hall of Fame in 200 and, in 2012, the album received a Grammy Award for the Best Immersive Audio Album. We can’t argue with that!

Have You Ever Seen The Rain? – Creedence Clearwater Revival

Simple but highly effective. This song from Creedence Clearwater Revival epitomizes John Fogerty’s songwriting skills. With Fogerty’s powerful vocal range and a band consisting of some of the greatest rock musicians that have ever lived, it’s no surprise that the highly catchy ‘Have You Ever Seen The Rain?’ is one of the greatest rock songs ever, let alone the 1970s.

Released as a single from the band’s Pendulum album, this song has been recorded by many artists down the years, such as Rod Stewart and Willie Nelson. However, Creedence was not destined for the long run. According to John Fogerty, ‘Have You Ever Seen The Rain?’ was in reference to the band’s imminent breakup. Just listen to the lyric ‘rain on a sunny day and it all makes complete sense.

Don McLean’s American Pie is a storytelling song at its finest. Lasting an astonishing 9 minutes, this 1972 classic is about the day the music died when Buddy Holly, Ritchie Valens, and the Big Bopper all died in a plane crash in 1959.

Just 13 years later, this track became a record-breaker, being the longest song at number 1 on the Billboard Hot 100 chart. To this day, American Pie enjoys incredible success with new generations finding the song thanks to modern artists covering it such as Ed Sheeran and Madonna. Every year, in fact, this track brings in $300K to $500k in royalties for McLean. Just tune into the radio today and you’re likely to hear this classic 70s tune.

Wish You Were Here – Pink Floyd

Pink Floyd. One of the most successful rock bands in music history. We could have included any number of Pink Floyd songs on this list but we have decided on Wish You Were Here from their 1975 album of the same name.

Considered to be one of the best albums of all time, in any genre of music, Wish You Were Here is just one song of four epic tracks. Composed as an elegy for original frontman Syd Barrett, the track has a special place in the hearts of the band members and Floyd fans around the world. It gives you everything you could ever want from a Pink Floyd song and more. That is why we think it is one of the band’s greatest songs in their long history.

We go back to the start of the 1970s with Black Sabbath’s most famous track, Paranoid. Yet again, this is a perfect example of a 70s tune with a world-famous guitar lick by Tony Iommi.

Many consider this song to be one of the first ‘metal’ songs ever released. In fact, Black Sabbath is often regarded as the father of heavy metal. With Ozzy Osbourne at the helm, singing with his unique and powerful voice, Paranoid took listeners to places they had never been before. We had to include this in our list for its innovation and pure excellence.

A breakout star in the 1970s, Bruce Springsteen could have appeared on this list multiple times. But, today, we are going with his 1975 song Born to Run from the same-titled album.

This song shows Springsteen’s songwriting prowess with evocative lyrics and a huge, almost big band sound. The album this song is from has gone on to sell over six million copies in the US but it’s the song, Born to Run that helped Springsteen break into the mainstream and set the world alight.

We couldn’t finish a 1970s list about music without mentioning one of the most iconic and best songs of all time, Bohemian Rhapsody. Written by the eccentric yet incredible frontman Freddie Mercury, this song almost never saw the light of day due to the band’s record company thinking it was too long to release. Thankfully, due to the band’s persistence, the song hit the airwaves and the rest is history.

Covered by countless other artists since its release in 1975, Bohemian Rhapsody is considered to be one of the best songs of all time, not just in the 1970s. It has won many awards such as Song of the Year at The Brit Awards in 1977 and Best Video from a Film at the MTV Video Music Awards in 1992.

More recently, it was entered into the Grammy Hall of Fame in 2004 and continues to be one of the most beloved and played songs to this day. 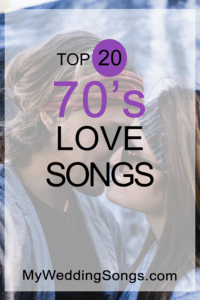 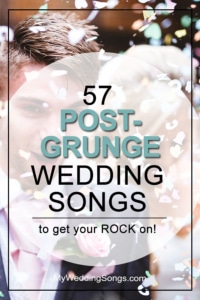 57 Post-Grunge Wedding Songs To Get Your Rock On 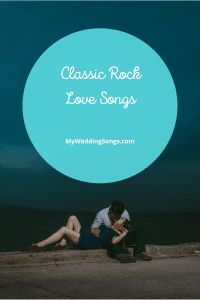 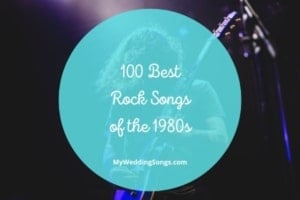 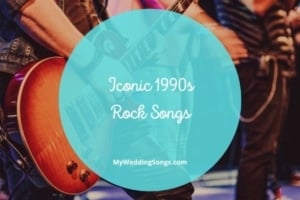