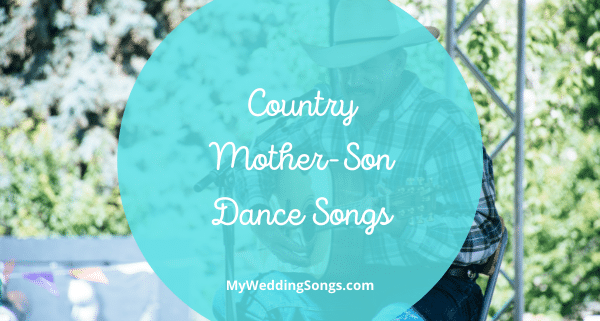 The bond between you and your mother is special. Why not choose a country song for the Mother-Son Dance at your wedding? We have suggestions that we think you will like.

Any song will work, but the right song will capture hearts — and make forever memories.

Why Should Your Mother-Son Dance Be Country?

Country music is known for its down-to-earth approach, storytelling, and emotion. These songs are written from the heart. They honor family and home.

Whether the mother-son dance is a stepmother, your grandmother, or a special family member or friend, you’re sure to create forever memories when you choose the right song. 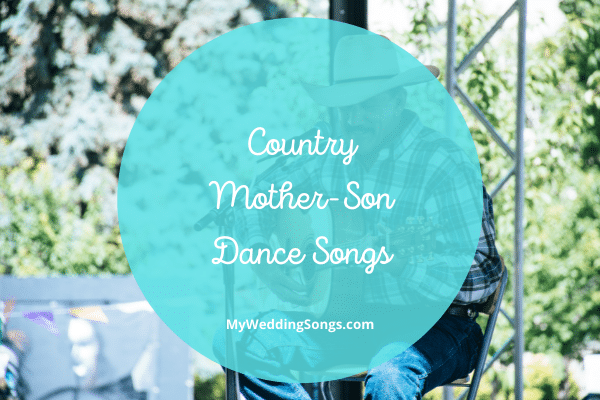 I ain’t been yet, but I’ve got a glimpse of Heaven
‘Cause mama ain’t Jesus, but she’s a close second

Son Of A – Dillon Carmichael

That’s What Mamas Are For – Chris Lane

And she put her blood, sweat, and tears into raisin’ me
And maybe a little more
Thank the Lord, that’s what mamas are for

Released in 2021 on the album Mama’s Boy

Mama Was Daddy Too – Tainted Lyric

Released in 2021 on the album Mama Was Daddy Too

Released in 2020 on the album Country Things

Behind any guy doing anything right
There’s a woman’s work at hand
If a man made anything, it’s ’cause
A woman made that man

Released in 2020 on the album Nashlahoma

Released in 2020 on the album Here on Earth

Wrote a song just for me
And I sung it for the blue sky
And a couple live oak trees
I thought of home, grabbed my phone from my pocket
And I called mama

Released in 2019 on the album Thomas Finchum

Released in 2018 on the album Bigger

See our list of popular Mother and Son Dance songs in different genres for your wedding day!

The Best Part Of Me – Lee Brice

Released in 2017 on the album Lee Brice

But the best part of me, part of me is you
Is you, is you

You Are My Sunshine – Morgane Stapleton with Chris Stapleton

Released in 2016 on the album Southern Family

You are my sunshine, my only sunshine
You make me happy when skies are grey

What I Never Knew I Always Wanted – Carrie Underwood

Released in 2015 on the album Storyteller

Released in 2015 on the album Damn Country Music

Released in 2014 on the album Man Against Machine

‘Cause there’s someone down there waiting whose only goal in life
Is making sure you’re always gonna be alright
A loving angel tender, tough and strong
Come on child it’s time, to meet your Mom

If I Didn’t Have You – Thompson Square

Released in 2013 on the album Just Feels Good

Released in 2013 on the album Pioneer

Released in 2011 on the album Chief

Released in 2011 on the album Wildflower

Next, pick your Country first dance song as a married couple.

Released in 2009 on the album Play On

Released in 2008 on the album Hicotine

And when she bows her head to pray,
You can bet she’s saying one for you
That’s what mamas do

I have an excellent father
His strength is making me stronger

Released in 2007 on the album Just Who I Am: Poets & Pirates

Released in 2006 on the album Me and My Gang

My wish, for you, is that this life becomes all that you want it to,
Your dreams stay big, your worries stay small

Released in 2006 on the album Escape

Released in 2006 on the album Precious Memories

His word shall not fail you, He promised
Believe Him and all will be well

You’re Gonna Be (Always Loved by Me) – Reba McEntire

We just have to believe things work out like they should
Life has no guarantees, but always loved by me

God’s Been Good to Me – Keith Urban

Released in 2004 on the album Be Here

Released in 2004 on the album Passing Through

No robe of white
No halo in site
Well you missed the most obvious thing
Man, are you blind?
Just look in your mother’s eyes

After the wedding ceremony is over, pick your Country grand entrance song going into the reception hall.

Then They Do – Trace Adkins

Released in 2003 on the album Greatest Hits Collection, Vol. 1

Released in 2003 on the album The Dreamer

I guess she was tired by the time I came along, she’d laugh until she cried
I could do no wrong. She would always save me, because I was her baby

He Gets That From Me – Reba McEntire

Released in 2003 on the album Room to Breathe

Released in 2001 on the album Pearl Harbor Soundtrack

I’ll keep a part of you with me
And everywhere I am, there you’ll be

Released in 2000 on the album I Hope You Dance

If Country music is your favorite style of music. see our list of the best country wedding songs.

If you have a favorite Country Mother Son Dance song, please share it below and why it is special to you.

The Mother-Son Bond and Your Wedding

There’s no bond quite like a mother and her son. His wedding day is bittersweet; she loses her son but gains a daughter. Those special moments growing up should be cherished.

Your mom has been there with you through thick and thin. She gave you a Power Rangers band-aid when you had your first owie. She nursed you when you had the flu. She celebrated the time you won MVP on your varsity football team. She cooked, cleaned, and washed your chinos. She ate the breakfasts you made on Mother’s Day. (Now, that’s true love.)

Every mother-son relationship is unique. Choosing that perfect song for the mother-son dance at your wedding — as the groom — is just as important.

What is the Best Mother-Son Dance Song?

If you want Mother-Son dance ideas that are not in the Country music style, we have that, too.

Is one missing? Which one would you suggest?