Updated on December 3, 2022 | Written by Matthew Campbell (Editor of My Wedding Songs and veteran DJ)

Everyone knows about the special dances between a bride and her father and the dance between a groom and his mother.

These are the more popular parent dances at a wedding reception.

Why not include your father and mother-in-law in the dance spotlight?

What is an in-law dance at a wedding?

Blended families, step-parents, and same-sex couples can all incorporate their in-laws at their weddings.

It is up to you, as the wedding couple, how much attention to focus on these dances but we’d like to inspire you to think beyond tradition. 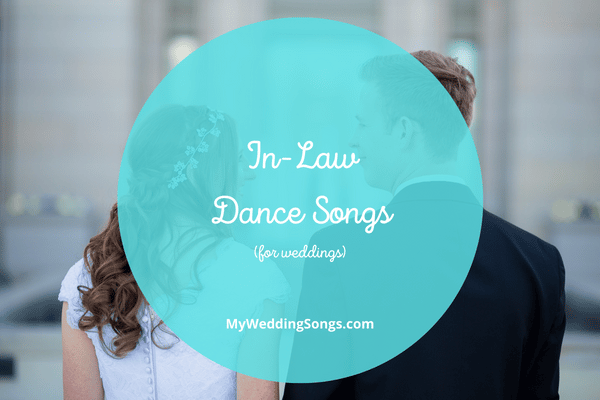 You will enjoy a list of the most popular and unique in-law dance songs.

Every couple’s music tastes are different. Thus, we selected in-law dance songs that include many different eras and genres.

Welcome To This Day – Reprise – Josh Kelley and Melissa Etheridge

Welcome sweet sun ray
Love is no secret,
Look all around you
Welcome to this day

Use Somebody – Kings Of Leon

You know that I could use somebody
Someone like you

Hold My Hand – Hootie & The Blowfish

I’ll Stand By You – The Pretenders

You fill my heart with gladness
Take away all my sadness
Ease my troubles, that’s what you do

For all the wisdom of a lifetime, no one can ever tell
But whatever road you choose, I’m right behind you win or lose

Where as a child I’d hide
And pray for the thunder and the rain to quietly pass me by
Whoa, oh, oh
Sweet child o’ mine

Up Where We Belong – Joe Cocker & Jennifer Warnes

Don’t stop believin’
Hold on to the feelin’

Every Little Thing She Does Is Magic – The Police

Somebody To Love – Queen

I ain’t gonna face no defeat (yeah yeah)
I just gotta get out of this prison cell
One day (someday) I’m gonna be free, Lord!

How Sweet It Is (To Be Loved By You) – James Taylor

You’ve Got A Friend – James Taylor

‘Cause we believe in you
Soon you’ll grow, so take a chance
With a couple of kooks hung up on romancing

Here Comes The Sun – The Beatles

Sunshine Of Your Love – Cream

In My Life – The Beatles

I’m Happy Just To Dance With You – The Beatles

Before this dance is through
I think I’ll love you, too
I’m so happy when you dance with me

If you are planning a dance with your in-laws, don’t forget about your parents. See our lists of father-daughter dance songs and mother-son dance songs.

Love the ones I’m living ’roundLife is just that simple to meYeah, I’m a rich man

The Good Ones – Gabby Barrett

You Are My Sunshine – Morgane Stapleton with Chris Stapleton

Can’t live with or without ’em, you might talk about ’em
But if someone else does, well, then you’ll knock ’em out ’cause
When it’s all said and done, they’re the only ones that you got

Meanwhile Back At Mama’s – Tim McGraw

‘Cause meanwhile back at Mama’s
The porch lights on, come on in if you wanna
Suppers on the stove, and beer’s in the fridge

She forgives me when I can’t
And the devil, man, no, he don’t have a prayer
‘Cause she loves me like Jesus does

Don’t blink, you just might miss
Your babies growing like mine did
Turning into moms and dads

My wish, for you, is that this life becomes all that want it to
Your dreams stay big, your worries stay small
You never need to carry more than you can hold

I Just Want To Dance With You – George Strait

So let it show, let it shine
If we have a chance to make one heart of two
I just wanna dance with you

Some are lucky, others ain’t
Some are fighters, others faint
Winners, losers, sinners, saints
It’s all family

Love Can Build A Bridge – The Judds

If your father is not in your life or if you don’t have a close relationship, you can always have a mother-daughter dance or a sister-brother song or sister song for a dance or dedication.

We been going through the sam? thing, yeah
You are, you are
My chosen, chosen family

Blended Family (What You Do For Love) – Alicia Keys feat. A$AP Rocky

When the world seems so cruel
And your heart makes you feel like a fool
I promise you will see
That I will be, I will be your remedy

Make You Feel My Love – Adele

Don’t need no hateration
Holleration in this dancery
Let’s get it percolatin’, while you’re waiting
So just dance for me

Call on me, I will be there
Don’t be afraid
Please believe me when I say
Count on me

I’ll Be There – Mariah Carey

Let me fill your heart with joy and laughter
Togetherness, well it’s all I’m after
Just call my name, and I’ll be there

Lean On Me – Club Nouveau

Lean on me, when you’re not strong
And I’ll be your friend
I’ll help you carry on

And oh, I’ll be there to comfort you
Build my world of dreams around you
I’m so glad that I found you
I’ll be there with a love that’s strong
I’ll be your strength
I’ll keep holdin’ on

We Are Family – Sister Sledge

Isn’t she pretty?
Truly the angel’s best
Boy, I’m so happy
We have been Heaven-blessed

Lean on Me – Bill Withers

Although a tear may be ever so near
That’s the time you must keep on trying
Smile, what’s the use of crying?
You’ll find that life is still worthwhile
If you just smile

Three little birds
Pitch by my doorstep
Singing sweet songs
Of melodies pure and true
Saying, “This is my message to you”
Singing, don’t worry about a thing
‘Cause every little thing gonna be all right

One of the most romantic parts of your reception is your first dance. Pick a first dance song that means something to you whether it is slow or upbeat.

I’m right here, ’cause I need
Little love, a little sympathy
Yeah you show me good loving, make it alright

You make me dance like a fool
Forget how to breathe
Shine like gold, buzz like a bee
Just the thought of you can drive me wild
Oh, you make me smile

Isn’t it remarkable?
Like every time a rain drop falls
It’s just another ordinary miracle today

Seasons Of Love – Cast Of Rent

How about love?
Measuring love
Seasons of love

You Raise Me Up – Josh Groban

Never knowin what love could be, you’ll see
I don’t want love to destroy me like it has done
My family

You’ll Be In My Heart – Phil Collins

You’ve Got a Friend in Me – Randy Newman

Can You Feel The Love Tonight – Elton John

And can you feel the love tonight
How it’s laid to rest?
It’s enough to make kings and vagabonds
Believe the very best

I Wish You Love – Natalie Cole

Because You Loved Me – Celine Dion

These Are the Days – Van Morrison

Wind Beneath My Wings – Bette Midler

What A Wonderful – Louis Armstrong

After all of the formal dances, you can have a wedding party dance to get the party started and fill the dance floor with you and your guests.

The Best Is Yet To Come – Michael Buble

A Wink And A Smile – Harry Connick Jr.

Just the sound of your voice
The light in your eyes
You’re so far away from yesterday
Together, with a wink and a smile

‘Cause when you worry your face will frown
And that will bring everybody down
So don’t worry, be happy

Lovely; never, ever change
Keep that breathless charm
Won’t you please arrange it? Cause I love you
Just the way you look tonight

If you have step-parents, select a song just for your relationship! Have a dance to a stepmom and stepson song and a stepdad and stepdaughter song.

Family, all in this together
Family, we’re taking a chance
Family, like birds of a feather
Family, kick off your shoes and dance

May good fortune be with you, may your guiding light be strong
Build a stairway to heaven with a prince or a vagabond
And may you never love in vain
And in my heart you will remain

If you get lost, you can always be found
Just know you’re not alone
‘Cause I’m gonna make this place your home

Tip: In order to shorten the time for your formal dances, you can choose to have a combined parent dance.

Who can say if your love grows
As your heart chose? Only time
And who can say where the road goes?
Where the day flows? Only time

Over the Rainbow – Israel Kamakawiwo’ole

We don’t do friends round here
Round here, it’s brotherhood (brotherhood)

Why would you include wedding dances with the in-laws?

When would I dance with my mother-in-law?

The wedding couple can make the in-law dances immediately following the father-daughter and mother-groom dances. Additionally, the in-laws can tap in mid-dance. If you choose this option be sure to coordinate with your professional DJ.

It’s worth noting that the more formal dances you have, the more time guests are waiting to cut loose and dance themselves. We would recommend announcing that the bridal couple has a special song with their in-laws and inviting everyone to join in with their dance(s).

What if I don’t want an extra dance with my in-laws?

Another reason for the in-law song list is when parents have deceased or there is family estrangement. Let’s face it, that’s a real possibility in today’s modern family. This gives an option to dance with a spouse’s parent for the father-daughter and/or mother groom dance when the designated parent is not able to attend the wedding reception.