Skip to content
Home > Wedding Songs by Year > Top 2011 Wedding Songs for We Found Love
My Wedding Songs is a reader-supported website. As an Amazon Associate, we earn revenue from qualifying purchases. Purchases made through links on this page may earn us a commission but also support the artists.

The very best 2011 wedding songs can be found in this list of hits from Bruno Mars, Lady A, Pitbull, and many more influential music stars. Many of the songs on this list are great dance tunes, but you’ll also find music that can be used to make your formal wedding ceremony something to remember. 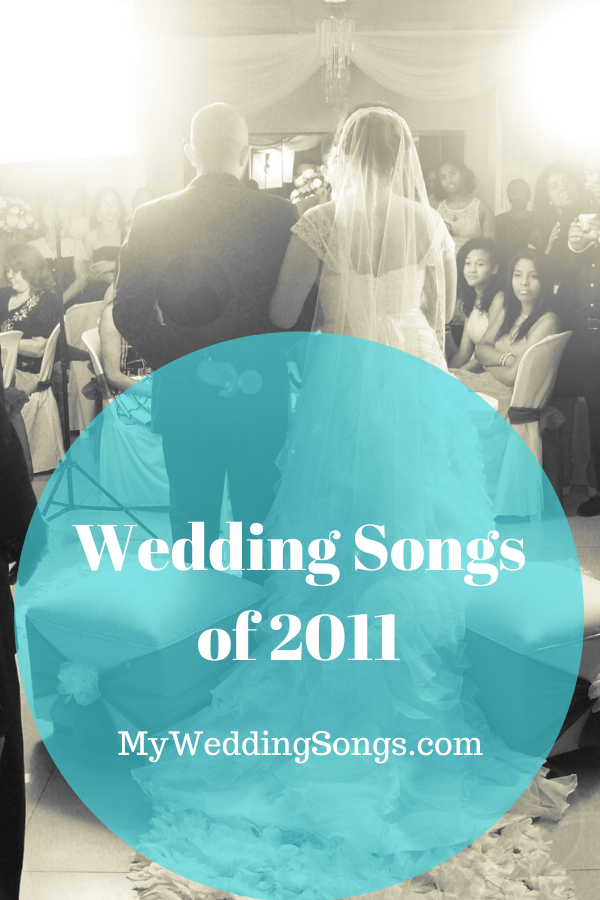 Party Rock Anthem – LMFAO featuring Lauren Bennett & GoonRock
January 2011, Sorry for Party Rocking
This song by LMFAO is one that young newlyweds have used to get their wedding reception off to a lively start, often playing it for their entrance. It has a strong beat that will set the right mood for your party, and the overall vibe is one of celebration.

Give Me Everything – Pitbull Featuring Ne-Yo, Afrojack & Nayer
March 2011, Planet Pit
Pitbull released this song in 2011 and it has become a standard on wedding DJ playlists. It is most often used as a dance tune, but it also has a strong lyric that reinforces the theme of commitment that is common to weddings.

Put it on my life, baby
I’ll make you feel right, baby
Can’t promise tomorrow
But I promise tonight

Moves Like Jagger – Maroon 5
June 2011, Hands All Over
This was one of the big hits that helped to define the musical legacy of Adam Levine and Maroon 5, and it has endured in popularity since its release. Featuring Christina Aguilera, the song has become the perfect dance tune for wedding receptions and other celebrations.

On the Floor – Jennifer Lopez featuring Pitbull
February 2011, Love?
You can give your wedding reception guests a reason to get out on the dance floor when you include this hot mix by Jennifer Lopez that features Pitbull, a Miami party legend. The song is all about dancing and enjoying life, so let your hair down and enjoy your happy day.

Don’t stop, keep it movin’
Put your drinks up
Pick your body up and drop it on the floor

Just the Way You Are – Bruno Mars
July 2010 carryover, Doo-Wops & Hooligans
This song by Bruno Mars is sometimes used in weddings to accompany the bridal party to the altar just before the bride enters the chapel. It can serve as a nice blend of music new and old if you want to include both traditional and modern elements in your wedding festivities.

The whole world stops and stares for a while
‘Cause girl, you’re amazing
Just the way you are

Raise Your Glass – P!nk
October 2010 carryover, Greatest Hits… So Far!!!
Few musical artists of the current generation can deliver a dance song like P!nk, and this hit is often selected as the first tune for the wedding reception. Imagine all the toasts and cheers as you and your new partner enter the reception with this song playing in the background.

So raise your glass if you are wrong
In all the right ways
All my underdogs
We will never be never be, anything but loud

Good Life – OneRepublic
November 2010 carryover, Waking Up
Those who want a little more pop influence in their wedding music selections can always depend on OneRepublic, and this is a song you will often hear as the wedding couple leaves the altar as a recessional song. It has an appropriate message for couples, one that says they are creating a good life together.

Say oh, got this feeling that you can’t fight
Like this city is on fire tonight
This could really be a good life

We Found Love – Rihanna Featuring Calvin Harris
September 2011, Talk That Talk
This song from Rihanna features Calvin Harris, and it is all that you would expect from the modern songstress. Every wedding reception should include a few songs that are pure celebrations of love and happiness, and this one serves a dual purpose by also being a great dance tune.

Just a Kiss – Lady A
May 2011, Own the Night
Lady A reminds us that so many lifelong relationships begin with a kiss, and they are sealed with one on the day of your wedding. This popular country group has a talent for rich harmony and emotional ballads, so it would be appropriate to use this song in the formal parts of your wedding.

Just a shot in the dark that you just might
Be the one I’ve been waiting for my whole life
So baby I’m alright, with just a kiss goodnight

Dynamite – Taio Cruz
May 2010 carryover, Rokstarr
Let the music of Taio Cruz create a mood for celebration at your wedding reception, and open up the dance floor to all of your guests who want to share your happiness. This is a song that brings people together, and that is just the type of music you should feature when it’s time to party after the wedding vows.

Yeah 3X – Chris Brown
October 2010 carryover, F.A.M.E.
You can encourage everyone to join the party and dance when you spin this song by Chris Brown at your own wedding reception. Don’t neglect the party vibe of the reception, and always be willing to add bold music choices that reflect your own modern tastes.

Hold your glasses up
People everywhere
Now everybody put your hands in the air
Say yeah, yeah, yeah

Honey Bee – Blake Shelton
April 2011, Red River Blue
Blake Shelton scored two entries on this list of 2011 wedding songs, and this is the more lighthearted selection. You might want to think about making it the soundtrack for the first dance with your partner, but make sure that you use it in any part of the wedding day that calls for something less formal.

Crazy Girl – Eli Young Band
March 2011, Life at Best
You can observe the personality of any girl from the country and find many of the traits referenced in this song by the Eli Young Band, a hit that honors the unique nature of a young woman. The song should be played as a special dedication to the bride on her wedding day.

Country Girl (Shake It for Me) – Luke Bryan
March 2011, Tailgates & Tanlines
Luke Bryan has had a number of huge hits as a country artist, and some of them have a fun-loving side that is very reflective of modern romantic attitudes. The song is made for dancing, of course, but you might also want to think about playing it as the wedding cake is cut.

God Gave Me You – Blake Shelton
July 2011, Red River Blue
Country music can often be more reflective of spiritual values than other genres and Blake Shelton demonstrates an appreciation of those guiding principles with this song. It should be used by couples who want to preserve the religious significance of a wedding while also adding a modern musical touch.

And for when I think I lost my way
There are no words here left to say, it’s true
God gave me you

1+1 – Beyoncé
May 2011, 4
Beyoncé is a musical artist that has become nothing less than royalty, and you will want to include hits like this one from her large catalog at your wedding celebration. Most songs from Bey are intense in both music and lyrics, and this song is no exception.

A Thousand Years – Christina Perri
October 2011, The Twilight Saga: Breaking Dawn — Part 1: Soundtrack
There are some modern songs and love ballads that can be used to replace the standard bridal march, and this smash from Christina Perri is one of the rare tunes you can use for your wedding processional. It’s soft and poignant, and it has a powerful message of devotion that lasts forever.

Don’t forget to check out the songs from last year – a list of the top 2010 wedding songs.

Celebrating weddings of 2011. Where were you and what was happening?

Congratulations on your wedding of 2011. You share your anniversary with the following events.

See a list of all wedding songs by the year the songs were released.

Learn more about 2011 on Wikipedia. Thank you for visiting our page – weddings of 2011.

Have a favorite wedding song from 2011? If so, please share your song below in he comments.