Skip to content
Home > Offbeat > DJ Hit Songs By Prominent DJs – Do You Know Them?
My Wedding Songs is a reader-supported website. As an Amazon Associate, we earn revenue from qualifying purchases. Purchases made through links on this page may earn us a commission but also support the artists.

The art of DJing has exploded over the years. Now, it’s rare to turn on a radio without hearing the latest hit single or trending remix.

These musicians expand their reach across the globe. Their prowess extends past underground channels into becoming mainstream DJs while continuing to rise. Be sure to check out the DJ hit songs too!

Celebrate Disc Jockey Day each year on January 20. Our list below brings recognition to disc jockeys that master their craft. 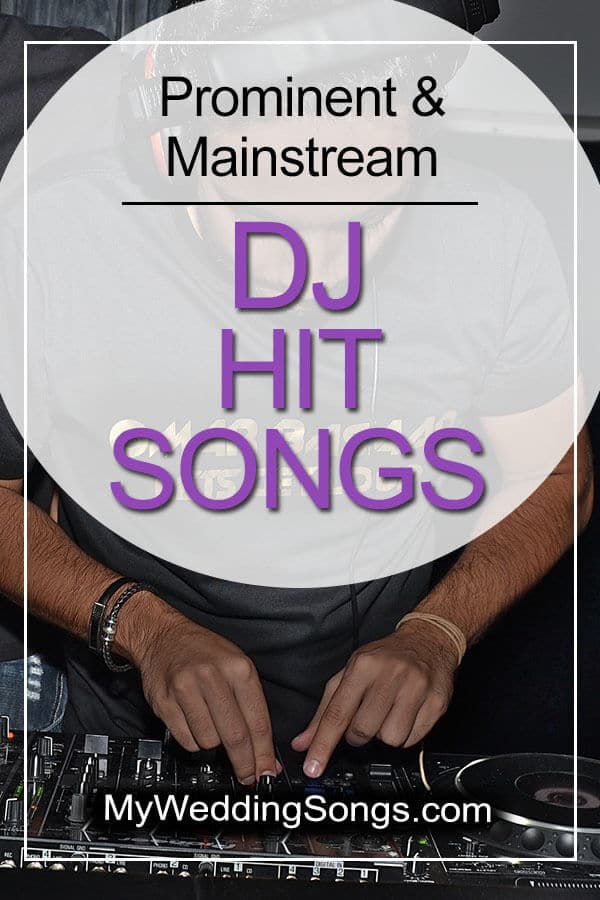 The following list is just a glimpse at some of the more popular DJs on the music scene right now.

If you want to see a current list of the hottest DJs right now, see DJ Mag’s Top 100 DJs list.

Born Pierre David Guetta, the French-native is a house music DJ, songwriter, record producer, and remixer. In the 1980s, he first kicked off his DJ career at the Broad Club in Paris, and by 1988, he hosted his own club nights. Since then, Guetta has had a hand in several hit songs with numerous artists. Some popular works are “Titanium” featuring Sia, “Hey Mama” featuring Nicki Minaj, Bebe Rexha, and Afrojack, and “Club Can’t Handle Me” with Flo Rida and Nicole Scherzinger.

Tijs Michiel Verwest, better known as his stage name Tiësto, is a Dutch DJ and record producer. He has been lauded as the “Godfather of EDM”. His interest in music began at the age of 12. By the time he was 14, he started DJing professionally. Tiësto continues to be more than a DJ; rather, he’s a brand. His name is spoken widely in EDM genre circles. His discography is massive with some of his popular hits being “Adagio for Strings” and “Red Lights“.

Tiësto has been nominated for two Grammys and won one. Additionally, he’s been up for 59 various awards and is the first DJ to hold DJ Magazine’s title of “No. 1 DJ in the World” for three consecutive years.

Calvin Harris (born Adam Richard Wiles) is a Scottish DJ, record producer, singer, and songwriter. He first gravitated toward electronic music in his teenage years. By 1999, he recorded bedroom demos. At age 18, he released two singles and eventually moved to London to further pursue his music career. Harris’ hits include “We Found Love” and “This Is What You Came For” with Rihanna, and his solo work “Feel So Close” and “Summer“.

Nick van de Wall, aka Afrojack, is a Dutch DJ, remixer, and record producer. He started off playing piano at the age of 5, and once he was 14, he began DJing at clubs and local pubs. Afrojack has several producing, remixing, and songwriting credits. He’s worked alongside fellow DJs such as David Guetta for the hit “Hey Mama” featuring Nicki Minaj and Bebe Rexha. His discography also includes “Give Me Everything” with Pitbull, Ne-Yo, and Nayer, and also a songwriting credit on Beyoncé’s “Run the World (Girls)“.

Steven Hiroyuki Aoki is an American electro house DJ, record producer, and music executive. During his college years at the University of California, he ran underground concerts and produced do-it-yourself records from his Biko room in the Santa Barbara Student Housing Cooperative. His apartment was known as The Pickle Patch, and by the time he was in his early 20s, he built his own record label, Dim Mak. Popular songs include “No Beef” with Afrojack and Miss Palmer, and “Turbulence” with Laidback Luke and Lil Jon.

Aoki has received a number of awards, nominations, and recognitions throughout his career. He was nominated for his first Grammy in 2012. In 2014, he received two Guinness World Records.

Avicii (real name Tim Bergling) is a Swedish musician, DJ, record producer, and remixer. He signed a record deal in 2007, but it was not until 2011 that his work became a part of mainstream culture. In the summer of 2016, he announced his retirement from touring, yet assured fans he would continue to create music. His hits include “Wake Me Up” with Aloe Blacc and “Hey Brother” with Dan Tyminski.

Anton Zaslavski, stage name Zedd, is a Russian-born German DJ, record producer, and musician. Born to two musicians, he is classically trained and began playing piano at 4 and drums at 12. He started producing electronic music in 2009 and has made hits like “Stay the Night” featuring Hayley Williams, “Break Free” with Ariana Grande, and “Starving” with Hailee Steinfeld and Grey.

He has been nominated and has won several awards such as his first Grammy in 2014 and an MTV Video Music Award for his hit “Stay the Night“.

These seven DJs are only a few of the lauded musicians that are making waves in the music world today. Artists such as these defy all genre boundaries and create lively, emotional, and energetic sounds to entertain the masses.

Other articles to read about DJs: