You are here: Home1 / Wedding Music Blog2 / Era Song Lists3 / Top 2010 Wedding Songs Love You Just the Way You Are

2010 served up no shortage of beautiful wedding songs. You can choose wedding tunes from artists like Blake Shelton, Taylor Swift, and Bruno Mars from this list of the best 2010 wedding song choices. 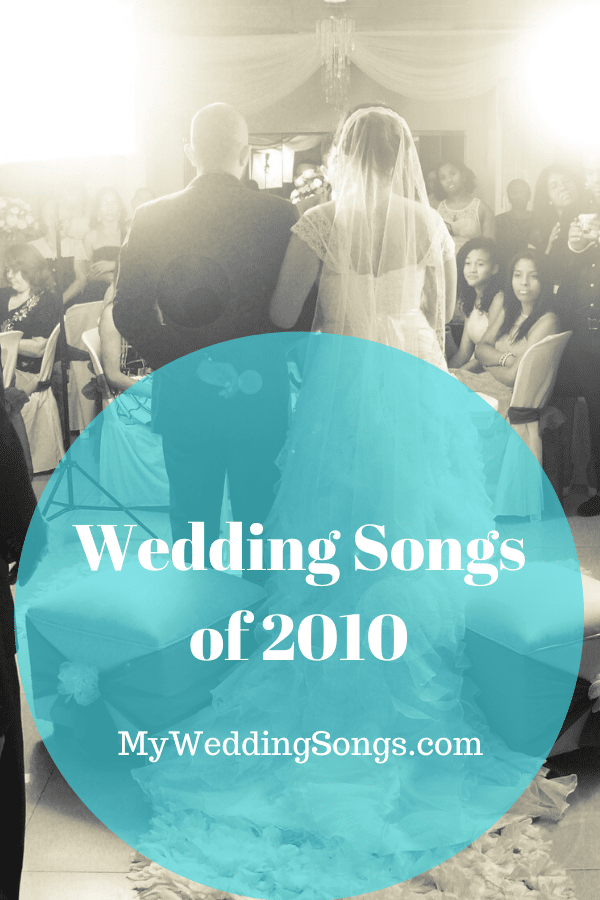 Just the Way You Are – Bruno Mars

Bruno Mars is always a good selection for wedding reception dance music, and this song combines a nice beat with lyrics that celebrate love for a partner. It’s a song that grooms can use to honor their bride with a very special first dance as a married couple.

Today Was a Fairytale – Taylor Swift

Few artists capture romance in their songwriting like Taylor Swift, and young married couples will want to include this 2010 hit on their wedding reception playlist. It is a song that will remind all of your wedding guests how special the day is, and it can also mark the beginning of your very own fairytale romance.

All About Tonight – Blake Shelton

Country artist Blake Shelton sings about living in the moment in this 2010 country hit, a song that often finds its way into modern wedding ceremonies. You can use it as the spotlight dance with your partner at the reception, but it also makes a great choice for the wedding send-off.

“Little White Church” became a massive hit for Little Big Town thanks to its no-nonsense lyrical content, and brides who want to preserve a little bit of sass often use it in their wedding. It’s a song that celebrates the importance of marriage, so find a way to use it in your formal ceremony.

When you find the person you want to spend forever with there is a need to be with them at all times, and Sugarland sings about that in this country song from 2010. The song is best used to introduce the new couple after the vows have been said, but some couples also play it as the wedding guests are being seated.

The smooth vocals of Enrique Iglesias have made this song about devotion and commitment a modern-day wedding classic, and few songs are better for dancing with your new partner. Those who want to be creative may also find a way to use this song as a non-traditional processional at their wedding.

Only Girl (In the World) – Rihanna

On your wedding day, the blushing bride should be the only girl in the world, deserving of all the love and attention that she receives. That is what this Rihanna song proclaims, and the tune should be given a place of honor in the formal parts of a wedding ceremony.

Better Than a Hallelujah – Amy Grant

Amy Grant has long been a favorite of newlyweds who place an emphasis on spiritual values, and the wholesome message of this faith-based wedding song will not be lost on the bridal party or guests. Try using the song to accompany the lighting of a unity candle, or you can also use it as an interlude for the cutting of the wedding cake.

God Gave Me You – Dave Barnes

Many newlyweds want to celebrate the fact that their union has been blessed by God, and this song from Dave Barnes honors that sentiment. It lets your wedding guests know that the two of you were meant to be together, and you should use it to precede the formal wedding vows.

Love means many things to many people, but JJ Heller reminds us in this song that true love is about selflessness and commitment. This is a perfect song to play as your bridal party is walking the aisle to take their places at the altar.

Your Love is My Drug – Kesha

All wedding receptions are defined by good dance music, and this 2010 song from Kesha will give everyone a chance to get up on the dance floor in celebration. It’s a feel-good song that has a modern groove that appeals to the young and the young-at-heart.

The deep baritone of Josh Turner made this song a huge country smash in 2010, and it is still used by couples today for the first dance between the newlyweds at the wedding reception. It is always important to choose wedding songs that have both a strong lyrical message and a positive beat, and this song has both.

Our Kind of Love – Lady A

All couples want to believe that the love they share is special, and Lady A conveys that vibe in this love ballad. This is a song that many couples like to use as an alternative wedding recessional, but it also works well for the reception playlist and dancing.

We’ve only got one life to live and we should live it to the fullest, and that is what songwriter Lee Brice affirms in this sentimental wedding ballad. It may be a little too lively for the actual ceremony, so try having your DJ add it to his list of party tunes.

Love All Over Me – Monica

Monica made this one of her biggest 2010 hits, and the song is a favorite of young newlyweds because it combines a catchy beat with slightly naughty lyrics. The song is still modest enough that you will feel comfortable using it for your wedding reception dancing, and it encourages all to join in the happiness of the day.

The Canadian rapper Drake sings about finding that special one in this song from 2010, and you can dance the night away to it at your wedding reception. It’s a trendy reminder that marrying the perfect partner is worthy of a celebration that will last all night long.

You’re the One – Dondria

The best wedding songs send a message of love in a straightforward way, and that is exactly what this tune from Dondria does. It can be used in various ways during your wedding to let your partner know that they are the only one for you, but you might want to play it as you exit the altar.

You should always have a song or two on the wedding playlist that is sweet dedications to one another, and this one from Nicki Minaj conveys how important your partner is to you. Most couples use it for their first dance as husband and wife, but you can get creative with this R&B hit in your own ceremony.

“Will you share my life?” is a question that is at the heart of all wedding ceremonies, and Kem sings about this in a 2010 R&B groove that hits all the right wedding day notes. Imagine looking into the eyes of your partner as you share that all-important first dance with this song playing in the background.

Everything to Me – Monica

Don’t miss the opportunity to let your spouse know just how important they are by including this Monica hit in your wedding song choices. You should choose several songs that send a private and subtle message to one another, and this one can be a special secret message between you and your forever love.

I hope you enjoyed some of our favorite 2010 wedding songs. If you have a song that you think should be on our list, be sure to comment on it below. Also, check out our list of the best 2010s wedding songs.

Celebrating weddings of 2010. Where were you and what was happening?

Congratulations on your wedding of 2010. You share your anniversary with the following events.

Learn more about 2010 on Wikipedia. Thank you for visiting our page – weddings of 2010.