Skip to content
Home > Wedding Songs by Year > Top 2001 Wedding Songs Because Two People Fell in Love
My Wedding Songs is a reader-supported website. As an Amazon Associate, we earn revenue from qualifying purchases. Purchases made through links on this page may earn us a commission but also support the artists.

2001 wedding songs include meaningful ballads, hymns, and modern spiritual reflections of love that is pure.

Artists such as Steven Curtis Chapman, Jim Brickman, and Enrique Iglesias brought perfection to a year that was filled with songs to use on your special day. 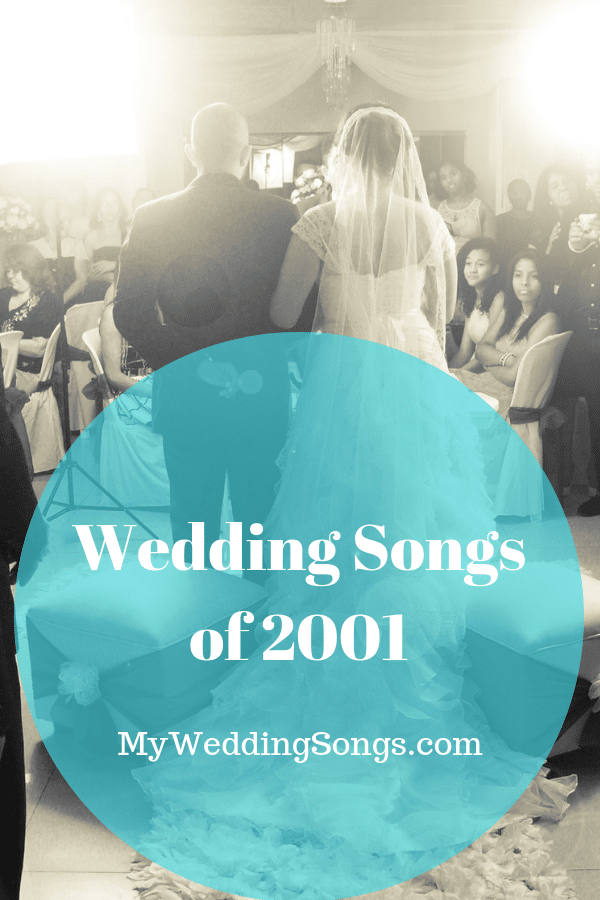 Queen of My Heart – Westlife
November 2001, World of Our Own

And all of our tears will be lost in the rain
When I found my way back to your arms again
But until that day, you know you are
The Queen of my heart

Fewer boy bands were more popular than Westlife in the early 2000s, and this song from 2001 expresses simple devotion from a man to his beautiful new bride. Special song dedications to the bride are often overlooked, so have this one put on the reception playlist just for her.

I can be your hero, baby
I can kiss away the pain
I will stand by you forever

Enrique Iglesias scored his biggest hit of the decade with this powerful love ballad from 2001, a song that grooms will want to share with their new spouse on their wedding day. It is a song that affirms a man’s desire to be everything to his bride, and that he will go to any length to make her happy for years to come.

Pianist Jim Brickman found appeal in the 2000s with both mainstream and Christian audiences thanks to songs like this one, a collaboration with Rebecca Lynn Howard. Brickman’s songs make great choices for those couples who want an alternative to the traditional bridal march.

Peter Cetera sings about creating a perfect existence with a special partner in this hit from 2001. Every married couple enters the wedding day clinging to the promise of a perfect world, and this song reinforces the commitment of newlyweds to make each day better than the last.

Brad Paisley has established himself as one of the most talented songwriters of this generation, and this song from the early days of his career has the emotional lyrics that Paisley is known for. It is very useful for couples who want depth and meaning in every song chosen for their wedding day.

There is a subtle spiritual element to this 2001 hit from country artist Martina McBride, a song that celebrates the blessing of love everlasting. It should be given a place of honor in your wedding, perhaps as an interlude that precedes the lighting of your unity candles.

This was one of the few hits for Ben Folds, and it often finds its way into the wedding ceremonies of kids who grew up during the early 2000s. “The Luckiest” is a song that conveys a sense of gratitude that you and your partner have found the greatest love of all.

Do you need me, like I need you to
And do you want me, like i want you
Are you passing me by or am I standing still

Jewel’s “Standing Still” is the kind of emotional ballad that taps into all the sentiment that is present on your wedding day. It has a nice melody that makes it suitable for a first dance, but the lyrics also inspire couples to use it in their wedding processionals and recessionals.

There Must Be an Angel (Playing With My Heart) – No Angels
August 2001, Elle’ments

No Angels covered this tune originally done by Annie Lennox, and their version finds its way into modern wedding receptions as a dance tune. On your wedding day it is easy to imagine that divine forces had a hand in bringing you and your partner together, so use this song to let your guests know that a higher power was looking out for you.

Isn’t It Love? – Andrew Peterson
2014, After All These Years

This song by Christian artist Andrew Peterson hits all the right notes for newlyweds who want to honor their faith with wedding song choices. It presents romantic love as a gift from God, and it is a wholesome song to dance to if you want something that remains true to your spiritual values.

See the year prior with a list of the popular wedding songs from 2000.

Christian group Avalon released this song of love and faith in 2001, and it has become a wedding staple for spiritual couples today. The song is tender enough that you can play it as your guests are seated, but it can also be included in the selection of reception music.

I’m your imaginary friend
And I know I’m in your prayers
Oh, I’m already there

Lonestar sang about the longing that all couples experience during those wonderful days that precede a wedding, and the song also hints at promises of forever. It is most often used in weddings today as a first dance or as the final dance before the send-off.

Wrapped Up In You – Garth Brooks
October 2001, Scarecrow

The legendary Garth Brooks was still churning out hits in 2001, and this song draws on all the factors that made Brooks such a huge success. It is a simple but profound declaration of love from one partner to another, and it is often played at weddings as the bridal party begins to take up their positions at the altar.

Lionel Richie included this new song on an album of his classic hits in 2001, and it is perhaps one of the most underrated wedding songs of the decade. The lyrics hint at the fairytale love affair that all brides long for, and the melody has a smooth vibe that works for processionals, reception dances, and much more.

Creed was riding high throughout most of 2001 thanks to this hit, a ballad that reflects how far one is willing to go to please the person they have chosen to be their spouse. It can be used to create an emotional first dance between newlyweds, but it might also be played at the close of the festivities.

This song by 4Him is taken directly from the text of the Bible, and it affirms the new couple’s dedication to their Christian faith. Hymns done in a modern style are very appropriate for the formal wedding ceremony, and this one should be used before the vows are recited.

This day all His mercies are new
This day every promise is true
Father, help me to believe
Give me faith I need to know You
And trust You this day

Steven Curtis Chapman scored another gospel hit with this uplifting tune that offers praise for the blessings in life. It is a wedding song for those couples who want everyone in attendance to know that God has blessed the marriage of two people who were meant to find each other.

Also, check out our list of wedding songs by year.

Celebrating wedding songs of 2001. Where were you and what was happening?

Congratulations on your wedding of 2001. You share your anniversary with the following events.

Learn more about 2001 on Wikipedia. Thank you for visiting our page – weddings in 2001.

Have a favorite wedding song from 2001? Please share the song below in the comments.