The Unity Candle Ceremony is a symbol of two people joining as one. Two families unite. Two souls unite. It takes place during the wedding ceremony after the bride and groom exchange their vows. Traditionally, the bride lights a single candle for herself, and the groom lights a single candle for himself. Then, the bride and groom light their “unity candle” together. Choosing the right candle song is important; we have some suggestions. 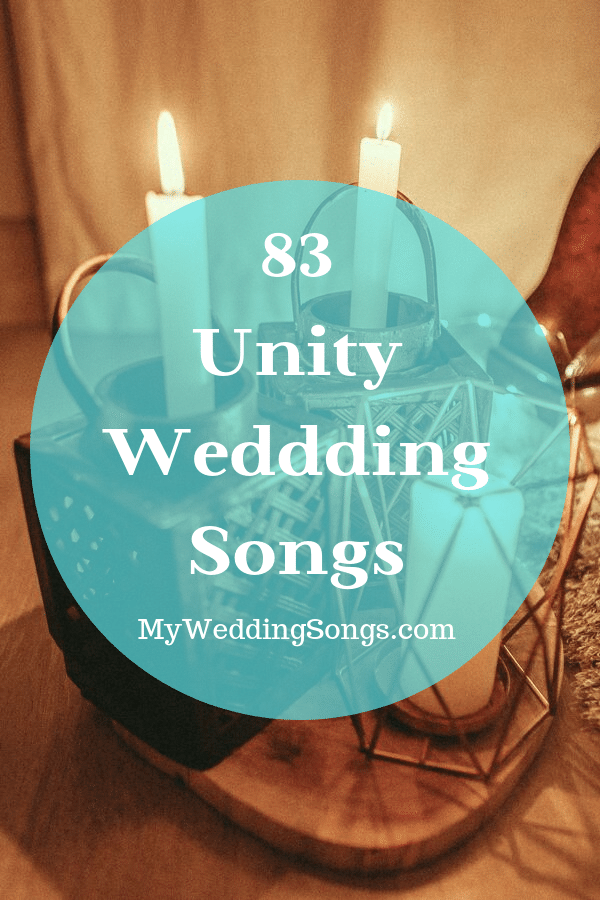 What Is the Unity Candle Ceremony?

The Unity Ceremony isn’t just about the wedding couple. When you marry, you also join families. A great way to involve your parents or grandparents is to have them light the candle for the bride and groom. It’s up to the wedding couple whether or not to extinguish their individual flames are left them lit.

If you choose to honor your extended friends instead of the biological family, the best man and maid of honor can step in. It’s definitely up to you as the wedding couple.

This also works brilliantly in same-sex ceremonies. There is no gender-specific role. It’s about togetherness. One side lights each of their candles and passes that candle to the wedding couple. Their individual flames become one flame. It’s symbolic. It’s beautiful. It’s a tear-jerker. This is why choosing the right song for this part of the wedding ceremony is key.

What Type of Unity Candle is Best?

Unity candles are a big business to candle companies. They come in all sorts of sizes and colors. For the do-it-yourself bride and groom, they can buy a standard candle. Then, the candle can be decorated in your wedding colors with ribbon, beads, and whatever suits your fancy. Unity candles can be purchased as a single candle or in a candelabra setting with a single tapered candle on each side of the official unity candle.

Should I Play A Song During the Unity Ceremony?

This ceremony isn’t long. So be aware of the time. If you choose to not have others participate, it will be even shorter. Talk to your wedding coordinator and professional DJ for great suggestions. The last thing you want to do is stand there awkwardly thinking, “I didn’t realize the guitar solo was so long in this song.”

Traditional wedding Unity Candle songs celebrate the union of the bride and groom. Bridal couples can select romantic pop songs “I Was Meant To Be With You” by Diamond Rio, “True Companion” by Marc Cohn, and “Give Me Forever (I Do)” by John Tesh. Bridal couples can also select instrumental songs perfect for church weddings like “Wedding Song” by Kenny G. Since the candles are being lit, a theme-appropriate song would be “You Light Up My Life” by Debby Boone.

Is There An Alternative to the Unity Ceremony?

The unity sand ceremony can be done after the vows are read as the unity candle ceremony would be. Alternatively, it can be done during the vows — especially if you write your own. The sand ceremony uses multiple sand colors to fill a single glass container such as a vase. The bride and groom take turns filling a glass vase — also known as the unity vase. The sand colors can be coordinated with the bridal couple’s wedding colors. The same unity candle songs below are also fitting for the sand ceremony. (Just don’t pick “Dust in the Wind.”)

This is a great love song in the singer-songwriter category.  If you want to know the background of this song, read our interview with Emily.

This song is not by a superstar singer but this beautiful song has the perfect message for a message of unity during a wedding ceremony.

5. No Matter Where You Are (Wedding Version) – Us The Duo
Originally released in 2020

Even though they did not win the season they were on America’s Got Talent, this song will win over your heart.

Hauser is a cellist and a member of 2Cellos.  He broke out on his own on this widely popular instrumental wedding song.

This Celtic gem fits perfectly into any wedding ceremony.  It can be used not only for the unity candle lighting but also for the rope ceremony or sand ceremony.

2. One + One – Lawson Bates feat. Olivia Collingsworth
Originally released in 2019

If you are looking for a religious song for your unity ceremony, listen to this song as it describes a couple joining together with God.

With more than 15 million views on Youtube, this piano and cello duet is an instrumental cover of one of the most popular wedding songs of all-time behind the “Wedding March”.

Listen to our unity ceremony songs playlist on Spotify.